After relocating from Kauai to North Carolina, Courtney Kelly followed her longstanding dreams with a hobby farm she calls Courtney's Chicken Charms. 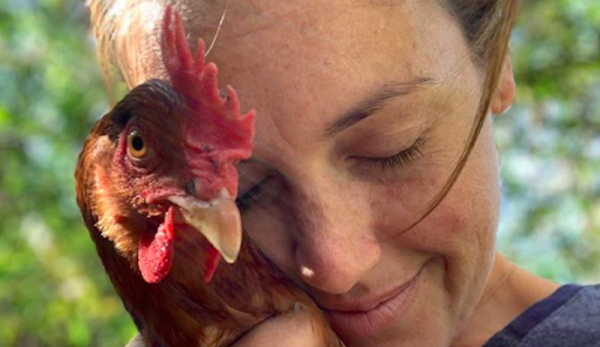 Courtney Kelly cares for a flock of 27 chickens at her homestead in western North Carolina. Naming the venture Courtney’s Chicken Charms, she says that she’s always felt the calling to become “a homesteader in my heart from the beginning of adulthood.”

Chickens have become a central part of Kelly’s hobby farm, which also strives to stay organic and sustainable. She repurposes her birds’ manure into the garden beds, also layering in fallen leaves to build soil. She uses well water on the land. And a cast iron stove inside the house keeps the family toasty during the winter months.

We spoke to Kelly about her love for chickens. She also told us how the birds interact with the four resident felines and a Great Pyrenees dog. We also got into the suspicion that her birds are hiding a secret nest out in the woods.

This sweetie wanted to cuddle all day. Just hanging next to me like a little shadow .. got lots of snuggles all day and this was taken early morning .. I am more of the #sleepyanimal here in this photo for #day17 #fallhomesteadshare #photochallenge . I missed yesterday for #day16.. #bythefire #photochallenge2020 .. we did make a fire but it died.. it was tiny , and my kids didnâ€™t wanna be cold outside waiting on me ?? . . . . #homesteadersofinstagram #homesteadshare #chickensofinstagram #oliveeggersofinstagram #hobbychickenkeeper #courtneyschickencharmfarm #chickenselfie #chickenselfiesunday #âť¤ď¸Źmyfarm #rainbowlayers

A post shared by Motherâś¨Homesteadâś¨Homeschool (@courtneyschickencharm) on Oct 17, 2020 at 7:38pm PDT

Kelly raises her chickens organically. And she originally fell in love with the animals while dwelling on the island of Kauai for around a decade.

“A long time of that was backpacking around the island, living on an organic farm and hearing the echoes of roosters crowing all through the valleys at night,” she recalls.”That sound is beautiful, peaceful. I love it so much.”

After settling in North Carolina, Kelly says that her new chicken goals include having “generations deep of them on my own farm.” She also wants to chase “the egg rainbow for more and more colors.”

Read more: Check out the adorable Serama chickens of Little Farmer Me!

A post shared by Motherâś¨Homesteadâś¨Homeschool (@courtneyschickencharm) on Oct 26, 2020 at 9:43am PDT

Speaking about the rainbow eggs her chickens produce, Kelly says that she’s discovered that “out of all the chicken egg colors you will ever see, all the eggs’ genuine shell colors will either be a white or blue egg. The other colors are what is on top of that primary shell color being white or blue!”

A post shared by Motherâś¨Homesteadâś¨Homeschool (@courtneyschickencharm) on Aug 25, 2020 at 10:06am PDT

Kelly finds eggs laid outside of the coop on occasion, which always makes her curious. “I never know if [my chickens] are hiding a secret nest around in the woods!” she wonders. “I generally talk myself up in my mind that they are laying out there but I just cannot seem to figure out where.”

Introducing The Resident Dog And Cats

A post shared by Motherâś¨Homesteadâś¨Homeschool (@courtneyschickencharm) on Sep 5, 2020 at 4:03pm PDT

Alongside the chickens, Courtney’s Chicken Charms also hosts four kitties and a Great Pyrenees dog. Taking on a role as a livestock guardian, the canine “runs the perimeter and barks at everything” in a bid to “keep my flock safe during the day and most of the night.”

When it comes to the finicky felines? Well, Kelly says that in general they “don’t bother with the chickens.”

(One of the younger cats does sometimes try to play with the chickens, though.)

Read more: There are a few things to keep in mind for keeping chickens safe around cats.

The Joy of Living With Chickens

A post shared by Motherâś¨Homesteadâś¨Homeschool (@courtneyschickencharm) on Sep 25, 2020 at 10:44am PDT

“The surprising reward of raising chickens is how much you can fall in love with them,” says Kelly. “After leaving Kauai, I didnâ€™t realize how much I missed having them around. They are smart and loving animals that show their love back to you. It is so very rewarding having them.”