Soothe, nourish and protect your skin with these easy-to-grow herbs. They can help with dry skin, sunburn, rashes and insect bites. 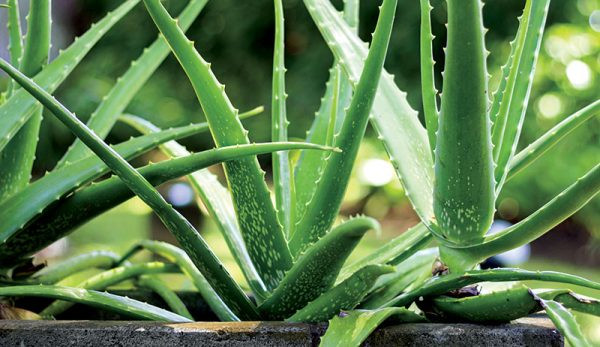 As the largest organ in your body, your skin is exposed to the harshest elementsāsun, wind, bug bites, burnsābut so often, skin care is overlooked until a problem arises. When faced with an itchy rash or sunburn, conditions that affect us all too often, itās reassuring to know you can turn to the plants growing in your fields and in your house for help. These are some of our favorite herbs for soothing and nourishing the skin, and youāll probably find something already growing outside your door, waiting to help.

St. Johnās Wort (Hypericum perforatum) appeared in the work of ancient healers and botanists. It has a very long history of being used to ward off the āevil eyeā and protect against illness. This theme shows up in a number of religions from Ancient Greece through the Middle Ages. Before Christianity in England, the flowers were brought into the house on mid–summerās eve. Later, as Christianity spread, the plant became associated with St. John the Baptist. Some claimed that the red spots on the leaves only appeared there after St. John was beheaded, and they believed that sleeping with a sprig of the plant under their pillows on St. Johnās Eve would guarantee a vision and a blessing. Today, it is still traditional for herbalists to pick their St. Johnās wort for medicine making on June 24 during this annual holy day.

The most popular preparation method is St. Johnās wort oil, which is used topically. The leaves and/or flowers are infused in a carrier oil, such as olive or sesame oil; the process is magical. As the herb infuses, a red volatile oil is pulled out of the yellow flowers and turns the carrier oil blood-red. Itās just about the prettiest formula youāll make each year.

St. Johnās wort is anti-inflammatory and can be used topically for wounds, bruises, varicose veins, sore muscles, mild burns and sunburns. Also, when rubbed behind the ear on a daily basis, it can help to repair the nerves that have been damaged in some hearing issues.

St. Johnās wort got a bit of a black eye some years ago when people became concerned that the plant acted as an monoamine oxidase inhibitor, which affects the brainās neurotansmitters, but in a follow-up study, this was shown not to be the case. There is some evidence that St. Johnās wort can interfere with serotonin levels for those taking selective serotonin reuptake inhibitors, so avoid St. Johnās wort if you are on such medication.

The only other concern with the plant is really more about some of the other species in the genus. It appears that some of them, when heavily grazed by cattle, can cause photosensitivity in the animals. However, it hasnāt been shown to increase the danger of sunburn in people using the plant in appropriate doses.

The use of aloe (Aloe vera) as a medicine was first recorded in ancient Egypt in about 1500 B.C. It has been written about and used for various purposes from landscaping to wrinkle cream ever since. Many of us grew up using the freshly split leaves as a first-aid treatment for burns, cuts and insect bites but otherwise taking the fleshy plant for granted.

The aloe family contains more than 400 different species and is happiest in a semitropical locale. They are known to be hardy in zone 10, which is situated on the very southern tips of a few of our warmer states; everywhere else, aloe lives in pots. Itās propagated by means of fully formed offshoots, which can be cut from the main plant. As they grow, they crowd the top of the pot, which can be a concern with some other plants but not with aloe. This succulent likes to be crowded, so be careful not to give it too large of a pot or it will struggle.

Aloe is an excellent plant to have on hand both for first-aid and for more complicated skin conditions. Break open a leaf to apply to burns, scrapes, sunburns and eczema.

Known as touch-me-not due to the ballistic way that the seed pods spread their seeds, jewelweed (Impatiens capensis) is a very important plant to know for all manners of skin irritation.

Because itās so juicy, it can be difficult to preserve. Some freeze a tea reduction of fresh plants that has been reduced, while some make ointments and soaps. An alcohol tincture isnāt a successful method of preservation because itās difficult to keep the high water content from encouraging mold growth in the final product.

It can work wonders to prevent the spread of poison ivy because it keeps the plantās oils from binding with your skin. While it wonāt heal a rash, it stops the oils from spreading to cause a rash in the first place. Simply walk over to your jewelweed, which often grows near poison ivy, and break off a stalk. In just a minute after crushing and rubbing the plant between your hands, youāll have a moist and thick liquid that can be washed all over any suspected contact areas. This type of preparation is called a succus and can also be created by putting the plant in the blender. A jewelweed soap or liniment would also work, and these can be convenient things to carry with you while hiking.

Jewelweed is also helpful for nettle stings, bug bites and general itching. Itās anti-inflammatory and mildly -antifungal. An ointment of the plant has been used successfully to relieve the swelling and pain of hemorrhoids and the intense itching of athleteās foot.

Even if you had no intention of harvesting it for its medicinal uses, youād be hard-pressed to not want to include calendula (Calendula officinalis), aka pot marigold, in your garden. Itās easy to grow alongside your favorite vegetables and adds a bright pop of color to the garden. You can also make use of it in a variety of skin treatments, including lip balms, facial lotions and salves for cuts and scratches. You can also use it in diaper-rash cream and a remedy against insect bites called Itchy Stix.

It can be used for minor burns, wounds, rashes and eczema. Although gentle enough to be used on a babyās skin, itās tough enough to stamp out the nastiest fungal infections, such as ringworm or athleteās foot. The petals can even be made into a strong tea or poultice to treat shingles. You can keep a jar of sesame oil infused with calendula on handāsesame oil is particularly soothing to the skināso itās ready for any first-aid supplies you want to create.

If youāre easily overwhelmed by this springtime āweed,ā it wonāt be long before youāre singing its praises. Chickweed (Stellaria media) is a wonderful potherb that can be added to springtime salads and soups, but itās benefits for the skin should not be overlooked.

The plantās saponin content rivals the use of cortisone cream when it comes to fighting an itch, such as from a bug bite or rash, though much gentler on your body. As a salve or topical oil, it can be used for rashes, eczema or psoriasis, or poultice it for pus-filled skin conditions, such as boils and abscesses. You might also use it as a bath te for other inflammation in the body. And if you are harvesting nettles from your garden that get you with their dreaded sting, go ahead and reach for some chickweed and let it work its magic.

Your skin takes a beating every day, but by growing and preparing your own herbal treatments, you can keep it healthy naturally. The next time you get that itch (or burn or scratch), reach for your herbs.

This article appeared in Healing Herbs, a 2018 specialty publication produced by the editors and writers of Hobby Farms magazine. Aside from this piece, Healing Herbs includes articles on herbs that can help with pain relief, sleeplessness and stress relief; herbs for teas; how to cut and dry herbs; preparing and preserving herbs; foraging for medicinal herbs; and becoming an herbalist. You can purchase this volume, Hobby Farms back issues as well as special editions such as Living Off the Grid and Best of Urban Farm by following this link.

Dawn is a wife, mother, farmer, author, ethnobotanist, professional speaker and educator. She has over 20 years of ethnobotanical experience, is a certified herbalist and has a B.A. in Botany and Humanities/Classics. Dawn is co-owner of Mockingbird Meadows, the home farm for her educational web channel Heal Local. She is the author of Conceiving Healthy Babies: An Herbal Guide to Support Preconception, Pregnancy and Lactation (New Society Publishers, 2014) and Heal Local: 20 Essential Herbs for Do-it-Yourself Home Healthcare (New Society Publishers, 2015). Rachael Dupree is the former managing editor for HobbyFarms.com. She grows food and medicine on her 50-acre farm near Lexington, Kentucky. When not out working her land, you can find her in her kitchen not following recipes, on her yoga mat in a satisfying pigeon pose, or exploring the worldās nooks and crannies. Follow her on Instagram @rachael_dupree.