STAR Farm owner Kathy Wheeler raises a Kentucky-bred heritage turkey, Bourbon Reds, tells how she got her start selling turkeys to the public. 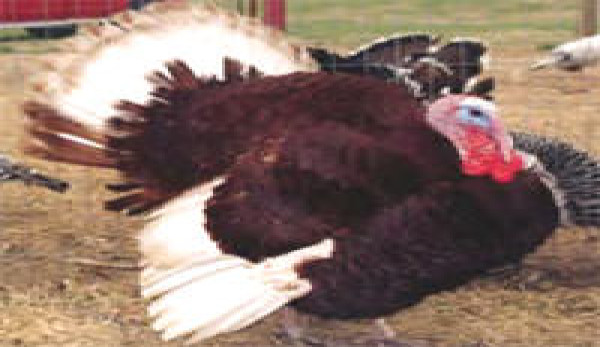 Imagine being able to say that Alice Waters, well-known executive chef and owner of Chez Panisse in Berkeley, CA, will be eating one of your turkeys for Thanksgiving.

Kathy Wheeler, owner of STAR Farm in Hardyville, Ky., is proud to say that one of her Bourbon Red turkeys will take that place of honor this year.

Read about a couple turkey-raisingÂ challenges>>

Wheeler is as thrilled to share one of her turkeys with Waters, (whom she met at the recent Kentucky Harvest Festival, presented by Slow Food Bluegrass and The Sierra Club in Crestwood, Ky.) as she is to share her passion for heritage breeds, as well as local food with her friends, neighbors and others beginning to engage in the local food movement.

Wheeler might be a newcomer to Kentucky, but she sure knows where her heart is. She started raising Bourbon Red turkeys with her husband only four years ago when they moved from their home in the Baltimore, Md.-area to their 32-acre farm in south central Kentucky.

â€śWe both had it in our blood that we would grow our own food and live on a farm,â€ť she says. â€śWe wanted something rural.â€ť

Their deliberate farming adventure began with the two horses they brought with them, ten baby calves and a cow. After aÂ few visits to the Leitchfield area farmers’ market, they acquired laying hens, pheasants and four young turkeys.

Choosing a Heritage Turkey
Wheeler admits to playing favorites with her farm animals. The chickens were her first choice to raise on the farm–and she still raises USDA-certified Cornish Rock Cross–but she soon realized it was the turkeys that charmed her.

â€śChickens run away when you go out to feed them,â€ť she explains, â€śbut the turkeys run toward you. Feeding time is my favorite part of raising turkeys. Theyâ€™re either at the door waiting for you or running toward you.â€ť

After discovering her love of their mischievous and engaging personalities, Wheeler learned about their history; she also visited the ALBC website, which introduced her to heritage breeds of turkeys.

â€śI realized there was a whole other breed of turkeyâ€”and that these beautiful birds were almost extinct!â€ť she says.

This inspired her next foray into raising theÂ Bourbon Red, because, she says, â€śKentuckyâ€”This is your bird!â€ť

She raised 20 Bourbon Reds and decided to begin sharing the turkeys with her family and friends. At one family gathering, she says, â€śWe even did a taste test between the commercial turkey and the heritage turkey!â€ť

Selling Turkeys to a Chef!
Not long after, Wheeler got a phone call from executive chef and SlowFood Bluegrass leader Mark Williams, who found her STAR Farm information on theÂ KentuckyÂ Department of Agriculture website.

â€śHe wanted to know if I had turkeys to sell,â€ť she says. Williams’ call was the start of yet another business venture–providing food to local chefs.

In the spring of 2006, Wheeler raised 25 turkeys for Williams, most of which he prepared and sold ready-to-eatÂ to customers. This past spring, she raised 70 turkeys. Twenty-five went to Williams, her boss bought 10 and several more have been order over the phone. As of mid-October she had aboutÂ 20 more left to sell.

Where Wheeler gets the energy to do what she does cannot easily be explained. She and her husbandâ€”a truck driverâ€”both work full time. But thereâ€™s not a bit of stress or tiredness in her voiceâ€”rather she expressed pure passion for her animals.

She keeps an attitude of appreciation, even as her business appears poised to grow, she says, â€śWeâ€™re still small. I still want to see the turkeys to run to my door at feeding time.â€ť

Wheeler takes the day-to-day tasks of running a business in stride. She understands the need to plan for the cost of feed and pens for her poultry, noting that they typically need to purchase less feed. By allowing the animals to feed themselves on the bugs and greens around the farm, they donâ€™t eat as much feed.

A major challenge for WheelerÂ comes at processing time. Thereâ€™s only one USDA-inspected processing plant for the tri-state area for farms her size. She wishes there were more.