The Hidden History In An Old Pile Of Bricks

A lot can be learned about old farms by the items the previous owners have left behind, including an ordinary pile of bricks. 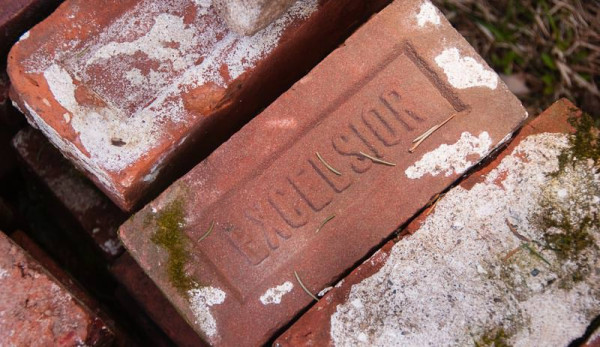 Anyone that has lived on an old farm knows that evidence of the farmâ€™s history is often left behind by the previous owners. Sometimes there are a few dusty tools left hanging on nails in the barn; other times, there are large rock piles on the edge of fields that showcase the effort involved in clearing those fields. And once in a while youâ€™ll come across something really unusual, like the remnants of a Model T car spread all over the rock piles. (Yes, Iâ€™m familiar with this!)

Last year, I discovered a few loose bricks piled next to a tree, covered in pine needles, leaves and dirt. I didnâ€™t think much of it at the time, except that I intended to use them for aÂ decorative project becauseÂ they were impressively weathered from old age. Earlier this spring, I decided to gather them up and haul them to a better location where I could clean them and prepare them for use.

So bringing my trusty yard cart and a digging shovel, I went to the brick pile and started pulling them out of the ground. Five here, five there â€¦ five more â€¦ wait, is that another 10? Noâ€”20? Umm, just how many bricks are piled here?!

Before long, I had astonished myself by pulling well over 100 bricks out of the ground. Naturally, they were in varying levels of decayâ€”in fact, some were broken in multiple places. But others were in surprisingly good shape; good enough that I could clearly see that some of the bricks were stamped with the word â€śExcelsiorâ€ť and others were stamped with the word â€śRingle.â€ť

Now curious about the bricks and assuming that the words referenced the manufacturers, I started doing some research about old brick companies in my home state of Wisconsin. Before long, I had turned up a whole treasure trove of information about these long-gone manufacturers, particularly the Excelsior Brick Company in Dunn County, which was apparently the brick capital of Wisconsin for many years. In fact, during the early 1920s the Excelsior Brick Company and the nearby Red Pressed Brick Company produced more than 12 million bricks per year!

ToÂ me, the most fascinating information I came across is that neither Excelsior nor Ringle have produced bricks since the early 1940s, meaning that the bricks I discovered are more than 70 years old. How long have they been on this farm, and how long had they been sitting in a forgotten pile?

Itâ€™s not hard to make a case that the bricks have been on the farm for more than 70 years. The barn, built in the 1930s, has a row of bricks above one of the doors, and while I canâ€™t see if they have writing on them, they appear to be the same size and color as the bricks I found in the pile.

Itâ€™s also easy to see that they had been piled on the ground for a long time. While the topmost bricks were protruding from the ground, the bricks underneath were set several inches into the groundâ€”clearly a lot of leaves and pine needles had piled up around them over time, and it would be my guess that decades had passed since the bricks had last been disturbed.

Who knew that there could be so much history hidden in a pile of old bricks? Needless to say, Iâ€™m going to be doing some more research.