With a dream of making and selling goat's milk gelato, Andrew and Blake Place of Hidden Pastures Goat Dairy won funding to make it real. 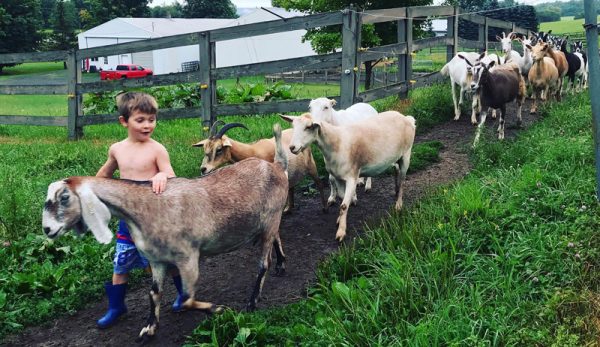 Andrew and Blake Place took their chances on an awards program, and the payoff allowed them to bring their goat’s milk gelato production online.

Getting into the commercial dairy goat business is risky right now, according to Blake Place. She and husband Andrew operate Hidden Pastures Goat Dairy in Glenfield, New York.

The couple launched their commercial goat dairy business in 2017 after first owning two pets. Their initial milking herd was 20, and at their peak they milked 160 goats for fluid milk, gelato and cheese on a 100 acre-farm just two hours from the Canadian border.

“We have significantly buckled down to weather COVID-19 and the lack of markets for fluid goat milk,” she says. “We have been focusing on more value-added products, and we’ve been able to do that because of the Farm Bureau award we won.”

“I’m always dabbling in the hobby end of things, and we decided to make it a business,” she says. “That helped us launch so I could leave my job and work on the farm.”

Learn more about how to choose the right breed of dairy goat for your farm.


Making It A Priority

The odds of winning a nationwide contest can feel like a longshot. There’s also a never ending to-do list that makes it appear there’s no time to complete an application.

Even Place’s husband didn’t think it was worth the time to apply for the Farm Bureau Ag Innovation Challenge.

“It was the last thing I should have been doing,” she says. “We were going 110 miles per hour, but I just sat down and did it.”

Aside from making the time, Place believes that her transparency in the application and their unique idea for a gelato made from goat’s milk sealed the deal. Looking for a way to differentiate a farm business from others providing similar products is key to standing out in an application and for creating a successful business model, according to Place.

“You can’t go forward without trying something,” she says. “At least trying gets you going in the right direction.”

With the cash award, Place purchased milking equipment, developed a goat’s milk gelato product, put it through testing and created the packaging and marketing.

In addition to the funds, Place also received an all-expenses-paid trip to Nashville to attend the American Farm Bureau Convention. There she met other farm entrepreneurs, which she says was invaluable in building her business.

“People don’t realize how much goes into creating a new product,” she says. “It’s a lot more than just turning the milk into gelato.”

It isn’t too late to apply to the seventh annual Ag Innovation Challenge. Applications are accepted through July 31, 2020. Ten startups will be selected to compete at the AFBF Annual Convention in January 20201 as Semi-Finalists.

Four finalist teams will advance and be given three minutes to pitch their business to a panel of judges. Presentations will be livestreamed, and viewers will vote for the People’s Choice Award winner for a total of $20,000.

Additionally, a 2021 Farm Bureau Entrepreneur of the Year will be selected and will receive $50,000.

Check out these 5 ways to maximize your dairy goat’s lactation cycle.

Thinking Outside the Box

“We are doing more value-added things on the farm as we figure out how to adapt,” she says.

In addition to selling gelato and soap on-farm, they have added goat yoga, farm yoga and other activities to make up for the fact that they are currently unable to bottle milk.

Place also launched a Goats In Pink Collar campaign, #goatsinpinkcollars, with 100 percent of the donations going to the local hospital. She also worked with volunteers to start @lewiscountyfarm to donate farm products from the area to community members in need.