The discovery of an aerial photograph from the 1930s allows one farmer to turn back the clock and learn more about the history of his farm. 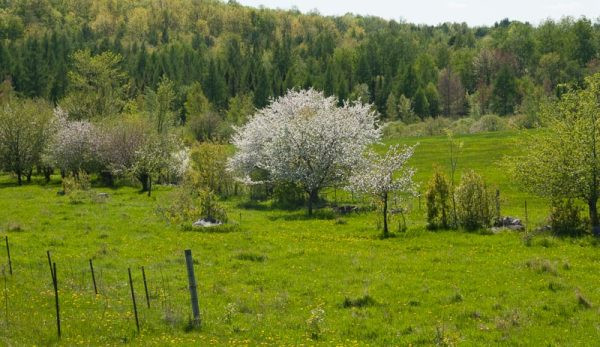 Time passes, and things changeâ€”sometimes slowly, sometimes quickly. Through the years, a farm can change significantly. I can vouch for this from personal experience. My farm in northern Wisconsin has seen some buildings come and others go over the past 25 years. I’ve planted new fruit trees and watched old trees fall.

Rocky fields transitioned to blackberries, birch trees, quaking aspens and conifers. Others have been reclaimed from the teetering edge of wilderness and are now productive hayfields.

My farm was originally settled more than 100 years ago, and Iâ€™ve often wondered what it must have looked like decades ago. Clues can be found everywhereâ€”in the rock piles overgrown with grass that line the edges of the field, in the rotting stumps of long-gone trees, in the obvious transitions between elderly stands of hardwood trees and the young conifers growing up around them.

Well guess what? Sometimes wishes come true! I was recently shown an aerial photograph of the area surrounding my farm, taken by airplane in the late 1930s. The resolution is surprisingly highâ€”high enough to pick out individual trees in many cases. And my farm appears crisp and clear in the image.

Looking Back in Time

Itâ€™s remarkable to scrutinize the black-and-white photograph and effectively turn back the clock by more than eight decades. Unlike a single photograph taken at ground level, this image provides a snapshot of the entire farm from a time less than 20 years after its settling.

Examining the photograph, I can see the old farmhouse, barn and a couple of sheds right where theyâ€™re supposed to be. Interestingly, the old farm garage (now a barn) had yet to be built. And the farm pond was just a low-lying field.

The rows of coniferous windbreaks are nowhere to be found. This makes sense, since Iâ€™ve counted the growth rings on fallen specimens and dated them to the 1940s. Instead, the area surrounding the farmhouse is clearly dotted with small treesâ€”almost certainly fruit trees. A few very old apple trees still occupy spots evident in the aerial image.

The more I study the photograph, the more revelations burst forth. I see the big sugar maples still standing proudly stand in the middle of the farm fields. They’re a bit smaller and more numerous but already at impressive sizes in the photograph. This confirms my long-held belief that theyâ€™re more than 100 years old.

Off in the corner of my farm, there are many sugar maple and yellow birch trees thatâ€”todayâ€”give the impression of being old-growth trees. The fact this corner is clearly a wooded forest in the 1930s suggests they are indeed very old trees.

Read more: Look, then plan before repairing an old pond.

A History in Fruit Trees

The impressive number of apparent fruit trees around the old farmhouse is equally interesting. They are visible in tidy rows and columns. This gives me a greater understanding of the numerous old stumps around the farmhouse.

Iâ€™ve removed many of them through the years (quite rotten), but I still remember their approximate locations. In retrospect, they ran parallel to the surviving apple trees. So the stumps likely marked the locations of old fruit trees.

You might wonder why a black-and-white photo from eight decades ago matters to my farm today. Certainly satisfying my curiosity has been fun, but thereâ€™s more to it than that.

My farm still thrives some 80 years later, but several other farms visible in the 1930s image have faded away with the passing of time. Their fields all returned to forestland and their buildings are long gone. It reiterates the specialness of living on a farm with such a long history.

Plus, seeing how the farm has changed over time inspires me to spark changes of my own. After seeing what the old farmyard orchard looked like in the 1930s, Iâ€™m intrigued by the thought of planting new fruit trees in that area. Perhaps I’ll grow heirloom varieties from that time.

I could even cut scions from the still-surviving apple trees and use grafting to propagate new specimens with the same genetics. This would potentially carry on the orchard legacy for another 100 years.

If you live on an old farm, why not conduct some research and see if you can find an aerial image from decades ago? Perhaps you can find one online or in a state library.

Turning back the clock by analyzing a historical snapshot of your farm is a fun way to spend an afternoon. And you never know what exciting details you might uncover.