Historic Henhouse: Would You Take Coop Advice From 100 Years Ago?

It turns out that a lot what authors advocated in the early 20th century, when many Americans kept backyard chickens, still holds true today. 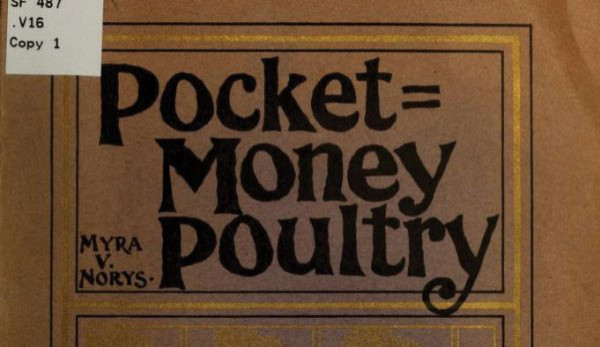 If you plan to build new digs for your chickens and you want sound advice, check out some old-time materials written when most folks in the country kept chickens in their backyards or on small farms. Much of the advice still proves worthy todayŌĆöeven though itŌĆÖs more than 100 years old.

In 1901, Myra Norys wrote Pocket Money Poultry, a guide for women who raised chickens to sell the eggs. She seemed amused by how much of the poultry information during her time described what was supposed to be a ŌĆ£womanŌĆÖs poultry-house.ŌĆØ

ŌĆ£The idea underlying it was that a womanŌĆÖs long skirts unfitted her to enter a building where there was necessarily more or less filth, and the building described was to be made so that she should not need to enter it,ŌĆØ Norys wrote. ŌĆ£It was small enough to be cleaned from the outside through a drop door, the floor being raised, not to necessitate too much backbreaking work. Possibly, this might do for very small work with a very few fowls, but the poultry mistress who did not enter the houses could hardly have sufficient grasp of her business to insure success.ŌĆØ

Norys had her own ideas of what made a poultry house more suited to a ŌĆ£femaleŌĆØ chicken-keeper during that time: ŌĆ£Perhaps the best way to adapt a poultry house to a womanŌĆÖs needs is to make certain of absolute simplicity and convenience in its inside fittings,ŌĆØ she wrote. ŌĆ£The necessities are roosts and their platforms, nest boxes, drinking vessels and feed troughs, grit and shell containers, and dust baths. Whatever is on the floor soon comes to be a nuisance, for it is disturbed and fouled by the birds, besides being in the way. Nest boxes are better at a little height than if placed upon the floor.ŌĆØ

ThatŌĆÖs sound advice for any chicken keeper, male or female. Norys continues to explore the coop interior, noting that feed troughs should not be subject to overturning, roosting or befoulment of any sort. She even described a way to build a feed trough.

ŌĆ£A feed trough ŌĆ” may consist of a single board, with a furring of lath about the edge,ŌĆØ she wrote. ŌĆ£This may be hinged to the side of the building, about 8 inches from the floor. Eight inches above it may be stapled a wire frame, a little wider than the board, and made like one leaf of a wire gridiron without the handle. When the hens are feeding, the board is at right angles to the wall, the wire frame dropped at an angle over it. After the fowls have finished, both trough and frame are raised and hooked to the wall. Such a trough needs very little cleaning, for the average hen does this part of the work very well!ŌĆØ

These wall shelves, as she described, did need a little support below, which she advised be furnished by attached legs or including a small box underneath them. 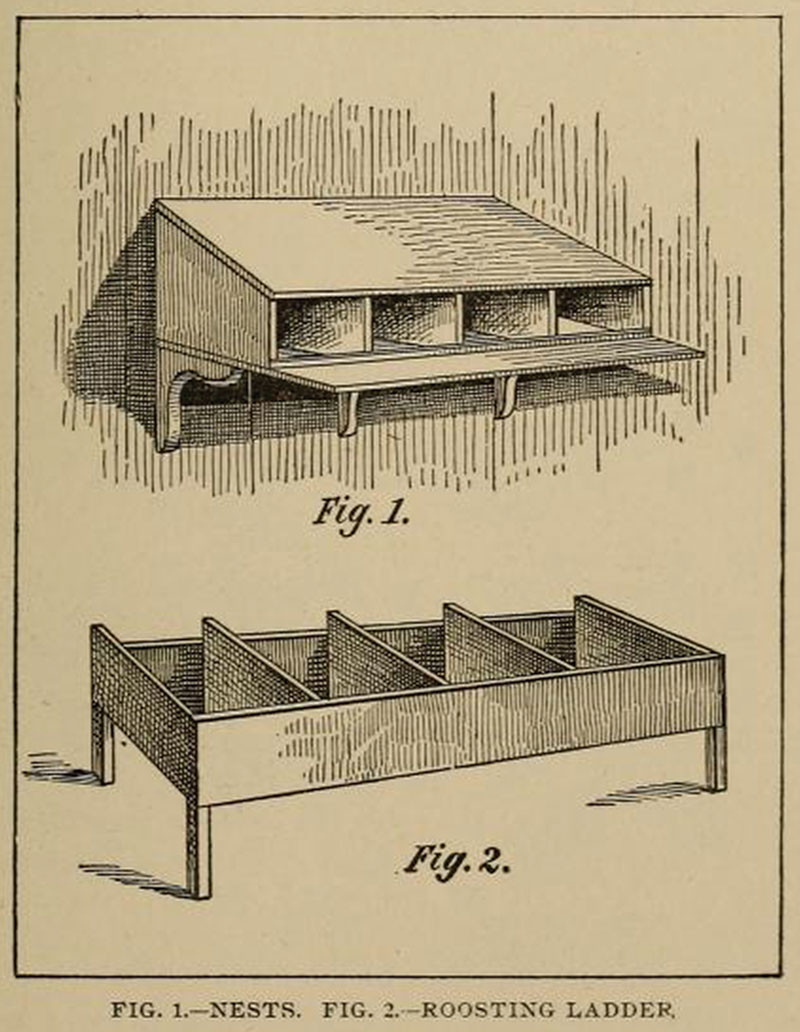 For sleeping, Norys suggested a simple modified ladder roost: ŌĆ£I do not mean the old style of ladder roost, one portion of which is higher than the other, but something like a ladder laid horizontally. On this, the hens can roost compactly, yet without crowding, especially if the ŌĆśrounds,ŌĆÖ which are flat, are a little wider than the sides of the ladder, rising above the sides and seeming to divide them into spaces.ŌĆØ

If the roosting platform, when in position, is set to slightly slope toward the front, it can be cleaned much easier. The roosting frame and its platform, as described by Norys, has another advantage: It can be moved out of the way during the day.

For the nest boxes, she relied on a series of boxes placed on a level against the side of the house, with sufficient space to allow the hens to enter at the back. A single drop-door at the front gives the chicken keeper easy access to the eggs.

Norys recommended that nothing be kept on the floor except the dust-bath box, which should be moderately large and deepŌĆöŌĆ£so that the hens can really wallow in itŌĆØŌĆöand kept in a sunny location.

ŌĆ£With these fittings, it takes but little time to care for the houses, a large proportion of the vexations of poultry keeping are avoided, cleanliness is insured, and all the work made comparatively easy,ŌĆØ she wrote. 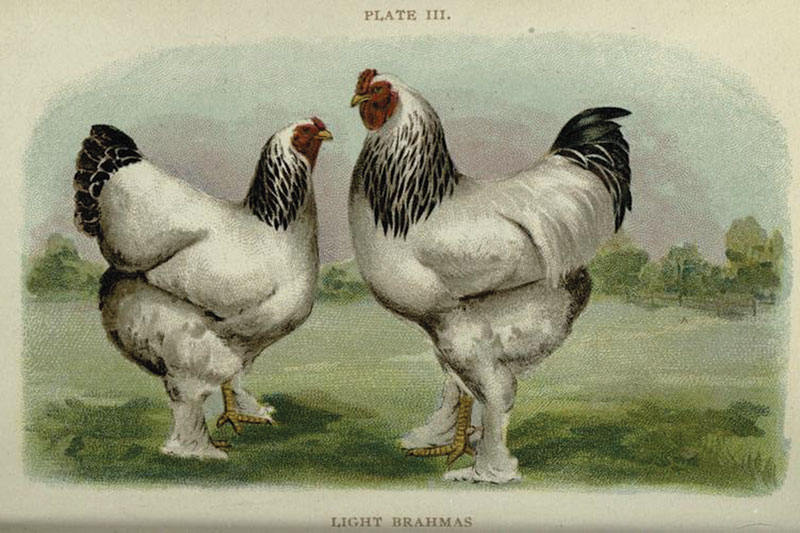 When positioning your chicken coop, Perkins suggested that it face either south or east, preferably south, to permit a maximum amount of sunshine to enter the coop during the greater part of the day.

ŌĆ£The windows of the coops should be placed as high in the front of the building as possible,ŌĆØ he wrote. ŌĆ£This will permit the sunshine to reach farthest back in the coop, especially during the winter months. Care should be taken not to put too many windows in a coop, or it will be cold, particularly at night.ŌĆØ

Perkins explained that glass radiates heat at night as rapidly as it collects it in the daytime. With the windows properly placed, about 1 square foot of glass surface can be allowed for every 16 square feet of floor area.

ŌĆ£Floors may be put into the coops if desired, but they add considerably to the cost,ŌĆØ he wrote, noting that you could instead just keep them covered with sand or straw at all times. ŌĆ£Concrete floors are sanitary and usually rat-proof but are very cold in winter and in this respect may interfere with a good egg yield. A good dry dirt floor will generally give the most satisfactory results, all things being considered.ŌĆØ

Perkins noted that fences should be of 2-inch mesh wire for grown fowls. For little chicks, 1-inch mesh is necessary, at least the first 2 feet up. Today, we have hardware cloth with smaller holes that is even more protective.

ŌĆ£When the poultry house is so situated that the fowls can have the run of the barn yard and cattle sheds, the poultry shed will not be necessary. I know that much has been written against allowing fowls to run in barn yards and scratch in manure piles, but all the same, hens take to such places as naturally as ducks take to water ŌĆ” I have never yet seen any sickness that resulted from allowing fowls to run in well-drained, well-littered barn yards and cattle sheds.ŌĆØ

Free-ranging is still a popular option. For more about it, read ŌĆ£Into the Great Wide OpenŌĆØ on page 42. It seems that certain advice stays relevant regardless of age.