Incubators were all the rage in the early 20th century, but plenty of advice also existed on incubation and hatching via broodies. 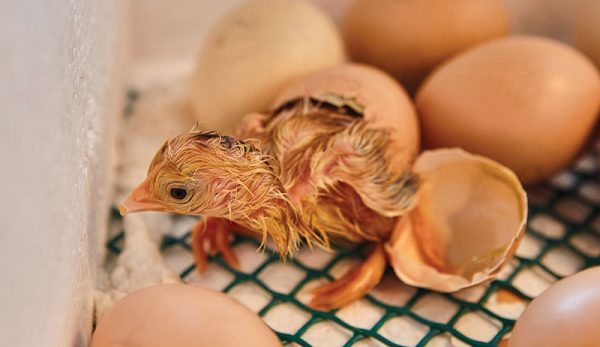 Artificial incubation of eggs is nothing new. The ancient Egyptians hatched eggs in mud-brick huts at least 3,000 years ago. The Chinese were artificially hatching eggs around 250 B.C.

The first American incubator was invented in 1844; it and competitors that soon followed hatched up to 360 chicks per batch. In Buffalo, New York, in 1896, Charles Cyphers invented a large-capacity, room-type commercial incubator capable of hatching 20,000 duck eggs; he also patented a lamp-heated, multilevel brooder that could brood 300 ducklings or chicks. Cyphers marketed smaller, farm-size incubators, too. However, not all poultry keepers liked these artificial hens.

Myra Norys wrote in Pocket-money Poultry (1901) that the rage for artificial incubation was getting to be almost equal to the rage for bicycles and worse among women.

â€śWhen incubator makers, and the itching for experiment, together tempt the child of tender years, and the woman of 75, into raising machine-made chicks, it is time for someone to call a halt,â€ť she wrote. Norys didnâ€™t have an issue with incubators used in the commercial poultry industry but believed they had no use on a family farm at the time.

Others, such as Myrtle Wilcoxson, author of Common Sense on Poultry Raising (1906), liked incubators very much. â€śAnyone who has had much experience with sitting hens will readily appreciate the advantage of incubators in place of hens,â€ť she wrote. She laid out several reasons why they were appropriate, many of which still ring true today:

Jacob Biggle espoused mechanical and natural incubation in The Biggle Poultry Book (1919). (See Historical Henhouse in the January/February 2018 issue for more about Biggle and his farming books.) â€śThe modern man-made hatcher, the incubator, is largely used for winter hatching when hens rarely become broody, and also for hatching on a larger scale than is convenient with the natural mother,â€ť he wrote.

â€śWhile the names and makers of these machines are numerous, they are divided into two general classes, those warmed by hot air, and those warmed by radiation from a tank of hot water, the heat being supplied in both cases by a lamp flame or a gas jet, a very few are still made that are heated by drawing off the coolest water from a tank and pouring in hot water as required. Each kind and each make has its friends and nearly all are fairly successful.â€ť

He went on to offer tips as appropriate today as they were a century ago.

Biggle also offered tips about incubation and hatching eggs with broodies, stating that nearly all the medium-to-larger breeds at the time were persistent sitters. He noted that Cochins were by nature the most quiet and gentle, and they had the most developed motherly instinct.

â€śWhatever the breed, it is best, as a rule, to select for sitters and mothers, medium-sized hens, and such as are not too fat and clumsy,â€ť he wrote. â€śIt is an advantage, also, to have those that are gentle and will not fidget and fight and break their eggs. Wild, squalling hens are a nuisance.â€ť

Biggle always put the eggs under the hen for incubation after dark, unless she was known to be perfectly gentle and trustworthy. His preference for feed for sitting hens was corn. â€śWith corn, water, gravel and a place to dust supplied, they will need little else,â€ť he wrote.

Another fine book that discusses natural incubation is Ernest Cobbâ€™s The Hen at Work (1919). â€śAs spring approaches, make up your mind where you can best put biddy away in seclusion for three weeks,â€ť he wrote. â€śQuiet and freedom from disturbance are essential.â€ť

Cobb advised not having two hens sitting where they could visit together, and laying hens were to be kept strictly away. â€śSitting hens have hasty tempers, and a first-class fight will turn a sitting of eggs into a second-class omelet,â€ť he wrote. â€śIt is well to lift and handle and talk to a broody mother of the heavier breeds, now and then, unless she resents it, as she will grow more friendly, and her chicks will be easier to handle. Scary hens have wild chicks, and wild chicks are hard to develop in the right way.â€ť

The date when the eggs are covered should be written down, and after the 18th day, the sitting hen’s incubation should not be disturbed in any way, Cobb advised.

â€śThe chicks will frequently begin to appear about the 20th day, and hatching may continue for two days more,â€ť he wrote. â€śSome will leave the nest on the 21st day, but most mothers will wait a day or so to give every egg a fair chance and leave with her brood about the 22nd or 23rd day.â€ť

Real hen or artificial means, you decide how to hatch your flockâ€™s fertile eggs. Both options have done the job well for a long, long time.

All the vintage poultry books weâ€™ll be discussing in coming issues of Chickens magazine are available from the Biodiversity Heritage Library, a consortium of libraries dedicated to making digital a huge array of old-time natural history and agricultural books and journals so theyâ€™re available as free downloads to anyone who wants to read them.

There are more than 200,000 titles available, more than 50 general-interest poultry books, and a plethora of books just about chickens, including breeds and bantams, geese, ducks, turkeys and guinea fowl. Itâ€™s a resource every poultry keeper should use.