A History Of Tractors & What’s To Come

Tractors have come a long way since early steam-powered models. And the machines' history can help us determine our own farming needs. 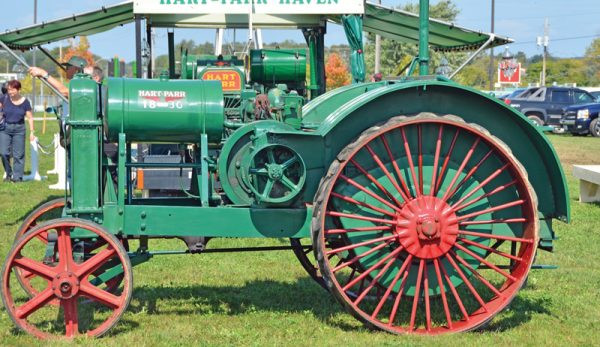 They say necessity is the mother of invention. This has certainly been true with the development of modern tractors.

Through the years, innovative engineers have contributed their insights and inventions to push tractors forward and give farmers the technology they need. Along the way, countless farmers have seen their productivity and safety improve as groundbreaking developments such as the rollover protection structure, three-point hitch and hydrostatic transmission have become commonplace.

In this day and age, with versatile tractors of every size and strength available to fit our needs, it can be easy to forget how far we‚Äôve come.

The Days of Steam

Peruse through photos of the first tractors that gained widespread use on American farms, and you might notice that they bear a greater resemblance to old-fashioned steam engine locomotives than modern tractors.

This is hardly surprising. In the days before internal combustion engines revolutionized transportation, tractors‚ÄĒjust like trains‚ÄĒwere powered by steam.

Steam tractors were a natural progression from the stationary steam engines used to power farm equipment during the 1800s. These engines, often pulled from one location to another by horses, were designed to transfer rotational power to other stationary machines‚ÄĒsuch as threshers‚ÄĒby means of leather belts.

Before long, attempts were made to incorporate steam power into the challenging job of tillage. In America, focus was placed on developing self-propelled steam engines capable of pulling implements‚ÄĒsuch as plows and harrows‚ÄĒby means of a drawbar.

The result? The traction engine, or the steam tractor as agricultural-specific machines came to be known.

Steam tractors weren‚Äôt perfect. They were very heavy, which ran the risk of compacting soil. They were challenging to operate, requiring multiple people to stoke the fire, maintain the water supply and oversee steam pressure.

And there was always a risk of the boiler exploding if steam pressure built up too high.

Steam tractors gradually gained a foothold in the ag industry. They remained in widespread use through the first two decades of the 20th century.

But a new technology on the horizon soon changed the landscape of American farming.

Tackle these 5 spring tasks with your tractor.

The rise of the internal combustion engine signaled the end of the steam era.

As the 20th century dawned, the Ford Motor Co. stood poised to bring mass-produced automobiles to the American public. And other manufacturers got busy incorporating simple gasoline-powered engines into agricultural tractors.

A milestone came when engineers Charles Hart and Charles Parr joined forces and founded the Hart-Parr Gasoline Engine Co. in 1901. One of their earliest models‚ÄĒa 7-ton behemoth known simply as the ‚ÄúHart-Parr #3‚ÄĚ‚ÄĒ¬†lives on at the Smithsonian National Museum of American History.

Early Hart-Parr tractors bore little resemblance to modern tractors. With their steel wheels, spinning flywheels, canopied roofs and oil-cooled radiators, they must have seemed like science fiction worthy of a Jules Verne novel.

But the Hart-Parr tractors offered countless advantages for farmers, whether they were accustomed to steam tractors or horses.

‚ÄúHorses are too expensive for the modern farmer to feed and care for when a Hart-Parr tractor will do more work than 22 first-class horses and do it better, cheaper and quicker,‚ÄĚ Hart-Parr advertised in the Grand Forks [North Dakota] Herald of July 19, 1910.

‚ÄúIt costs you nothing when it‚Äôs not running and takes up little room ‚Ä¶ It starts instantly and runs at little expense.‚ÄĚ

Another advertisement promoted the superiority of Hart-Parr tractors over their steam-powered counterparts.

‚ÄúBeing [oil] cooled, you are independent of the water supply and dispense with from one to two teams and as many men,‚ÄĚ the company noted in The Southwest Farmer [Wichita, Kansas] on August 27, 1909. ‚ÄúThe Hart-Parr Gas Tractor is always ready. No delays and no expense when not in actual operation. Can be used in fields and on roads where the heavy steam traction can not go.‚ÄĚ

Hart-Parr also coined the term ‚Äútractor‚ÄĚ in 1907 as a way to market and distinguish their traction engines from rival machines.

The mass-produced Hart-Parr tractors proved successful and helped usher in the modern era of tractors. As other manufacturers joined the market‚ÄĒincluding Ford, with the incredibly successful Fordson‚ÄĒthe design of gasoline-powered tractors slowly shifted.

In terms of size and shape, they transitioned from massive locomotives into smaller, lighter machines more readily identifiable as ‚Äútractors.‚ÄĚ

Rubber tires replaced steel wheels with lugs, which could be damaging to soil and paved roads, in the 1930s. Electric starters followed suit, replacing the hand cranks used on older models.

Modern power take-offs were developed as an improvement over their belt-focused predecessors. They allowed tractors to provide rotating power to implements even while on the move, an important step forward for fieldwork.

Three Cheers for the Three-Point Hitch

Perhaps the single greatest leap forward for tractors and agricultural equipment was the invention of the three-point hitch.

In the early days, implements like plows were attached at the drawbar and pulled behind the tractor. The problematic design made it difficult for the tractor to gain enough traction under challenging conditions.

It was also possible for a tractor to flip over backward if the plow struck an immovable object, a deadly hazard for drivers.

Then Harry Ferguson entered the picture. An Irish engineer passionate about anything with an engine, he had already made history in the world of aviation. In 1909, he became the first Irishman to build and fly an airplane.

Ferguson eventually turned his attention to tractors. He concluded a rigid connection between tractor and plow would solve the traction and safety issues facing farmers.

In the 1920s, after years of experimenting, Ferguson patented the hydraulic three-point hitch.

The benefits were huge. The rigid connection transferred the weight of the implement and the forces of plowing directly to the rear wheels of the tractor.

This sharply increased traction while eliminating the danger of flipping over. As a result, lightweight tractors could achieve the same traction as heavier models, reducing soil compaction.

The hydraulic lifting arms were similarly innovative and time-saving. When a farmer finished working one field and wanted to move on to another, he could simply raise the hydraulic arms from the seat of his tractor.

This lifted the implement out of the soil and allowed the farmer to continue on his way without another thought.

The result was the Ford-Ferguson 9N, introduced in 1939, and later the bestselling 8N.

These game-changing tractors proved incredibly popular with farmers. They also sparked other manufacturers to join the fray with similar hitches of their own.

Later, once Ferguson‚Äôs patents had expired, the design of the three-point hitch was standardized across all manufacturers. This move allowed for universal compatibility between brands, tractors and implements.

Check out these 4 helpful (and unusual) tractor implements.

Tractors continued to improve by leaps and bounds in the decades following World War II. Diesel tractors gained a foothold in the market thanks to their greater power and torque. Eventually, they rose to replace gasoline engines in most utility tractors.

Cabs arrived to provide operators with greater comfort and protection from dust and noise.

Instead of restricting farmers to a certain number of speeds (‚Äúgears‚ÄĚ), hydrostatic transmissions allowed tractors to achieve an infinite number of speeds between zero and their top speed. Even better, the use of intuitive foot pedals for controlling speed and direction of travel simplified the operation of tractors.

This eliminated the need to depress the clutch and switch gears.

As new features and technologies were developed, tractors began to proliferate in sizes. The general-purpose utility tractor branched off in multiple directions.

For cultivating crops over hundreds or thousands of acres, high-end tractors with 400-horsepower engines pulled and powered the largest and most efficient implements.

On the opposite end of the spectrum, compact utility tractors and subcompact tractors redefined the capabilities of small-scale machines, packing a surprising amount of power and versatility into affordable packages.

Along the way, the production and distribution of tractors became a global industry.

In many ways, farmers 100 years ago had an easier time choosing a tractor to purchase. Limited options and features existed on the market.

Nowadays, with an endless variety of tractors to choose from in multiple size and strength categories, how can you find the best machine for your needs?

The first step is to realize bigger isn‚Äôt always better.

You might dream of driving a utility tractor with a cab and 150 horsepower. But will you mainly push dirt and manure around with a front-end loader? Or drill fence post holes with an auger? If so, it isn‚Äôt necessary to buy such a powerful tractor.

You pay more money for a machine that is larger, heavier, less maneuverable and possibly ill suited to your specific needs.

Enjoy the photo gallery from this year’s “Love My Tractor” photo contest.

The future of tractors for small-scale farming continues to trend toward lightweight, budget-friendly machines with an emphasis on maneuverability and expandability.

Subcompact and compact utility tractors might not be capable of operating the huge implements needed to farm thousands of acres. But with three-point hitches, hydraulics and PTOs, they accept an impressive variety of attachments and can handle almost any task in small amounts.

In short, don‚Äôt overbuy. You don‚Äôt need to go the opposite direction and purchase an underpowered machine. But it‚Äôs amazing how much subcompact and compact utility tractors can accomplish.

A smaller tractor can get into cramped spaces and is less likely to compact soil or generate ruts on soft ground. If you focus on finding the smallest tractor that will suit your needs, you can save money on the tractor itself.

You can invest those savings in attachments and implements for specific tasks you want to accomplish.

And that‚Äôs a good note to end on. With so many tractors and implements to choose from, it can be argued there‚Äôs never been a better time for small-scale farmers to shop for machinery.

Analyze your needs and conduct some research. Chances are you‚Äôll find a tractor with the perfect blend of size, strength and ability. And with the purchase of a new machine, you‚Äôll help write the next chapter in the history of American tractors.

This article originally appeared in the May/June 2020 issue of¬†Hobby Farms¬†magazine.