Hog Back Rubs & Impulse Ducks At 30 Acres And A Goat

Rosa Vasquez from the Virginia-based venture talks about how perseverance can produce moments of inspiration on the farm. 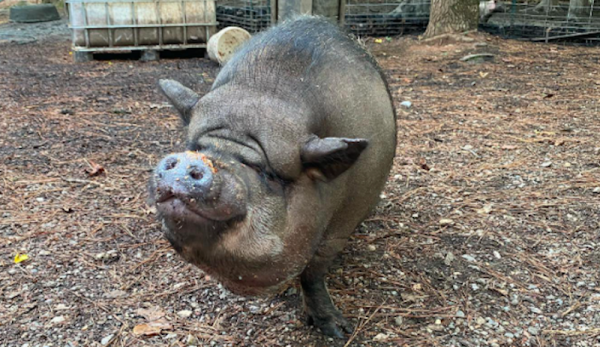 “Iâ€™m from Philadelphia and heâ€™s from Brooklyn so we were just winging it!” says Rosa Vasquez of the 30 Acres And A Goat Instagram account, looking back on her early days raising chicks alongside her boyfriend, Nick. “I started off with ones I thought were pretty, then realized that if I wanted eggs and meat I needed to do my homework.”

Vasquez’s homework paid offâ€”and now she documents her farming adventures in Mckenney, Virginia, to the world via social media. Alongside the homestead’s poultry, you’ll also find horses, hogs and bunnies in the mix.

We spoke to Vasquez about securing a 30-acre plot and the joys of Rhode Island Reds. We also touched on the way pigs love back rubs.

From Backyard Chickens to 30 Acres

Vasquez’s farming journey begins when she was living in Hampton, Virginia, and looked up the rules for keeping backyard chickens. After learning that they were permitted five chickensâ€”but no roostersâ€”her boyfriend constructed a coop from a repurposed curio cabinet.

“One day I went to get feed and they had ducks and I was like ooh, well, you canâ€™t just get one!” says Vasquez. “So I got two, [and] shortly after there was kind of this a-ha moment. My boyfriend and I realized that we wanted to do more, so we started looking for land.”

After originally searching for around 5 to 10 acres, Vasquez heard about a friend of a friend who was selling a house on a whopping 30 acres. “We never expected to live on 30 acres in the country,” she says, “but here we are.”

Read more: Ducks are great poultry for both meat and eggs!

“My Easter Eggers and Rhode Island Reds are egg laying machines, even through the winter,” says Vasquez when asked about the most productive members of her farm.

Pigs supplement the poultry at Vasquez’s venture. She characterizes them as “very loving” creatures with even the 500 pounders liking to eat out of her hands. Along with enjoying back rubs, Vasquez says “we make it a point to talk to them and give them individual attention as often as possible.”

Read more: Read about the when, where and how of pastured pigs.

Glancing back over her farming journey so far, Vasquez says that one of the most rewarding parts of the process has been “the togetherness and seeing our boys take care of the animals and knowing where our meat and eggs come from.”

Inspiration comes from perseverance too: “Starting from scratch and having to start over, failing then starting over and reaching successâ€”itâ€™s the best feeling in the world to know that youâ€™re living this life that you created and itâ€™s thriving.”