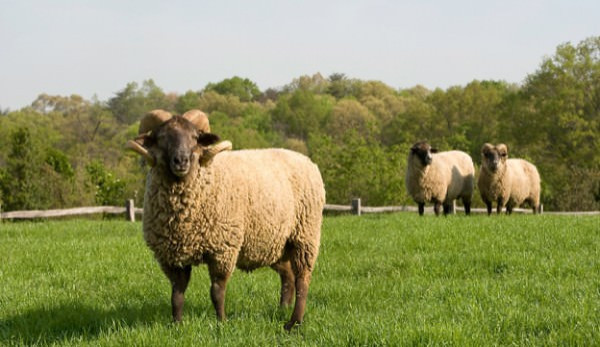 Use: Hog Island sheep furnish between 3 to 5 pounds of medium, short-stapled wool a year; itâ€™s said to spin easily and take dye well. However, most raisers keep these sheep in order to preserve this endangered heritage breed. The American Livestock Breeds Conservancy lists their status as critical, estimating a global population of less than 2,000.

History: The first settlers of Hog Island had to have been hardy souls to eke out a living on this remote, exposed barrier island off Virginiaâ€™s eastern shore. And that applies to the islandâ€™s sheep community, too. Descended from British stock and established during the 1700s, these sheep essentially fended for themselves, eventually evolving into a unique breed, compact and rugged. When an epidemic of hurricanes forced the human inhabitants to leave, many of the Hog Island sheep remained behind as truly feral animals â€“ one of the few populations of feral sheep in the U.S. They survived in this marshy environment until the Nature Conservancy bought the island in 1974 and sent them to live in more civilized surroundings, including historical monuments and museums like George Washingtonâ€™s birthplace, Mount Vernon Estate and George Masonâ€™s Gunston Hall.

Conformation: Thanks to their island environment, the Hog Island breed developed into a hardy, variable, compact sheep weighing between 90 and 150 pounds. Most flaunt white wool, which naturally sheds in the spring, although many raisers choose to shear for a neater look and to obtain more wool. They also come in black, and new lambs often arrive with spotted fleeces that generally fade with maturity. Their faces and legs may be black, or have varying amounts of speckles and spots in white, brown or black. Rams usually bear horns or small scurs, while the ewes can be either horned or polled.