When I told my animal friends that I didn't know what to blog about this week, Carlotta said, "Talk about me! Blog about wild pigs!" 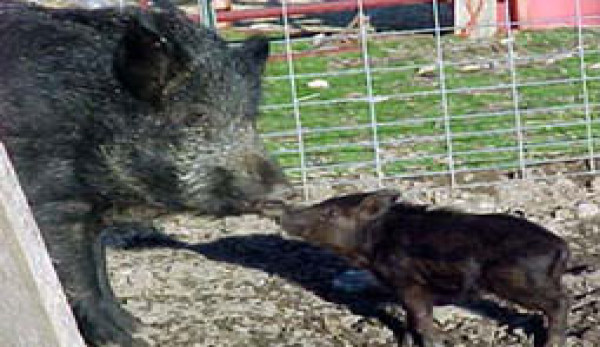 When I told my animal friends that I didn’t know what to blog about this week, Carlotta said, “Talk about me! Blog about wild pigs!”

Carlottaô isn’t a wild pig but she thinks she is because she grew up with Wilma, a born-in-the-wild Arkansas razorback. Wilma got separated from her sounder (that’s a herd of feral pigs) when she was a tiny piglet, but some nice people found her and bottle-raised her on goat milk.

Wilma came to live on our farm when she was 1 year old. She was lonely, so Mom and Dad bought Carlotta to keep her company. Carlotta’s dad was a Russian wild boar whose parents live at a zoo in Chicago. Her mom is an Ossabaw Island hog. Ossabaw Island hogs descend from pigs that Spanish explorers released on Ossabaw Island off the coast of Georgia almost 400 years ago. Now they’re tame, but they look like wild pigs.

One day Wilma and Carlottaô broke the fence and ran off into the woods. Mom walked in the woods, calling the pigs, for nearly a week. Then Carlotta came home. Wilma didn’t. There are lots of sounders of feral pigs in Arkansas, so Wilma probably met up and joined one. Now Carlotta lives with our horses.

According to a brochure written by the USDA, there are sounders of feral pigs in at least 39 states. The largest populations are in California, Florida, Hawaii and Texas. They go by lots of names, including wild hogs, wild boars, razorbacks and Pineywoods rooters. Most have a distinctive look.

Most feral pigs are medium-size, ranging from 75 to 450 pounds. Piglets are horizontally striped in shades of brown and cream. Adults can be gray, brown, white, russet or spotted, but most are black with lighter tips on their long, coarse hair. They have big shoulders and slim hips; long snouts like those of Ossabaw Island Hogs; small, pointed, erect ears; and longish tails that rarely curl like domestic pigs‘ tails. Both sexes have sturdy, sharp tusks, though a boarãs are much longer than a sowãs. They use their tusks for defense, so it’s never wise to approach feral pigs in the wild.

Unfortunately, feral pigs do a lot of damage on farms by feasting on and rooting up crops and sometimes killing and eating baby animals. And some wild pigs are carriers of two serious hog diseases that can spread to domestic pigs: swine brucellosis and pseudorabies. So feral pigs are considered a pest species, and in some states, hunters can kill as many as they want at any time.

But not Carlotta! When hunting season starts, Mom trims the long hair on her sides and uses livestock paint to spray “PET” on her in big, orange letters. We love Carlotta, we don’t want anyone to shoot her. Carlotta is our friend!