An entire field of veterinary medicine is devoted to holistic medicine. Here are the basics in the form of home remedies and ways to keep your flock healthy. 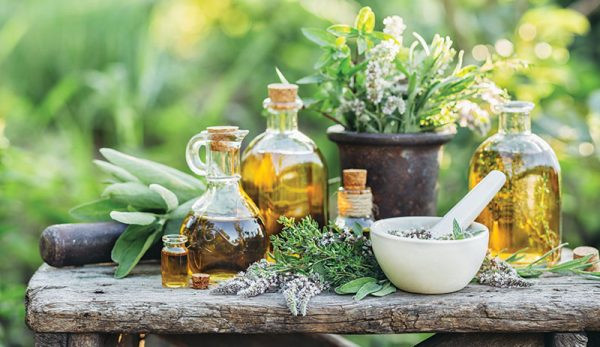 Holistic care is a form of healing that considers the entire organismâ€”body, mind, spirit and emotionsâ€”to give that organism the ultimate balance in life. If one of these parts has an imbalance, the overall health of the organism is negatively affected, allowing for disease.

In this case, the organism is a chicken, and you observe a clinical sign or symptom, such as diarrhea. A holistic approach offers several treatment options. This might include Western medications such as antibiotics or dewormers, but it also considers anything that causes stress.

Stressors would include the level of cleanliness of the environment, the amount of environmental enrichment available, dominance issues within the flock and diet. There is also the goal of avoiding substances such as chemicals. A movement exists to decrease antibiotic use in food animals including poultry, which has guided research on alternative treatment methods. By using effective natural substances, advocates hope, fewer medications and chemicals will be used in food animals.

Interestingly, the main driving force behind holistic care is to rectify the cause of the ailing and not simply to deal with the clinical signs. The lines dividing Western medicine from holistic care might be blurred because many chemicals have natural origins. Take aspirin, for example. The acetylsalicylic acid is found naturally in plants. So, is aspirin a chemical or is it naturally occurring?

An entire field of veterinary medicine is devoted to holistic medicine, which is beyond the scope of this article. Instead, we will discuss holistic care in the form of home remedies and ways that the backyard chicken-keeper can keep their flock healthy. This is meant to serve as an introduction to holistic poultry care and is in no way advocating, condoning or recommending its use.

Furthermore, the U.S. Food and Drug Administration doesnâ€™t regulate many holistic remedies. In fact, the organization is actively attempting to enforce regulations on some homeopathic remedies, a branch of holistic medicine, because of false and unproven claims by companies.

You take the entire organism into account when you consider your flockâ€™s environment. You can take several simple steps to work toward the goal of not allowing disease into your flock in the first place.

Focus on simple things such as fencing and reducing feed spillage. You would be surprised how effective these simple steps can be in reducing disease spread.

Quarantine new birds for 30 days before letting them into your flock. This can be difficult because you essentially need to have double the number of coops as well as more feeding and watering equipment. Also, donâ€™t allow wild-life near your flock. Reduce habitat outside the coop that wildlife utilize or hang reflective, mirror-like CDs by twine to scare off wild birds.

Diatomaceous earth kills external parasitesâ€”those that live outside the body on the skin. DE is thought to decrease the number of internal parasites as well, as it absorbs insectsâ€™ waxy outer cuticle, damaging it and ultimately causing the death of the insect.

To use DE, mix it with play sand in a 1-to-4 ratio (DE-to-sand). Make sure not to spread this DE mixture on the bare ground, because it wonâ€™t be very effective. Another ineffective means of using DE is by spreading it over bedding such as straw or pine shavings.

The best way to use DE is in a separate container such as a cat litter box (for bantams) or a kiddie pool (for larger birds). Keep in mind that DE has a very small particle size and can cause irritation for humans who dispense it. Wear a suitable mask that blocks tiny particles while working with DE.

No Need for ACV

Apple cider vinegar is useful for marinating a chicken prior to eating it. Other than that, itâ€™s not recommended for most treatments in poultry. Some people swear by ACV for curing most things, but the evidence is simply not there.

A few chicken keepers even promote mixing ACV with water and spraying it on a bullied bird to stop pecking issues. The idea is that the aggressive bird will not enjoy the taste of the ACV and leave the victim alone. However, no evidence supports this, and it isnâ€™t recommended.

A better method to address bullying is to identify conflicts within the pecking order and decrease areas of limited resources, such as food or water. For example, if bullying is encountered when a small amount of feed is offered, a dominant bird might peck at a subordinate bird in an effort to protect the food.

A simple solution is to add more feeders.

Herbal remedies have been around for a long time and are making a comeback because many antibiotics arenâ€™t allowed for poultry. Even though you might consider these chickens your pets, they are in fact food animals, and the laws regulating food animals apply to your feathered friends.

A lot of anecdotal information exists on the internet (based on personal accounts but not on facts), but you must ask yourself whether such claims have been proven to be true. Various studies have shown that some herbal remedies might work, some might be effective and others are useless.

Chickens commonly get worms. Many types of worms exist, as do eradication methods. Some herbal treatments, such as cayenne pepper and black walnut tincture, donâ€™t work against any type of worms. On the other hand, garlic contains an active ingredient that has some antibacterial and antiparasitic properties. However, it was found to be ineffective in decreasing worm burdens when fed to chickens.

Oregano has a few chemotypes, which are components of the main plant that are different chemically and sometimes functionally. The chemotypes in oregano contain molecules that have been shown to have antimicrobial properties.

Dry whey is a product of the cheese industry. Chickens donâ€™t contain the enzyme that digests the milk sugar called lactose in their digestive tract. However, dry whey has been shown to act as a prebiotic (a food source for the beneficial bacteria in a chickenâ€™s cecum).

Specifically, prebiotics give nourishment to the good bacteria in the digestive tract. This is in contrast to probiotics, which are beneficial live bacteria that exist in the gut of poultry. Probiotics can be added to the diet to help improve general health associated with the gastrointestinal tract.

We aimed to provide you with some clarification on what holistic poultry care is and to offer some alternative treatments. Itâ€™s important to recognize that quite a bit of room remains for research proving the effectiveness of many holistic remedies. One should keep an open mind when considering new remedies, but one must also critically look at the evidence behind any such remedies in order to make sure they are effective.

Evan Adler, D.V.M, and Maurice Pitesky, D.V.M., are staff and faculty at the UC Davis School of Veterinary Medicine-Cooperative Extension.