One of the largest sized and producing dairy breeds, the black and white Holsteins to many are the quintessential dairy cow. 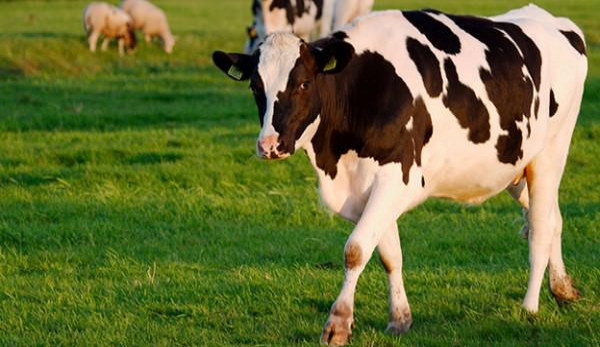 Use: Holsteins are one of the largest dairy breeds; they’re large not only in size but in milk production. The average Holstein in a commercial dairy produces 24,000 pounds of milk per year with 2.5 to 3 percent butterfatâ€”that’s about 10 gallons of milk per day. Of the over 9 million cows regularly milked in the United States, about 90 percent are Holsteins.

History: Holsteins, to most Americans, are the quintessential dairy cow. From advertising to country kitsch decorating, these large, black-and-white cows symbolize country life. The breed, which originated in the Netherlands and was first imported to the United States in the mid-19th century, is also recognized in a rare red-and-white variety.

Conformation: Holsteins are the largest of the dairy breeds, with a mature cow weighing around 1,500 pounds and standing almost six feet tall at her withers.

Special Considerations/Notes: Holstein heifers can be bred at 13 months of age, when they weigh about 800 pounds–but it’s desireable that Holstein females calve for the first time between 23 and 26 months of age. Holstein gestation is approximately nine months.While some cows may live considerably longer, the average productive life of a Holstein is 3 to 4 years. The breedâ€™s current popularity is derived from the cowâ€™s production capability and the fact that she stands up reasonably well to the confinement system used in large-scale, industrial dairies.