We have two new goats at our house and, boy, are they tiny! They came to live with us because someone threw them away. Can you believe it?! 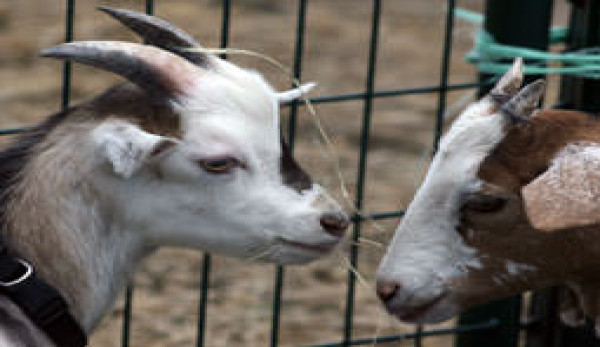 We have two new goats at our house and, boy, are they tiny! They came to live with us because someone threw them away. Can you believe it?!

A few nights ago Susie Price, a lady Mom met at the Homesteading Today goat forum, noticed a commotion out in her field. Her bigÂ Nubian does were beating up two very small goats. (We goats don’t like un-introduced newcomersâ€”not at all!) Someone had dumped the goats in her field. Susie knew they were dumped because for the goats to be where they were, whoever left them had to climb several fences carrying the goats. And no one for miles around raises miniature goats.

Susie owns Ages Ago Acres farm in Alton, Mo., and some of the very best Nubians anywhere. She keeps a closed herd, which means she only brings in new genetics via artificial insemination, to protect her goats from disease. So she was mightily dismayed and posted to Mom’sÂ notyourusualgoatlist Yahoo! GroupÂ that she had to find them a home right away or she’d have to put them down.

Of course, our Mom is a softie, and she said we would take them. The bad thing is that we just got our winter hay, andÂ hay is stored in every nook and cranny on our farm so we really didn’t have a pen to quarantine them or a place to put them after that.Â

So Mom got up early the next morning and spent four hours building a nice pen for the new goats. Picture this: It’s 101 degrees F, and Mom is poundingÂ fencing into totally parched, hard-as-rock earth. Some of the things she said while she did it weren’t very nice, but she got them in. Then she pilfered some mesh gates here and there and borrowed one of the big plastic dog houses that Milo,Â Esme and Jimmy weren’t using anyway (they have a big, wooden dog house that they greatly prefer), so we were good to go.

Off Mom and Dad went to pick up the goats and meet Susie and her beautiful goats in person. Mom was enchanted, especially with an all-black Nubian doe named Ages Ago Ruby Gloom. Mom says she has enormous, bell-shaped ears and cool, creepy yellow eyes. I would like to meet that girl!

And Mom and Dad got the little goats. The boy is aÂ Nigerian Dwarf that Mom named Morag. The girl is a Miniature Nubian that she named Spike. They’re teensy! The boy is tame, but the girl is scared. No wonder, being dumped by themselves like that! They were wearing collars so they must have been someone’s pets.

It’s very, very dry here in the Ozarks, and hay is scarce and very expensive. Mom thinks whoever dropped Morag and Spike off at Susie’s probably thought they couldn’t afford to keep them and since Susie has lots of sleek, fat goats, she would take them in. The little goats’ former owner didn’t realize the big goats might have killed Spike and Morag or that Susie couldn’t keep them because of her closed herd.

If you can’t keep an animal due to the drought, don’t despair, try to find it a good home. Put up flyers, place an ad at Craigslist, post to the Hobby Farms forum. You’d be surprised how many soft-headedâ€”oops, soft-heartedâ€”people like my Mom are around. You just have to find one. If they know you love your animal but can’t keep it, they will help if they possibly can.