Making A Living Through Homesteading Workshops

In West London, Sara Ward turned her homesteading hobbies into a career teaching in-home workshops, an example of profitable passion others can follow. 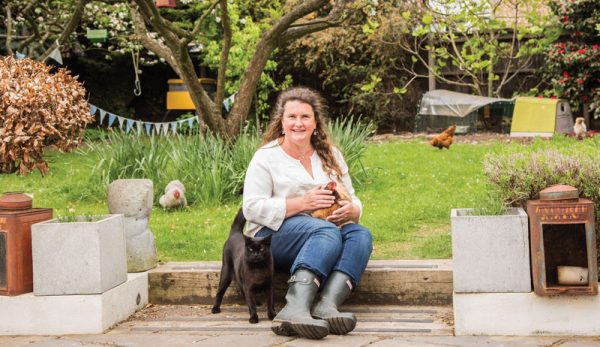 Hidden at the end of a line of townhouses, Sara Ward and her family have transformed their house into an urban smallholding dubbed ŌĆ£Hen Corner.ŌĆØ They are living the country life complete with 24 hens, 100,000 honeybees, a vegetable garden, fruit trees and micro-bakeryŌĆöall on a small city lot.

Ward and her husband, Andy, welcomed me into their home on a stereotypical drizzly England day. As we sat in their conservatory, where weekly homesteading workshops are held, they offered me Earl Grey tea and homemade fresh-out-of-the-oven cinnamon buns.

Their homesteading journey began more than a decade ago when they started questioning where their familyŌĆÖs food was coming from. After a bit of research, they started buying organic, because growing your own vegetables is not always easy.

ŌĆ£IŌĆÖve never been able to grow a carrot that has been big enough to be peeled,ŌĆØ Ward says. ŌĆ£But weŌĆÖve worked out what we can grow and what we canŌĆÖt.ŌĆØ

As they started homesteading, others became interested. Then a chicken coop company asked them to run a few poultry courses.

Those workshops slowly ballooned WardŌĆÖs hobby into a full-time business, where she was able to quit her job and start to homestead full time. In addition to offering classes, Ward is a regular columnist for Country Living MagazineŌĆöone of the U.K.ŌĆÖs most popular lifestyle magazines.

ŌĆ£Because we are doing it in London, we show people what can be done in a city,ŌĆØ Ward says. ŌĆ£A majority of people live in towns, but there is a big aspiration for country life. Lots of television programs and magazines talk about how wonderful the country is.

ŌĆ£Initially, we advertised through the company who made the chicken coop. They ran a program of courses for chicken owners to showcase how easy it is to care for themŌĆöparticularly in London where people think, ŌĆśI canŌĆÖt raise chickens.ŌĆÖŌĆØ

Ward gets her guests to celebrate their urban homes while weaving in parts of the countryside. Her husband says that many are learning how people are part of the planet’s problems. They want to mitigate their carbon footprint and make wiser food choices, but they need practical advice.

Ward is schooling people to do just that through her many workshops.

Hen Corner offers workshops in the evenings during the week, and up to a half dozen guests typically attended. Ward starts in the garden, offering a freshly made cold drink.

She then serves mayonnaise made from her chickenŌĆÖs eggs on bread that she baked. This allows her to talk about her weekly bakery, which she follows by discussing the details of chicken keeping.

At the end of the tourŌĆöand after everyone has gotten a chance to ŌĆśhug a henŌĆÖŌĆöthe workshop retreats in the conservatory, where guests are treated once again to WardŌĆÖs kitchen skills.

Ward sold me on the idea of offering chicken workshops from my homestead by putting it this way: ŌĆ£The people were fascinated. They met the chickens (and) had tea and cake, and I showed them how to muck out the chickens. And I got paid for doing it.ŌĆØ

In the beginning, Ward worked a day job. When she wanted to go full time, her husband encouraged her to create a proper business plan, as he wasnŌĆÖt quite sure that workshops would be able to contribute enough to the mortgage.

ŌĆ£It was actually quite good,ŌĆØ Ward says. ŌĆ£It helped me see what my competitors where, what my strengths were, what I needed to earn and how I could do that.

“Rather than running around and doing whatever I could possibly do, it showed me what I needed to do. The first year we spent a great amount of time planning. We redid the kitchen to get ready for courses, but we wanted a new kitchen anyway.ŌĆØ

By the end of the first year, Ward was financially independent. She never borrowed money and is now earning more than she did from her traditional job. She expanded her workshop repertoire by offering things she was going to do anyways such as making chutney, marmalades and apple wine, as well as caring for bees.

Her main income is from courses and private bookings. This includes school groups, where she teaches 1,500 students a year. Each student receives hands-on skills.

As I tried to translate WardŌĆÖs success into something that I could do at my home, I asked her what she thought about strangers coming to her home.

ŌĆ£This room, the conservatory, connects to the kitchen and bathroom,ŌĆØ Ward says. ŌĆ£We welcome them through the house, but they donŌĆÖt go in the house.

“I initially thought a weakness was that it was my home, because they could go to a large farm or cooking school. The feedback that IŌĆÖve had is that people go to the cookery schools and say ŌĆśWell it was nice, but we were working in teams, and we didnŌĆÖt have the beginning-to-end hands-on product.ŌĆÖ

ŌĆ£We turned our weakness into our strength. We tell them ŌĆśThis is us, and this is how we live. If you can do it with me in my home, you can do it at your home.ŌĆÖŌĆØ

After Ward attended a baking class with her friend, they planned to meet up once a month to keep their baking skills honed. The idea was to share each otherŌĆÖs loaves and for the leftovers to be sold to friends on social media.

Ward created a posting inviting anyone who was interested to come over on Friday from 5 to 7 p.m. With markets usually in the early mornings, Ward didnŌĆÖt know if Friday nights were going to be profitable.

On the first day, 30 people showed up and paid ┬Ż380 (~$466 U.S.). With those net sales, she and her friend changed their monthly meetings to weekly. Since then, they’ve since offered fresh bread every Friday.

Early in the week, Ward asks for prepaid orders via her Facebook group. On Thursday, she starts the kneading and measuring process.

If someone orders one loaf of specialty bread, she usually makes a couple more to fill the baking sheet. (The investment for making bread is in the prep and not cooking time.) On Friday at lunch, sheŌĆÖll send out a message regarding the spares she has to offer.

ŌĆ£We will then sell as much in spares as we had preorders,ŌĆØ Ward says. ŌĆ£If spares occur after the sale, they go in the freezer and are used for courses to feed the participants.

ŌĆ£People buy a bagel, see the chickens running around. Kids can swing in the hammock. If they are having to queue, they can have a cold drink, see what we are about and then that usually turns into them buying a course.ŌĆØ

Having someone commit to spending ┬Ż95 (~$116) to go to an outsiderŌĆÖs home can be difficult. But if they have already spent ┬Ż1 (~$1.23) on a bagel, they feel more comfortable, Ward says. Jars of preserves, fresh eggs from the chickens and honey from the bees are also available.

When I returned from my visit, I wanted to mimic many of WardŌĆÖs workshop ideas.

After sprucing up my detached pool house, I started offering make-and-take terrarium classes and introductions to chicken-keeping and animal training (chicken agility!). I partnered with the local feed-supply store to help advertise it and posted the events on my Facebook page. I also advertised on free websites and listservs for my area and created a TripAdvisor account.

IŌĆÖve been offering workshops for a year and have had two to 12 attendees for each one.

Like Ward, I offer my courses Monday through Friday. Because I also work full time, I only offer my courses in the evenings. Each of my workshops is presented once a month, and I rotate the days to accommodate schedules.

My homeownerŌĆÖs insurance would not cover people paying to be on my property for an event, so I purchased some additional business insurance, which is $500 for a year. Because I am within the city limits, I must also pay a business tax of $125 a year.

If you are going to sell or offer chicken eggs, consult with your city and state regulations. Regulations regarding the selling of baked goods are usually more lenient.

I found Hen Corner on TripAdvisor as being listed as one of the best parts of London, and IŌĆÖm not alone.

ŌĆ£People have driven four to five hours for a course,ŌĆØ Ward says. ŌĆ£They have stayed in a hotel the night before and explored London. People come from [as far away as] New York and Florida.ŌĆØ

While I just started my homesteading workshops, IŌĆÖve encountered a similar phenomenon. IŌĆÖve had people drive two hours to attend my two-hour terrarium and chicken classes, which end at 8:30 p.m. on a weekday! People want to learn about homesteading. And they want to get hands-on experience.

The maximum number of people you accept for a workshop will depend on your space. I asked Ward if she ever cancels a class due to low registration.

ŌĆ£WeŌĆÖve never canceled, because you never know why they booked it or how much it means to them,ŌĆØ she says. ŌĆ£Earlier this year, I did a pasta course, and one person booked it. I thought I could be doing other things that day.

“But then I thought that itŌĆÖs ┬Ż95 (~$116) that I wouldnŌĆÖt have had and if this person wants to hang out with me, I am going to make a new friend. If it is only one person, it is so much less work and so much more relaxed. Then I switched my mindset to ŌĆśthis is really awesome.ŌĆÖŌĆØ

The woman who attended was grateful, according to Ward. It was the attendeeŌĆÖs third ŌĆ£homesteadingŌĆØ course that she had booked (but first with Ward). The other two bookings had canceled due to low registration.

In the end, she received a private pasta-making class, while Ward got paid and her businesses reputation went untarnished.

ŌĆ£Empowering people is our goal,ŌĆØ Ward says. ŌĆ£IŌĆÖve met the most amazing people. When we have kids come around here, we have them plant a seed and take it home. I say ŌĆśYou are farmers. You are producing food. If you can look after herb seeds, that is the beginning of growing your own food and feeding yourself.ŌĆÖŌĆØ

Sidebar: Start Your Own

If you are interested in offering your own homesteading workshops, consider including these value-added commodities.

This story originally appeared in the November/December 2019 issue of┬ĀChickens┬Āmagazine.