While honey harvests will continue in existing hives this year despite drought, new hives and next year’s harvest could be at risk. 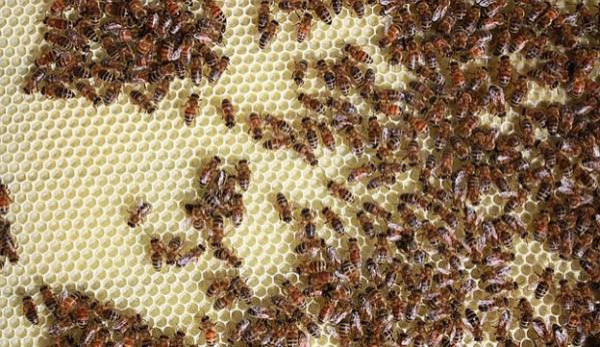 As July sizzles into August with continued hot, dry conditions, some beekeepers are finding an abundance of honey. Opposite what one might think—at least in some areas—nectar flow has kept Honey bees hard at work.

“In some states, bees and plants need moisture to make honey,” explained Dave Shenefield, owner of Clover Blossom Honey in northern Indiana. “But in our part of Indiana, generally a drought will give you the biggest crop.”

Shenefield explained that this year’s weather conditions are similar to 1988, when his honey harvest was plentiful. However, 1989 was among his worst honey years—plants simply weren’t as productive in the year following the drought.

Conditions state to state and even within states vary as beekeepers compare the productivity of their hives. For example, Janet Hart, central regional director of the Illinois Beekeepers Association, knows the dry conditions are more extreme in the southern part of Illinois than the rest of the state.

“From what I understand, bees are working some varieties of soybeans and red clover,” Hart says. “In our area, red clover is not something bees typically work; the flower is too deep for the bee’s proboscis. I’ve heard that bees are working the red clover this year because the nectar tube has been shortened by the drought conditions.”

In contrast, in southern Indiana, where beekeeper Paul Hill runs about 700 hives, spring came early. In a typical year, Hill builds his hives up rapidly by feeding them pollen. Providing pollen encourages the queen to lay eggs, inspiring rapid population growth. The nectar season is shorter than in northern parts of the state so plenty of bees are needed to make honey. Hill typically feeds his Honey bees pollen and sugar syrup while snow is still on the ground.

Hill’s bees produced honey well in June, but as conditions became dryer, production slowed. In southern Indiana, the bees have also harvested nectar from soybeans—something generally unheard of. As a result of the dry conditions, Hill will resort to feeding his bees sugar syrup in September with hopes of each hive having enough stores to survive the winter months.

While Shenefield knows beekeepers who have already stopped harvesting honey from their hives this season, he’s continued to take advantage of his bees productivity while continuing to watch the hives closely; he’s seen hives that quit making honey too early and end up starving in September.

When the nectar flow dries up, the bees will be forced to begin consuming their own stored harvest—perhaps earlier than normal.

“The most crucial time is yet to come,” Shenefield explains. “Fall is when the queen starts raising her winter bees—the ones that will keep her alive. If there is nothing coming in, the queen can’t raise winter bees to get her through.”

Shenefield suggests that beekeepers stay vigilant to honey production and their bees’ activities. If they appear to be slowing or haven’t produced enough honey, it will be necessary to feed them. This could require bucket-feeding bees with their own honey or providing them with sugar syrup so the queen continues to produce her winter bees.

Indiana’s chief apiary inspector, Kathleen Prough, worries that the most vulnerable hives are those started this year. Newer hives are at risk, particularly if the bees have had to draw out comb and collect pollen and nectar, all while the queen began building the population.

According to Prough, beekeepers with young hives won’t have a honey harvest because of the drought and will have to feed their hives to help them build a store to live on during the coldest of the winter months. She adds that hives started after July 4 this year will need to be given extra care; beekeepers should be prepared to pamper these hives through the fall with extra feed.

Shenefield advocates keeping more than one hive. A pair of hives offers a beekeeper a way to compare how the bees in each are doing. Plus, a brood box frame, filled with honey, can be harvested from one hive and shared with the other.

As much as bees need food supplies, it’s also important they have access to water to keep the hive’s interior cool. Hart cautions beekeepers to be aware of where their bees might be getting water.

“You don’t want them collecting water from a neighbor’s swimming pool,” she says. “And they may be collecting more water than usual to stay cool.”

Hart suggests providing water sources for bees by placing a piece of wood under a nearby faucet and letting it drip. The bees will take the water from there because it’s the nearest source.

Hart also says hives in full sun should be provided with makeshift shade so the bees won’t have to work as hard to cool the hive. As much as the bees will need plenty of winter honey stores, they also need water and shade to survive these extreme conditions.