Though "natural" is always a good goal, expect to help honeybees through the winter with supplemental feedings to sustain conditions not found in nature. 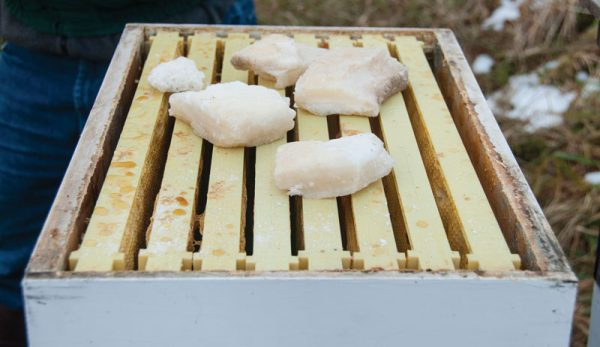 Winter is often a real nail-biter for beekeepers. We may think our honeybees have plenty of stores to get through the cold winter months, but then we sustain colony losses anyway. Fortunately, from sugar syrup and fondant to candy boards and beyond, you can offer some important extras to help your most vulnerable colonies make it through.¬†

Based in South Carolina, Charlotte Anderson is a master beekeeper and the owner of Carolina Honeybees. For Anderson, simply leaving honeybees to fend for themselves is a nonstarter.

But, she maintains that‚Äôs simply poor animal husbandry. ‚ÄúI have miniature donkeys,‚ÄĚ Anderson says. ‚ÄúIf we have drought and there‚Äôs not much grass in the pasture, I‚Äôm going to buy hay. I‚Äôm not going to just let my donkeys die because of weather conditions. And, when we keep honeybees‚ÄĒhonestly, no matter how we try to keep them as naturally as possible‚ÄĒit‚Äôs not a natural environment.‚ÄĚ

Not only do we install bee packages in man-made hives, but we often cluster multiple hives close to one another‚ÄĒsomething you‚Äôd be hard-pressed to find in nature. With such increased competition for limited forage, it falls to beekeepers to ensure that their bees have enough to eat.

Of course, that‚Äôs not to say you should have to feed each of your hives every year in perpetuity. ‚ÄúThe beekeeper should only have to step in when, for some reason, the bees are short of resources,‚ÄĚ Anderson says.

There are many reasons why a colony might end up light on stores. Aside from putting too many hives in one place, times of drought can limit the available forage. ‚ÄúThe bees might not be working at their peak efficiency, because of pests or disease, which we, as beekeepers, should hopefully have seen and handled earlier in the summer,‚ÄĚ Anderson says.

An ill-timed swarm can also spell trouble. If a colony of honeybees splits late in the season, the reduced mother colony‚ÄĒleft behind with fewer stores and half its original workforce‚ÄĒmay struggle to survive the winter.

A hive in such a weakened state likely will need supplemental food.¬†

Just how much honeybees need to make it through winter partly depends on your location. Beekeepers in relatively mild climates may be able to skate by with a minimum of 60 pounds of honey stores per hive. But those living in spots with very cold temperatures may need 90 pounds or more per hive.

If you aren‚Äôt sure what‚Äôs typical for your neck of the woods, check with your state beekeepers‚Äô association or local extension agency.

The type of bees you have is another influencing factor. ‚ÄúThe different races of bees as a group tend to overwinter with a larger family or a smaller family of population,‚ÄĚ Anderson says.

‚ÄúLike Italians tend to overwinter with a pretty large group of bees. That‚Äôs a good thing as far as there being a lot of bees in there to help keep each other warm if we have really cold weather. But it‚Äôs a bad thing if they don‚Äôt have enough food stored to keep everybody‚Äôs belly full until spring.‚ÄĚ

Rather than feeding your honeybees in winter, it‚Äôs best to feed them for winter instead. Ideally, if you reserved extra frames of their honey, now is the time to give those back to your bees. But if you can‚Äôt provide them with their own honey, you can do a few next-best things.

For instance, before your honeybees cluster together for winter, give them a boost by feeding them a 2:1-part sugar solution. ‚ÄúIt‚Äôs a thick syrup that the bees tend to store well,‚ÄĚ Anderson says. ‚ÄúAnd they don‚Äôt have to work quite so hard to get all the moisture out of it, as they convert it into honey for winter stores.‚ÄĚ

Still, unless you live somewhere warm, you shouldn‚Äôt try to rely on syrup to feed honeybees throughout the winter.

‚ÄúThe bees can‚Äôt leave the cluster to go get it, if it‚Äôs [in a front feeder] outside,‚ÄĚ Anderson says. ‚ÄúAnd, if you have it [placed] internally and they can get to it, it increases the amount of moisture inside the hive. The bees will have to work a good bit to try to convert that very high water-content syrup down‚ÄĒeven at two-to-one.‚ÄĚ

Feeding a more solid food source to your bees during cold weather can help to mitigate these issues. Bees have been shown to respond particularly well to hard honey candies, as well as thick creamed honey, too.¬†

Reporting their findings in a 2017 article appearing in the Journal of Entomological and Acarological Research, researchers tested honeybee responses to a variety of supplemental food sources. Under laboratory conditions, they gave bees sugar syrup, liquid honey, honey candies and assorted honey jellies to determine which food type, if any, would affect the bees‚Äô ability to survive cold temperatures.

In their work, “Effects of Various Sugar Feeding Choices on Survival and Tolerance of Honeybee Workers to Low Temperatures,”¬†the authors note, ‚ÄúThe mean time at which 50% of bees were able to survive ranged from three days (unfed bees) to 15.8 days (honey candy group).

‚ÄúCreamed honey, sugar syrup and honey candy showed the highest ability to improve the tolerance of honeybees to cold air temperatures. During cold periods providing bee colonies with honey candy or creamed honey can be considered as [a] suitable energy source to boost the survival of bee colonies.‚ÄĚ

For her part, Anderson says, ‚ÄúIf you pop the top on your hive in October, and, ‚ÄėOh my, your bees are nowhere near [ready] for winter,‚Äô then a candy board, a sugar cake or a winter patty‚ÄĒ¬†something like that‚ÄĒis your best bet.‚ÄĚ

Suitable for emergency feeding, winter patties are a mix of carbohydrates and proteins available from beekeeping suppliers. They may contain sugar or high fructose corn syrup, as well as other supplements. ‚ÄúAnd they may have a little bit of protein in there, but it‚Äôs not just a big old pollen patty like we think of a protein patty,‚ÄĚ Anderson says.

As for sugar cakes and candy boards, their ingredients are simple enough that many beekeepers make these at home. ‚ÄúYou can mix pure cane sugar with just enough water for it to clump together,‚ÄĚ she says.

Sugar cakes, candy boards and winter patties all work on a similar principle. ‚ÄúBasically, we‚Äôre putting a slab of carbohydrates right on top of the cluster of bees,‚ÄĚ Anderson says. ‚ÄúSo, as the bees come up through the boxes and they eat all of their honey stores, when they get to the top‚ÄĒwhere they would be out of food‚ÄĒright there laying on the top of their heads is that [sugar source.] And, while that‚Äôs not as good as having their own honey and their own frames where they put it, it can make the difference between life and death.‚ÄĚ

One of the easiest ways to deliver these supplemental sugars is with a hive shim. ‚ÄúIt looks like a honey super that‚Äôs about 2 inches tall, and it allows you to close the hive up,‚ÄĚ Anderson says.¬†

And if things look dire? ‚ÄúSome people [use] the ‚Äėmountain camp‚Äô method,‚ÄĚ she says. ‚ÄúYou lay a [single sheet of] newspaper over the top [of the frames in] the uppermost box. And I usually spray it with sugar water just to wet it down. Then you pour dry cane sugar on top of the hive there about an inch or so deep. You kind of spread it out and then put your box back together.‚ÄĚ

The warmth and moisture from within the cluster rises and are partially absorbed by the newsprint. If the bees deplete their own food stores, they can easily chew through the moistened newsprint to access the clumps of raw sugar sitting on top of it.

You may notice the occasional warm day toward the end of winter and in very early spring, but that doesn‚Äôt mean your bees are out of the woods just yet. ‚ÄúMost bees in our area here in South Carolina starve to death in March,‚ÄĚ Anderson says. ‚ÄúBeekeepers get them through the coldest part of the year, and it starts to warm up and they think, ‚ÄėAh! We made it! There are some warm days. We‚Äôre OK!‚Äô But inside the colony, those bees are trying to ramp up brood production.‚ÄĚ

This article originally appeared in the November/December 2022 issue of¬†Hobby Farms¬†magazine.