Ever wonder what happens when something goes wrong with the delicate structures inside a hoof? Read on to learn about the devastating condition called laminitis. 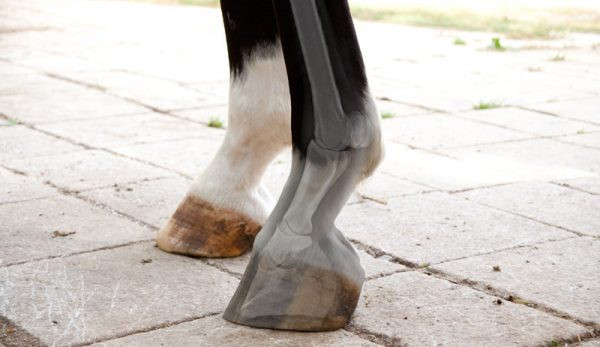 Welcome to part two of a three-part series where we walk a mile in our livestock’s shoes, er, feet. Last month, we discussed normal hoof anatomy. This month we begin to look at what can go wrong inside the compact and complicated world of the hoof.

Let’s start with a condition called laminitis, often known as founder. Next month, we’ll peek at a few other common hoof maladies.

The Lowdown on Laminitis

Last month we learned there is a bone suspended inside the hoof capsule by a Velcro-like structure called laminae. These laminae are composed of numerous tiny, delicate blood vessels that nourish and support the bone inside the hoof.

When the laminae become damaged, that’s known as laminitis. And this is bad news. Here’s how this can happen.

There are three basic types of laminitis: inflammatory, metabolic and mechanical overload. Grain overload is the classic scenario of an inflammatory cause of laminitis. In cases where an animal gorges on grain (like a horse or cow breaking into the feed room), the rapid increase of highly fermentable carbohydrates wreaks havoc on a digestive system unaccustomed to it.

This sudden imbalance can damage the colon, release toxins, and cause a series of inflammatory chemicals to release.

Grazing on large amounts of lush, spring grass can also result in this type of laminitis.

You may also see this same type of laminitis in animals very sick in other ways, such as with severe pneumonia or other infectious causes that teeter on sepsis.

Laminitis is always a worry with very sick hooved animals because of this reason.

Inflammatory laminitis typically shows up acutely and severely. It can lead to euthanasia, overshadowing the underlying disease that got the animal sick in the first place.

This is one reason laminitis can be a devastating, heartbreaking condition.

Metabolic laminitis is due to the animal’s inability to appropriately manage insulin. This is equine-specific, and a few related conditions can gang up on an animal such as Cushing’s disease, insulin resistance, and yes, a condition called “metabolic syndrome.”

If not managed appropriately through weight control, dietary restrictions and exercise, these conditions can lead to a chronic, slower form of laminitis, which can still ultimately be debilitating.

Mechanical overload is the third cause of laminitis. This is most typically seen when an animal is stalled with a leg injury and compensates by placing too much weight on the opposite leg. We also refer to this as “supporting limb laminitis.”

This may sound familiar to those who follow Thoroughbred racing. Kentucky Derby winner Barbaro was euthanized due to supporting limb laminitis while recovering from a serious injury in the opposite leg.

What to Look For

The classic clinical sign of a foundering animal is one who stands back on his heels. The laminae becomes damaged and dies, causing the hoof, frequently starting with the toe, to loosen from the hoof wall and start to rotate downward.

As you might imagine, this causes incredible pain, and the animal tries to alleviate pressure in the toes. When forced to walk, an acutely laminitic animal will show reluctance and appear to “walk on eggshells.”

You know how painful it is to rip a fingernail off at the nail bed? Imagine having to stand on that nail bed. And that’s likely only a fraction of what laminitis feels like.

And just like an injured finger, acute laminitic hooves are hot to the touch and have a throbbing pulse.

Prevention Is the Best Treatment

However, the more rotation of the bone, the more difficult it is to make the animal comfortable. Severe cases of laminitis usually end up as humane euthanasia due to animal welfare concerns.

So how to you make sure those sensitive laminae are kept calm and happy? Keep your animals on a balanced diet appropriate for their age, breed, species and activity level. Also keep grain locked up in a secure location.

If you have a breed of horse or pony (donkeys too!) that is an “easy keeper,” overweight, has Cushing’s or Equine Metabolic Syndrome, work closely with your vet to ensure their weight is under control and they are fed an appropriate diet.

Yes, laminitis can be devastating. But most of the time, it can also be prevented.