Horse and Donkey: An Unlikely Friendship

I had no use in my life for a miniature donkey … until I met this one. 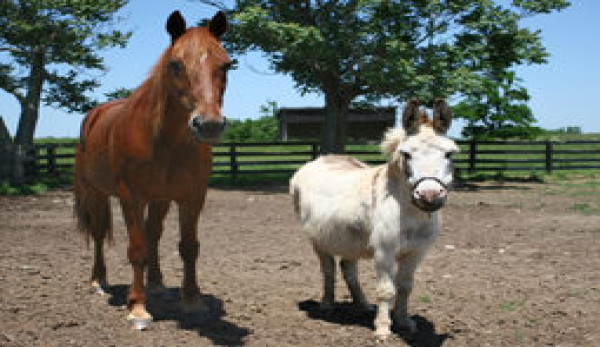 “Stubborn as a mule” was all I could think. Except he wasn’t a mule—he was a miniature donkey. It was 9:30 on a Monday night in November when we met. My horse, Red, came up lame that day, and I needed to keep him in the barn overnight. All the horses at this farm lived happily outside in huge pastures, but I couldn’t keep Red in the barn overnight without a buddy or he’d tear the place down.

The farm owner suggested I bring in Razz, her miniature donkey, to keep him company. Razz’s round belly suggested a night off of the pasture would do him good, and I thought it couldn’t be all that hard to convince a donkey to come to a total stranger.

It took me more than a half hour to catch this donkey in the pasture: He’d go right, I’d go right. He’d go left, I’d go left. He’d stop, I’d stop. Then I’d take a step, and he’d start walking again. He was just walking, but what he lacked in speed, he made up for in strategy. When I finally wrangled him, he wasn’t any more willing to cooperate—the trek from the far corner of the field to the barn took several more minutes. I bedded the stalls for Red and Razz and wished them goodnight. From that night on, they were the best of friends.

It turned out Red bowed a tendon and needed months in a small paddock while his leg healed. Razz and I mutually ignored each other in the paddock each day until he caught on to my regular routine with Red, which included five to 10 minutes of grooming.

Razz soon decided to rethink the misgivings of our first encounter and stood patiently (or not so patiently) behind me to wait his turn for a scratch. As I curried Red’s belly, Razz would put his face against my back—a gentle reminder that there was more than one creature in that field who needed loving. I think Razz came to see this attention as his reward for being Red’s new constant companion, and I was happy to pay it.

When I brought Red into the barn for whatever reason, Razz would let off his he-haw alarm system, which the farm residents must have loved during my 6:30 a.m. visits.

Red and Razz lived in their small paddock until May, when Red was sound enough to turn out in the geldings’ pasture. I was fascinated to watch how Red protected Razz from the rest of the herd in the large field. Red first worked Razz the way a cutting horse works a cow, which I found disturbing—I thought Red was harassing his donkey friend. But when Razz ran between a large tree and the fence for relief, Red left him alone. This carried on a few times before I realized Red was putting Razz there for safekeeping.

In July, Red seriously coliced. As I walked him for hours over the next day and a half to try to ease his discomfort, Razz came with us. I laughed at the ridiculousness of the situation as I took them out of their stalls at 2 a.m. to let Red nibble grass (he could have about three minutes’ worth at a time) and get him walking again. I saw my moonlit shadow against the grass, Red snorting and puffing his nose, walking briskly next to me, and Razz dragging along behind me—in their usual places.

Razz hung out with us the whole next day as I realized Red wasn’t going to pull through this bout of colic. Razz was calm through the whole ordeal, until he let out his wailing bray when we returned him to the pasture after Red was put down.

To see Red and Razz standing next to each other, you might call them The Odd Couple, but their relationship worked. Watching their bond evolve over eight and a half months and observing how it changed each other’s relationship with the other horses was an interesting study of herd dynamics. I’ve always been fascinated with animal behavior and herd dynamics—everything we do with horses boils down to these factors. To see this horse and donkey, in turn, watch out for each other was heartwarming. Razz’s charm and steadiness—not to mention the way he’d protect Red from dogs, including my own, that entered the paddock—turned me into a miniature donkey believer.

One reply on “Horse and Donkey: An Unlikely Friendship”

[…] someone for the first time can be hard. The idea of becoming best friends is probably at the forefront of your mind. You want to appear calm and collected, and not show your […]