Photo by Audrey Pavia Rio and Milagro – Houdini’s relatives reincarnated? You’d think I kept monkeys instead of horses, with the problems I have keeping my animals confined to my backyard. Seems one or both of my Spanish Mustangs manages to escape the back part of the yard and find their way to the back […] 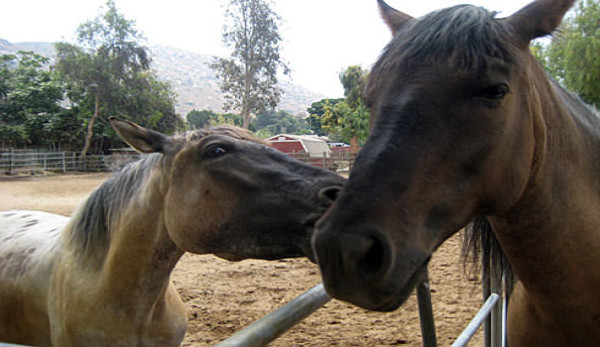 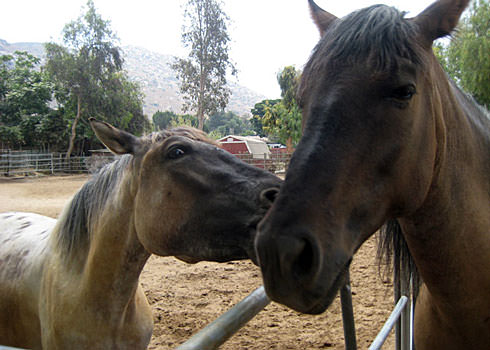 You’d think I kept monkeys instead of horses, with the problems I have keeping my animals confined to my backyard. Seems one or both of my Spanish Mustangs manages to escape the back part of the yard and find their way to the back lawn on a regular basis.

How do they do it? Most of the time they simply outsmart me. As my husband, Randy, says about our animals, “You can never make a mistake.” If you do, they will seize the moment and you’ll live to regret it. Like the other day: I came out in the morning to feed the horses their breakfast and found Rio grazing on the lawn. How did he get out of his stall and out of the back part of the yard, which is sectioned off from the lawn and patio?

After I spent 5 minutes trying to catch him, I did a little detective work and figured it out: I had inadvertently left his stall door unlatched. Even though the stall gate was closed and flush against the fence, Rio had discovered it wasn’t secured and pushed it open with his nose.

Next, he discovered that I had not latched the chain on the portable fencing panel that separates the horse section of the yard with the path that leads from the tack room to the driveway. He simply had to push the fence panel aside with his nose — far enough to allow his body to go through.

Milagro was the first to discover that the fence panel could be moved. This was before I put a chain on it and hooked it to the retaining wall. I used to just push the panel against the wall, and it worked to keep the horses confined to the back area when they were out of their stalls walking around. Milagro figured out he could just push the panel aside, making an opening big enough for his body.

Milagro also discovered how to open the latch on the split-rail fence gate that divides the stall area from the lawn. Using his incredibly dexterous lips, he learned to flip up the latch and then push the gate open with his muzzle. I had to thwart this during his turnouts by buying a carabineer and hooking it through the lock hole on the latch.

The goal behind all these elaborate equine escape maneuvers is to get to the lawn. Juicy and green, the horse’s lust after it. I used to let them graze there a few years ago just to give them an opportunity to fulfill their natural urge to graze, but I soon realized they were destroying my lawn. The horses left giant holes in the grass with their hooves and they broke the sprinklers by stepping on them. They also ripped chunks of lawn out by the roots and then left the root balls shriveling in the sun.

I decided quite a while ago that the lawn was off limits, but obviously, my horsey crew has other ideas.