How Hedy the Buff Polish Hooked My Family on Chickens

I met Hedy one Thanksgiving when she was a chick at my mother's house. I had the chance to take her home—and she changed everything. 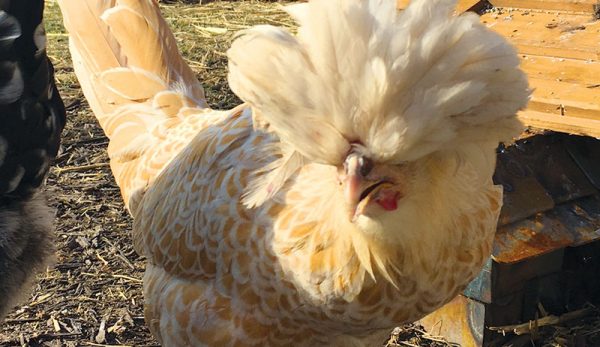 I first met Hedy while visiting my mother in Colorado: The little spring chick huddled with other chicks in a cardboard box at the post office at 6 a.m. With a few other fluffy yellow birds bravely “cheep-cheep-cheeping” their way into that first week of their lives, the postmaster gave my mom the straight run of fancies she had purchased from a hatchery in Ohio.

I couldn’t tell you which one was Hedy then, honestly. She probably had a tiny tuft of feathers atop her little head, like a good Polish should. All the chicks were soft, warm and, literally, stinking adorable, surviving the trip from Ohio to the Rocky Mountain State.

Back at my mom’s home, we carefully placed the chicks in a large metal washtub filled with bedding, with a heat lamp off to one side. A low bowl of chicken starter and a watering container, although starting pristine, were a mess within minutes.

By late fall, dear Hedy and her boxmates were still growing and had been accepted into my mother’s much larger flock of 30. Hedy survived this transition and was becoming the beautiful young chicken she was born to be. As I drove in from Illinois with my family for Thanksgiving, my mom called and asked whether we would consider taking home some of her chickens. After consulting with my husband, we jumped at the chance. It seemed Hedy would head back to Illinois. Driving five chickens, two kids, two parents and a teacup poodle over four state lines in 15 hours, we made it home before midnight.

Backyard chickens are just beginning to catch on in our area. Most people here have never seen the exotic breeds like our Polish and are fascinated by our flock. Hedy, being a very tame Buff Polish “with funny hair,” as many kids call her headdress, is always someone’s “first hold” in chickendom. While she is closer to the bottom of the flock pecking order, she is the highest attention-getter among humans. Everyone loves Hedy, and she has been featured in many selfies and social-media posts with her new human friends.

Last spring, we added three hens to our existing five. They have been a wonderful addition, but the pecking order has been turned upside down. Hedy used to be somewhere in the middle with her old sisters, but now she’s at the bottom with the addition of the new.

Living beside the Mississippi River, we have an enormous variety of birds of prey, including bald eagles, prairie falcons and red-tailed hawks. Lots of old trees inhabit our area, too, so owls love it here as well. Hedy and her flockmates have survived multiple air attacks. We always keep an eye on the sky when they are free-ranging.

Aerial assaults aren’t the only hardships for our flock. Weather can be unpredictable, too. Winter that first year was snowy and icy across much of the Midwest. Our backyard was no exception. But one warm, sunny morning, I left the door to the coop open and my girls happily spilled out into the snow.

Watching carefully and monitoring the yard, I went about my day, occasionally checking in to make my regular chicken count. Afternoon came, and as I counted my girls, one was missing. It was Hedy. I made a quick search of the yard to no avail. My son joined the search, and we began to scour our property.

We finally saw dear Hedy on her back on the frozen stones between some patio furniture that had been set on its side to weather the winter. With superhuman strength, my son pulled away the heavy furniture, and I gathered Hedy into my arms.

My son began to sob, thinking his favorite girl was dead. We had no idea how long she had been there. She was listless and cold. We brought her into the house and nursed her back to health with warm blankets and a water-filled dropper. Her tail feathers from then on were crooked, off to one side a little. But she did recover. In fact, it gave her even more personality to go with her beauty.

Molting time for my flock is awful. The ladies look pathetic, feathers drooping and falling off so much it looks like a down pillow exploded in the coop. They resemble children who have taken scissors to their own hair without their momma knowing it. I have read that it can be a painful process to regrow pinfeathers, and my girls get easily agitated with one another.

During one molt, Hedy, with her majestic bouffant atop her head, had some real issues. I guess it was a rough day in the coop because I found her with blood running down her beak and one eye sealed shut. Her pinfeathers had been broken off and part of her beak had been pecked. The claw on her right foot had also been dislodged and was bleeding. Once again, we carefully nursed her back to health. Sweet Hedy was now blind in her left eye, but she did relearn to walk, high stepping with her left foot in a somewhat comical way as she regained her balance and perspective.

Watching Hedy step forth bravely in spite of what she has lost gives me pause to think about my own life. Not only has Hedy lost her original home and flock but also her position within ours. Physically, she no longer has her straight tail feathers, full eyesight, a toenail or even the ability to walk normally. However, she still walks about the yard, friendly to all, head held high. She knows that no matter what the other chickens think of her, she is still her master’s favorite. To me, she remains the beautiful bird she was born to be.