How Do You Make Money Farming? Raise Meat Goats 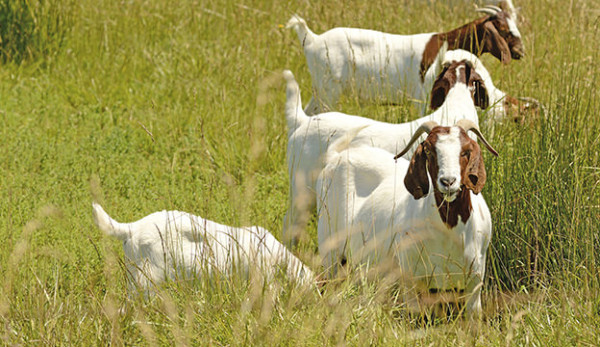 If you’d like to turn a profit raising livestock, consider meat goats. Established goat entrepreneurs are struggling to provide America’s goat meat buyers with a ready supply of tasty, wholesome product. It’s a wide-open market and many more producers are needed. Sixty-three to 65 percent of the red meat consumed globally is goat meat.

Americans of Hispanic, Caribbean, Mediterranean, Eastern European, African, Middle Eastern and Southeastern Asian origin are clamoring for goat meat, as are a burgeoning number of health-conscious buyers who favor goat meat’s lean, high-protein goodness. However, American producers are so unable to meet those demands that a staggering amount of chevon (goat meat) is imported each year.

Consider this: Cabrito, the tender flesh of 10- to 12-pound, milk-fed kids, is a delicacy among Hispanic consumers. America’s Hispanic community is more than 35 million strong; by 2025, Hispanics will make up 18 percent of our population. If current growth patterns continue, by 2050, one out of every four Americans will be Hispanic; yet already Hispanic demands for quality cabrito and chevon drastically exceed supply.

According to census figures, 16.8 percent of Florida’s population is Hispanic, yet 85 percent of dressed goat meat marketed in Florida is imported!

Muslim families also prefer goat meat. Chevon is the mainstay of religious feasts held prior to Ramadan, at ‘Id al-Fitr and at Id al-Adha, as well as at weddings and other family celebrations throughout the year. When it’s available, it’s enjoyed as everyday fare.

Americans of Caribbean descent prefer meat from mature goats for use in jerked dishes and curries; Jewish consumers buy milk-fed kids for Passover and Hanukkah; Asian buyers favor meat from older kids. The market is out there, but there are many more reasons to look into goats.

Getting Started With Goats

Goats are browsers, not grazers. Goats flourish on land that would starve a horse or a cow. They drool for blackberry canes, multiflora rose, kudzu, poison ivy and leafy spurge, and they rhapsodize over saplings, suckers and brush.

In an Australian study, the stomachs of free-ranging goats were found to contain approximately 72 percent browse and only 28 percent grass; goats pastured with grazing species (horses, cattle and sheep) don’t compete for choice grasses and open brushy areas for their pasturemates to dine on. For hundreds of years, farmers and ranchers have employed goats to clear rough land. You can, too.

Moderately-priced does of mixed meat breed ancestry are readily available. Breeds include:

Purebred or high-percentage meat breed bucks cost about the same as a registered bull.

Besides preferring browse to prime grass, six to eight goats flourish on the hay and concentrates needed to nourish a single cow or horse.

Goat housing is the essence of simplicity: Keep goats dry and out of drafts, and they thrive.

Existing farm fences can usually be goat-proofed with additional strands of barbed or electric wire. Goats are intelligent, friendly and just plain fun to have around. A passel of kids with access to climbing toys is good for more laughs than comedy TV!

And there is more than one way to market meat goats.

For those who choose not to raise goats for slaughter, a strong demand exists for quality meat-breed show and breeding stock.

Two years ago, when Claudia retired from her position as Accounting Supervisor at California’s famous Folsom Prison, the Gurns packed their worldly belongings, their Boer goats, and their livestock guardian dogs and their household pets (including Cash, the Folsom Prison cat), and set off cross-country for a new life in the Missouri Ozarks.

When asked why they chose this region, Claudia laughs. “Cheap land,” she says.

“And I grew up in the woods, so I wanted to live back on the deer trails again. We chose this place,” she adds, gesturing out the window at their beautiful river-bottom farm, “for a special reason. Matt and I are Christians and our faith is important to us. We’d looked at other properties but they didn’t suit us for one reason or another. Then we found this place. We liked it, but when I saw the aerial map of this property, I knew we’d been given a sign. From above, this property is shaped like a fish!”

Nestled in the wilderness of a lush, green valley under towering Ozark cliffs, MAC Goats is surrounded by the Mark Twain National Forest.

The nearby Eleven Point River, one of Missouri’s Ozark National Scenic Riverways, draws hundreds of thousands of tourists to the area each year. Their home was built in 1894, and though they’ve added on and renovated, the Gurns strive to preserve its original character. Its small, neat rooms are furnished with antiques and Claudia’s own artwork; awards from prestigious Boer goat shows are frosting on the cake.

“We weren’t the first Boer breeders in North America,” Claudia explains, “but we were one of the first in California. We already had Nubians, but when Boers came along, they simply swept us off our feet. We were blessed when we bought our foundation stock. We’ve always had outstanding bucks. Our first was Chieftain. He came from South Africa to Canada as an embryo. We showed Chieftain twice, winning two Grand Champions and two Best of Shows, along with 55 points toward his Ennoblement—that’s the highest honor a Boer goat can earn. Chieftain was the sweetest guy and he sired the nicest babies. He really got us off on the right foot.

“Chieftain sired Chief Forty-Five—we call him Chiefee—and Chiefee is still with us. He and his get helped us win the California Premier Breeder Award in 2001 and he’s collected 70 Ennoblement points. He’s the best, a real character; Chiefee is a gift from God. He’s my pal and loves to rest his chin on my shoulder. Once he won an award for most popular goat at a show, based on spectator applause. He and Chieftain sired so many of our does that we don’t use Chiefee much nowadays, but he’ll always be a part of life at MAC Goats.”

The breed’s origin traces back to the 1880s when a transient farm worker, John Tinsley, came to central Tennessee in the company of several strange goats. When startled, they stiffened and often toppled over onto their sides or backs.

Folks liked these animals. They were meatier than most goats and their peculiar condition kept them from scaling enclosures in the manner of everyday goats. When Tinsley moved on, his “fainting” goats stayed behind to found a dynasty of their own.

In the 1950s, a passel of Tennessee Fainting Goats was exported to the Texas hill country where they evolved as the Texas Wooden Leg goat.

The 1980s proved a parting of the ways for the two. One group of fanciers began selecting for meat qualities such as greater size, growth rate and reproductive efficiency; another for pronounced myotonia and reduced size.

Because of this divergence, today’s myotonic goats range in weight from about 60 to 200 pounds.

When asked how readers might emulate their success, Matt replies, “They need to learn everything they can before they buy. They should learn:

“Join e-mail lists,” Claudia adds. “I subscribe to 23 goat lists myself. Ask questions—goat people are so good about helping one another. If you want to sell breeding stock, you need to use popular bloodlines and expect to show. It’s costly, but wins prove you’re breeding good goats. And advertise! Produce a quality product and let people know that you are. Put up a Web site that encourages people to come back again and again. Our educational Web site draws hundreds of hits a day,” she continues. “People come to research a subject, then they see our MAC goats and often want to buy!”

What to Know About Slaughter Goats

“Not at all,” Matt says. “No matter what you do, you need a good buck because he has an impact on every kid you raise. A really good buck may seem expensive, but when his kids sell for more money or are marketable sooner, that quickly brings down his initial cost. You want to buy from breeders who participate in performance testing or who track weight gains. We weigh our kids at birth and again when we wean them at three months. We post the results to our Web site. Recording weight gains shows breeders—and buyers—which bucks are siring quick-maturing kids. With an average buck you might market 5-month-old kids weighing 50 pounds. At the same age, kids by a better buck might weigh 60 pounds. You can market those kids sooner, and the sooner to market, the less you’ll feed them. Some of our kids weigh 90 pounds at three months! Over time these savings add up.

“Commercial producers don’t need registered stock. Most will use a good meat breed buck on mixed-breed does. What’s important in a commercial program is producing fast-growing, meaty kids tailored to supply a given market. To show a healthy profit, you’ve got to take care of your commercial breeding stock and keep it healthy, but not spend a lot of money doing it.

“And no matter what kind of goats you raise, registered or commercial, you need good does. They should have good udders, produce enough milk and want to take care of their kids. Does that produce twins work best for us since we don’t like to spend a lot of time bottle feeding, but a commercial producer might want triplets or quadruplets. Bottle-raised, the extra kids mean more meat to take to market.”

And what lies ahead for MAC Goats?

“Only the Lord knows for sure,” says Claudia, “but we plan to keep raising Boer goats. We’ll continue showing, too. Boer goats we’ve bred have won 101 Grand and Reserve Championships. In three months of showing, Hoss, our present herdsire, earned 105 points toward his Ennoblement and he’s passed visual inspection, so we’ll be showing some of his sons and daughters to finish his points. We consigned 30 of our best young goats to the Diamond Classic Sale coming and ended up with the two top-selling bucks for $2,200 a piece and the top-selling doe for $4,200. The doe, a 7-month-old Hoss daughter, had been shown four times, always at large breed shows, and had won her class every time, along with an Overall Grand Championship, a Junior Championship and a Reserve Championship. We sold her so someone else can start their herd or expand their show string with the kind of high-quality goats we were blessed with when we began. To us, that’s what this business is about.”

From show stock to meat market, the meat goat business is booming. Are there meat goats in your future?

This article first appeared in the Jan/Feb 2006 issue of Hobby Farms.