How Grass Farming Promotes Your Own Health

Grass is good for our animals Their diet is critically linked to our own in addition to those of our family members. 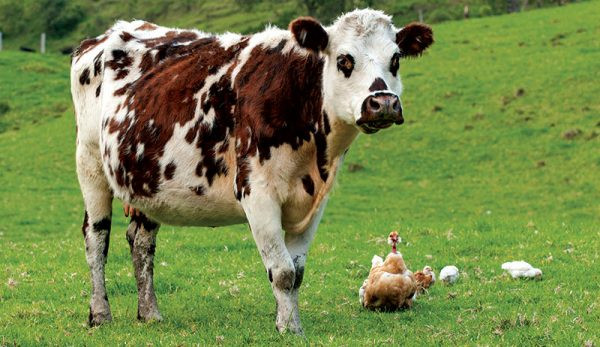 You are what you eat. How often did you hear your mother say that? Or a teacher at school? A well-meaning caregiver? We are what we eat, and we are what we eat eats. A sentiment that was quickly lost in the era of grocery stores and convenience food, many of usâ€”and our children and our parentsâ€”have lost touch with the most basic law of consumption: We are only as healthy as the food chain of custody.

I had the pleasure of meeting Joel Salatin of Polyface FarmÂ at an event in Asheville, North Carolina, in the spring of 2014. Salatin co-owns, with his family, Polyface Farm in Swoope, Virginia, and was featured in The New York Times bestseller The Omnivore’s Dilemma (2006) by Michael Pollan, and the award-winning documentary Food Inc. (2008). Salatin is also a noted author on agriculture topics.

At the back of a chicken-processing demonstration he was presenting, I stood and bounced my napping baby in a carrier soaking up every word and recommendation. I had read several of his books, and even books that featured him, but just as we canâ€™t fully grasp the reality of parenthood until itâ€™s in our midst, I hadnâ€™t fully grasped the how critically linked my chickenâ€™s diet was to my own or my childâ€™s.

In The Omnivore’s Dilemma, Salatin shared a revelation: We have been collectively casting aside the critical role of grass in our ruminantsâ€™ diets in favor of cheap, genetically modified grains, something we either havenâ€™t cared to admit or havenâ€™t thought enough about.

â€śWe do not honor grass,â€ť Salatin said. â€śWe honor corn and cotton and soybeans and rice [and] sugarcane. Those are the five subsidized commodities in this country. Grass is like the ugly step-farmer.â€ť

His point was simple: If we respect, cultivate and graze our animals on grass, they will be healthier eating what they are designed to eat, and we will be healthier for it. Everyone who raises chickens, cows and other grazers would do well to become a grass farmer.

The tenet of grass farming is simple: Care for the grass by mimicking the natural habits of grazers and the cycles of nature, and you will produce healthier animals and healthier meat and eggs. Grass farming requires commitment and education, but as Salatin said, itâ€™s a lot more fun than conventional farming.

On Salatinâ€™s farm, animals are rotated daily to give the grass rest and rejuvenation, and in a particular order to mimic the way animals would graze in nature: Birds follow the herbivores. Cows keep the grass short, so the birdsâ€”chickens, turkey and so onâ€”can reach the freshly
exposed insects and shorter grass.

(They canâ€™t handle tackle the tall grass on their own.) The birds pick through the cow patties to spread the manure, benefiting the cows and the soil/grass, and â€śharvestâ€ť the fly larvae (a natural source of nutrition).

The result is a beautifully orchestrated dance of resourcefulness and harmony, as close to perfect as agriculture can get: healthy animals, healthy land, healthy human bodies.

Grass farming has larger implications, and theyâ€™re ones we should all be considering. By rotating pastures daily, large amounts of biomass can be doubled and tripled as the land heals. In using this method, we could help to reverse our impact on climate change in about
a decade.

According to Salatin, if we just increase soil organic matter on the pasture lands of the United State by a single percentage point, we could sequester all of that carbon thatâ€™s been emitted since the beginning of the Industrial Age.