How Honeybees Pollinate (And What They Do With Pollen)

Farmers depend on the work of honeybees to pollinate their crops, but the bees also get something out of the deal. 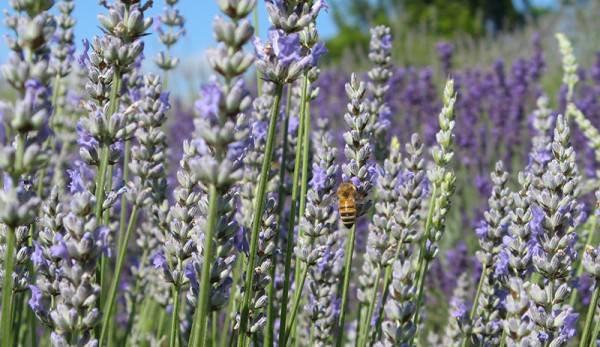 Avid gardeners, homeowners and farmersâ€”large and smallâ€”revere the honeybee and her native cousins (such as the bumblebee, mason bee and various wasps) for their ability to pollinate crops. Proper pollination of crops yields bigger harvests, and whatâ€™s not to like about that? But did you know that thereâ€™s something in it for the honeybee, too?

For such a critical event, the process of pollination is deceptively simple. A fruit-bearing plant will produce brightly colored flowers intended to attract pollinators. When the flower blooms, pollination may begin. The male part of the flower, called the stamen, produces the pollen. The center â€śstemâ€ť rising up through the center of the flower is the female part, called the pistil. At the top of the pistil is a sticky part, called the stigma, and this is where pollen must end up in order for the plant to set fruit. Seeds, which will eventually become the plantâ€™s fruit or crop, are made in the ovule, which is at the base of the female pistil, and will only grow if the flower is properly pollinated.

So how does the pollen reach the stigma? This is where our friend the honeybee comes in. Covering her body are tiny hairs that collect pollen. As she floats from flower to flower, her body rubs up against the stamens, gathering pollen. A busy worker out in the field can often be spotted with tiny yellow, orange, red or even purple (depending on the cultivar) particles of pollen covering her body. She then visits another flower, where she transfers the pollen to the stigma of the next flower, pollinating it. The seeds at in the pistilâ€™s ovule can now begin to grow into fruit.

Itâ€™s a neat trick, isnâ€™t it? The honeybee is likely not aware of how crucial a role she plays in this process. She is initially attracted to the nectar produced by the flowers, and the pollination process appears to be inadvertent. One of the most incredible things about the whole dance is that there is no risk of cross-contamination of different crops beause a single forager bee out in the field will only visit one variety of plant per flight.

Whatâ€™s In It For The Honeybee?

So what else does the honeybee get out of this deal? She seems to work a lot for the flowers, who, admittedly sit quietly and await her work. Well, nectar, for one. The honeybee collects nectar from the flowers and returns it to the hive, where her sisters store it into cells, add special enzymes, fan it with their wings, and turn it into honey.

She also gets any surplus pollen out of the deal, which is quite a perk. When the foraging honeybee takes a break, she cleans her body with her back legs. As she does so, the pollen collects into tiny balls on the tops of her back legs, called â€śpollen baskets.â€ť She carries these baskets home with her to the hive, where they are stored in cells, and fed to all members of the hive. While honey provides the carbohydrate source to honeybees, through the winter and all year round, pollen, which has more protein pound for pound than beef, provides the bulk of her nutrition. The more variety in flowering plants in the colonyâ€™s foraging radius, the more variety of pollen the bees consume, and the better the hiveâ€™s health. Everybody wins.