Construct a hose system to easily fill water troughs for your animals while they're out on pasture. 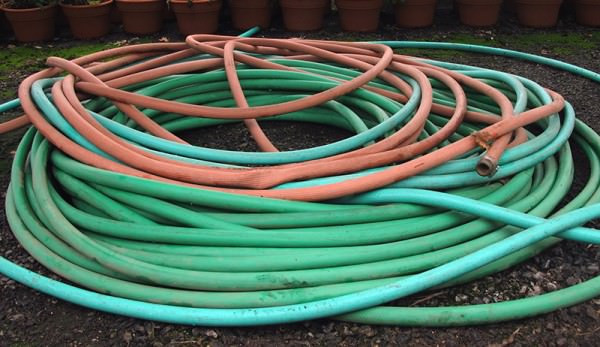 Farm animals need waterŌĆöthat much is indisputable. They need it whether theyŌĆÖre in their barn or roaming a large pasture, and itŌĆÖs the latter that presents an intriguing challenge: What is the best way to deliver water to troughs several large pastures?

Being fortunate enough to have more than a half-dozen horse pastures, IŌĆÖve experimented with a few different techniques for delivering water there. IŌĆÖve filled up large jugs, put them in a small wagon, and hauled them around with a small tractor. This works fine, though the heavy load and bumps on the roads arenŌĆÖt the best for the wagon. And it doesnŌĆÖt take long before something breaks because the water is just too heavy for my small wagons to carry over uneven terrain.

Eventually, I settled on a completely different approach that doesnŌĆÖt involve jugs and wagons of any sort. Instead, I use hoses (and a lot of them!) strung together to deliver water to my pastures.

Whether this approach makes sense for you depends on the setup and size of your pastures, along with personal preference, but if youŌĆÖre intrigued by the thought of using hoses to distribute water, hereŌĆÖs how my setup works.

Set Up Your Hoses

Starting at the nearest water spigot, start connecting hoses together with rubber washers at each connection, then string them out in the direction of your pastures. I donŌĆÖt run mine through the pastures; instead, I let them follow the fence lines.

Whenever you reach a bucket or trough, attach one Y-joint so that you can split the flow of the water. On one half of the Y-joint, attach a short hose with a nozzle on the end to use for refilling the water container; on the other half, attach a long hose to continue on to the next bucket or trough. Keep repeating these steps until your hoses have spread to everywhere they need to reach.
Once they’re in place, you should be good to go! Now, you can deliver water simply by turning on your spigot, walking the path of the hoses, and turning Y-joints and nozzles on and off to direct water wherever you need it.

Every once in awhile, itŌĆÖs a good idea to bring your hoses back and check them for damage. At this time, I also clean them by directly attaching each one to my spigot and running water through them at high pressure, but basically, the hoses require little maintenance or effort to use.