How Much Coop Space Do Your Chickens Really Need?

Provide enough room in the coop and run so that your chickens can live out happy, healthy lives. 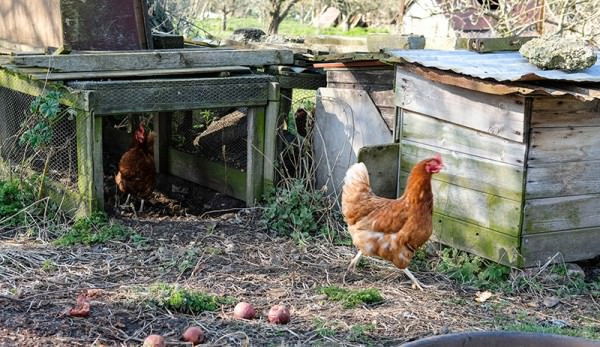 By nature, chickens are meant to roam, graze and hunt. Their jungle fowl ancestors passed down the instinct, but human domestication of chickens over time has removed some (not all) of their own protective abilities out in the wild. Some breeds are better rangers than others, and some smaller, meeker breeds actually prefer to be buttoned up in confinement. Confinement, on the other hand, can conjure images of inhumane 1-square-foot cages, or hundreds of broilers bring raised wing-to-wing in a â€ścage-freeâ€ť barn.

In the backyard or on the hobby farm, thereâ€™s a lot of room for a happy medium. For the health of the flock and for the health of the meat and eggs you harvest from the flock, the amount of space you offer them to roam is one of chicken keepingâ€™s biggest, most important decisions.

Inside a coop where hens lay eggs, rest and snuggle on the roost at night, large chickens (versus small bantams) need at least 4 square feet per bird. Many coop-building tutorials will advise this amount of space in both the coop and run with little mention of ranging or confinement living. Unfortunately, the modest 4 square feet per chicken is a minimum estimate, and it should be considered for short-term confinement use and daily overnight protection only. This minimum coop space should be considered only for a flock that spends most of its daylight hours free ranging in the yard or with some other protection at pasture.

My 8-by-4-foot A-frame mobile coop has enough square footage in the run (minus the coop space above it) to pass the minimum 4 square feet per bird recommendation, but itâ€™s not enough room for my eight chickens for any longer than a short weekend awayâ€”their behavior in confinement tells me so. Weâ€™ve built an additional 8-by-4-foot run extension, which we attach it to the existing run to double their space for short weekends when we canâ€™t allow them to free-range unsupervised.

In confinement, a flock should have enough space available to satisfy natural behaviors, get exercise and even spend time alone. Think of extra space as being necessary for personal care. When adding extra space for a long and healthy life of confinement, count on this extra space being room for play.

Inside a coop, hens will often share a favorite nest box or two, so extra space inside the coop will often go unused, especially in the summer. In the winter, extra space holds more cold air that chickens have to fill with body heat, so donâ€™t waste space; just 4 square feet per bird is a fine estimate for indoor coop space. However, outside run space should extend to a full 10 square feet per bird, another minimum recommendation. Even better would be doubling the run area to 20 square feet per bird, construct the run height to 6 feet tall, and install roosts the chickens can fly to. The goal in confinement should be to mimic real outdoor living.

Inevitably, most of us become obsessed with our chickens, so three chickens turns into five chickens turns into 12 chickens, and so on. This is called chicken mathâ€”the unintentional multiplying of a flock size. Donâ€™t risk overcrowding in your coop. Build more space now and your future chickens will thank you with happy lives and healthy eggs.