Miniature cattle have become a hot livestock property. Learn the history and evolution of these diminutive breeds. 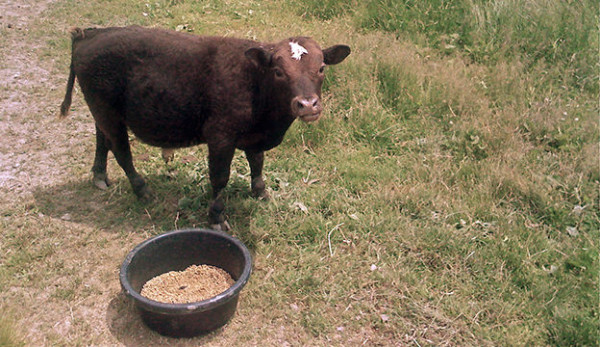 Once upon a time in the early days of the 20th century, cows didn‚Äôt weigh 1,200 pounds nor did bulls tip the scale at over a ton.

Cattle were smaller, compact and kind. Bred for family utility, they put rich, creamy milk in the icebox and lean, tasty meat on the dinner table.

Simple fences contained them or families tethered them in yards on chains. They thrived on simple fare: cut-and-carry forage and mangels, or other root crops from the garden. Children handled them and sometimes called them pets. Most families had such a cow and life was good.

Times changed. Mankind migrated to the city. People lost touch with the family cow, yet they yearned for milk, butter and steaks.

Enter the new millennium. For city folk and suburbanites retracing their forebears‚Äô paths back to the farm, today‚Äôs hobby farms are perfectly sized for yesterday‚Äôs cherished small cows.

And they‚Äôre out there: wee cattle as ancient as the dual-purpose Dexters and as innovative and new as the Happy Mountain Miniature Pandas.

A brand new legion of hobby farmers are rallying behind miniature cattle.

‚ÄúTheir small size makes them easier to manage and less destructive to fences and equipment,‚Äù explains Linda McKay of AAA Lowlines, Harker Heights, Texas. ‚ÄúThe stocking rate is two or three minis to one full-size cow. They can be used for beef and/or milk‚Äîand they are just plain cute!‚Äù

However, minis are like potato chips, you won‚Äôt settle for just one. And for the small-scale farmer hoping to qualify land for ag-tax breaks or to turn a profit, this is a very good thing indeed.

Beth Diaz of Seffner, Fla., concurs. ‚ÄúWe live outside of Tampa Bay in a small agricultural area,‚Äù she says. ‚ÄúWe wanted to take advantage of tax cuts and also have cattle to help keep our pastures clean. Essentially, we wanted to become gentleman farmers. We weren‚Äôt looking for meat sales, so we decided to stick to one breed and raise babies to sell for 4-H or to others interested in our breed. One day my search led me to a Miniature Zebu website and I was hooked.‚Äù

Yet minis do equate with fine beef. Gourmet markets and upscale restaurants clamor for lean and luscious, grass-fed mini steaks and roasts.

Texas A&M confirms a 20 to 25 percent higher feed conversion rate for miniature cows. And a single miniature steer neatly packs the average home freezer, so there‚Äôs no need to find someone to buy the other half of beef, making the meat popular with home consumers.

And dairy breed and dual-purpose minis give plenty of sumptuous, high-protein milk‚Äîenough for today‚Äôs smaller household and then some. Mini Jerseys, Belfairs and Dexters all serve well as gentle family milk cows, exactly like their ancestors did not so very long ago.

And They Make Good Pets

And gentle they are. Mini cattle fans unanimously agree: These little bovines make marvelous pets. ‚ÄúI started with a trio of Miniature Jerseys,‚Äù says K.C. Cowen of Emmett, Idaho, ‚Äúbut I have disabilities and couldn‚Äôt milk more than one. So now I have just Margie. She‚Äôs the light of my life and the sweetest cow I‚Äôve ever owned. Margie is like a big dog, except she gives the best milk.‚Äù

Petting zoo proprietors and animal therapy workers adore miniature cattle; 4-Hers tend to love them too. Their modest stature, winsome looks and engaging personalities render them less intimidating than their full-size cousins, and they are far less bulky to load and pack around.

What is a Miniature Cow?

Are today‚Äôs miniatures mirror images of our ancestors‚Äô small utility cows? Yes … and no. Miniatures with standard-size counterparts such as Jerseys, Lowline Angus and Herefords usually are. But other mini breeds (such as Miniature Highlands, Longhorns and some of the International Miniature Cattle Breeders Society and Registry breeds) are modern creations developed by crossing small standard-size cattle with established small breeds (usually Dexters).

And the Dexter stands alone. Because of its elfin stature, most folks consider the Dexter a miniature. However, they‚Äôre a diminutive ancient breed rather than a scaled-down modern one.

How tall is a mini cow? That depends.

According to the International Miniature Cattle Breeders Society and Registry (IMCBSR), any bovine 3 years of age or older measuring 42 inches or under at its hips is a miniature; a second classification, ‚Äúmidsize miniature,‚Äù exists for minis over 42 inches and up to 48 inches tall.

International Miniature Zebu Association cattle, however, are measured behind their Brahma-type humps and mustn‚Äôt exceed 42 inches at 3 years of age. The American Hereford Association stipulates that Miniature Herefords must tape 43 inches or smaller; ‚Äúclassic miniatures‚Äù can be up to 48 inches tall. Lowlines (Miniature Angus) may be 42 inches high, as can Dexter cows; Dexter bulls can be two inches taller.

Who registers them? The IMCBSR maintains herd books for 26 breeds and the Animal Research Foundation registers miniature bovines of every breed. Miniature Herefords, Angus (Lowlines), Zebus, Jerseys and Dexters can be registered with both organizations but also support herd books of their own.

These represent the big five of the miniature bovine world.

Today‚Äôs Dexter cattle descend from a herd of hardy Irish mountain cattle assembled by Mr. Dexter, agent to Lord Hawarden, around 1750. Dexter roots trace to the tiny Celtic cattle of ancient Eire. By 1845, when author David Low described and referred to them by name, they already resembled today‚Äôs Dexter cattle.

Irish fanciers established a Dexter registry in 1887 and an American version followed in 1911. Yet North American Dexters were ever scarce; today they‚Äôre included on the American Livestock Breed Conservancy‚Äôs Conservation Priority List, classified as rare. (If you‚Äôd like to help preserve an endangered heritage livestock breed, consider raising Dexters. They need your helping hand.)

Dexters are strikingly small cattle. Most Dexters are colored in shades of deepest ebony to sun-tinged, reddish-black. Reds and duns are far less common and grade from palest red to darkest mahogany; reds have pink noses, while duns have brown noses. Black-tipped white horns usually accent their small, neat heads, although a line of polled (hornless) Dexters now exists. There are two types: a longer-legged version (Kerry type) and a Dexter with shorter legs.

Dexters are dual-purpose cattle. Thanks to the breed‚Äôs foraging ability, and its high feed conversion and meat-to-bone ratios, a grass-fed Dexter steer will finish in 18 to 24 months, dressing out at 50 to 60 percent live weight. Dexter beef is fine-textured, tender and delicious. And Dexter cows give 1.5 to 3 gallons of roughly 4 percent butterfat milk daily, at a rate of up to one quart of cream per gallon.

Dexters are famous for their strong maternal instinct, easy calving, sweet dispositions and longevity. They do, however, occasionally throw dwarf ‚Äúbulldog‚Äù calves.

Lowlines are Miniature Angus cattle developed by the Trangie Agricultural Research Centre in Australia. No ‚Äúoutside‚Äù blood was used in its creation‚Äîthey are purebred Angus bred 30 to 60 percent smaller than their standard (Highline) kin.

Angus beef is treasured for its tenderness and quality, and pound for pound Lowlines produce a lotof it. Enthusiasts claim Lowlines require one third as much feed to produce 70 percent of the rib-eye of animals twice their size, making Lowlines a logical choice for organic and gourmet market beef producers.

Sleek Black Angus are traditionally more docile than other beef breeds. They‚Äôre naturally polled and prolific, and are attentive mothers. Lowlines are a red-hot commodity as pets and for purebred programs, and for crossing with standard-size cattle to improve meat quality. When crossed with Jerseys they produce the ideal dual-purpose family cow.

Another scaled-down purebred breed is the Miniature Hereford. In fact, miniatures are registered in the American Hereford Association herd book; their pedigrees are traceable back more than 100 years.

Miniature Herefords are said to mature 20 percent faster than standards. They‚Äôre gentle, they adapt to all climates, they‚Äôre highly efficient foragers, and veterinarians familiar with beef breeds know how to treat them. Miniature Herefords are a first-rate, easy-care choice for gourmet and organic beef producers.

Descended from South Indian Nadudana cattle, Miniature Zebus were imported for zoo display in the 1920s. Today the International Miniature Zebu Association (formed in 1991) lists breeders in 38 states, Canada and Puerto Rico. They are among the teeniest of miniature cattle, sometimes standing less than 30 inches measured behind the hump.

For today‚Äôs smaller households seeking a pocket-size family cow, Miniature Jerseys make good sense. They are gentle, prolific and a delight for the eyes. And their delicious, high-butterfat milk is hard to beat!

While Miniature Jersey steers don‚Äôt produce a freezer full of meat, what they do yield is mighty fine eating indeed. Therefore, Jerseys have been and are still being used to create new miniature beef and dairy breeds. Belfairs are Jersey and Dexter derivatives, as are IMCBSR trademarked Belmonts (both are sometimes called Irish Jerseys). Wherever they‚Äôre used, wee Jerseys sweeten the mix.

Getting Started With Miniature Cattle

Miniature cattle are generally in short supply. They‚Äôre available‚Äîbut expect to conduct a search before you buy.

Registries happily supply breeder lists; and e-mail groups¬Ýare excellent places to scout for leads. Expect prices to vary widely depending on breed and bloodlines, quality, age and sex, and in which part of the country you do your shopping.

A few progressive miniature cattle raisers market fullblood embryos. Implant success rate runs 50 to 60 percent, but it‚Äôs a start for those with access to a good reproductive vet and a sense of adventure.

Sometimes you can start with the cattle you have and breed toward purebred miniatures.

While mechanics vary from registry to registry, the basics are much the same. For example: You own a full-size Jersey cow. Breed her to your choice of miniature bulls. Her calf will be recorded (not registered) as a half-blood miniature. If the calf is a heifer that eventually gets bred to another miniature of the same breed, her calf will be recorded as three-quarters miniature. And on and on until your calf is 15¬º16 target breed, at which time it‚Äôs considered purebred.

However, not all organizations allow ‚Äúup-breeding‚Äù (the Lowline and Hereford registries do not) and most don‚Äôt record upgrade-produced purebreds in the same herd book as bona fide fullbloods. Regardless, it‚Äôs a fun and easy way to get started.

Cute and productive, miniature cattle will mow your lawn, pull a cart, or simply pretty up your pastures. Let your kids show them in 4-H. Drink their milk, pack your freezer with miniature steaks. They‚Äôll earn you tax breaks and turn a profit sold as breeding stock, pets or beef. What more could you ask for?