As green farmer wannabes, this couple used a year of renting land to make mistakes and truly investigate if farming was for them. 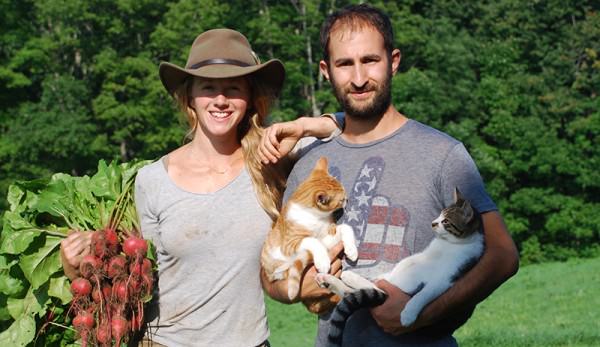 Before we had our own farm, my husband Nick and I were tenant farmers—and before that we were farmhands. In the years leading up to purchasing our own land, we gleaned and developed skills of animal husbandry and vegetable farming from our farm bosses and mentors. We formed many opinions about how we would run a farm when it was our turn. Our lack of humility and naiveté lead us to assume we were ready to start farming on our own. But with little money and no thoughtful business plan, we were thankfully many steps away from buying our own plot, as we had much to learn.

In the winter of 2012, we were living in a sunless basement apartment 20 miles outside of Boston. We had jobs raising laying hens for a prominent vegetable farm. There, we spent much of our time navigating the intricacies of livestock farming in the suburbs. We found the neighborhood embraced the romanticism of chickens but outlawed roosters citing noise. Similarly cows were welcome, but bulls were too dangerous. Raw milk was unlawful in our county, and hay cost $10 per bale. We became unable to reconcile our farming goals with the realities of the suburban setting, so we began our search for a place to rent in the country.

I spent that winter with both eyes firmly glued to rural classifieds. There were a couple such classifieds—beyond Craigslist—that proved particularly helpful: New England Landlink and NOFA Vermont. There were more opportunities than I had anticipated: There is an entire rainbow of landowners and older farmers looking for new bodies to take over the management of their land.

We corresponded with many such landowners, and the ad that eventually proved fruitful was amusingly succinct. The photo was of the outhouse and the listing read “2 room barn apartment at the end of a dirt road, no indoor toilet.” No elaboration was needed.

I reached out, convinced that the dead-end road was perfect for our flock of animals that habitually ignored their fencing. Upon further conversation with the landlord and a mid-winter visit to rural Vermont, we found the owners atop a hill with nearly 200 acres of fallow land, an empty dairy barn, and a view that was offensive in its serenity and tranquility.

We quit our paying farm jobs and moved as soon as the snow had melted and the roads were clear. Our starter package, such as it was, consisted of adopted animals from former employers. We had one Rotokawa Devon heifer, two Ossabaw Island hogs, a hive of bees, a flock of 20 muddled hens and one duck. From this we were certain (though the details were wonderfully hazy) we could create a farm.

We spent 15 glorious months on that hilltop forming our farm on borrowed land. Renting allowed us to investigate the role of farmer without the incredible financial undertaking that is owning land. It allowed for experiments and for many mistakes, success and failure at our own direction, with our own hands. It provided an introduction to the community where we would eventually settle. It gave us equal opportunity to either quit and retreat or move forward and grow.

That year, we made customers to whom we still sell our wares. We bought our first milk cow: a Jersey who was too skinny but we were too green to know. We scaled up raw milk and then switched our focus to beef after evaluating our efficiencies and our aching muscles from hand-milking. We gave up on selling eggs since the local market was saturated. We learned the delicacies of the short Vermont growing season. That summer we bought a trio of Icelandic ewes—spring lambs at the time that are now grandmothers of our flock. We acquired bookshelves worth of how-tos. We built everything out of scrap wood and metal. We foraged for our spring food. We canned for the winter. We battled prickers for baskets of berries in the summer.

Certainly, renting has its drawbacks. You must seek permission for much of what you do. Infrastructure development (a barn, a greenhouse) is limited when you don’t own the ground you’re building on. There’s always the fear that a change in ownership could end your lease. You may not see eye to eye with your landlord regarding the best use of the land. It is for these reasons that many people eventually seek to own, rather than rent land.

Even though we were eager to own land, a year of renting was immeasurably valuable. We would not be where we are as farmers today if it hadn’t been for that experience. Renting farm land was our first iteration of farming-on-our-own. I recommend it for anyone with intentions of one day farming their own land. It’s always nice to learn lessons on someone else’s land.

Kate MacLean is the pig and sheep shepherd at Longest Acres Farm, which she runs with her husband Nick. She breeds and raises Icelandic sheep for their fiber and meat, as well as Ossabaw pigs for their meat and breeding stock.