New hens are always exciting, but follow these important steps when you add a chicken to an existing flock to avoid fighting and injury. 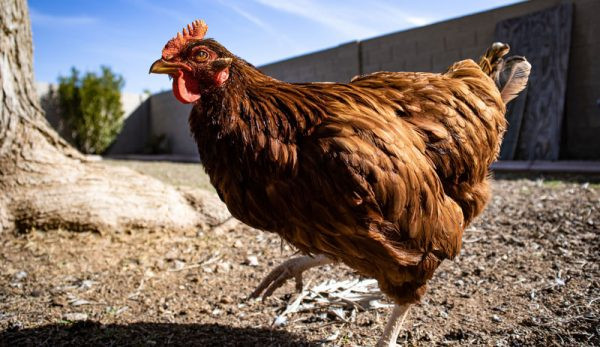 Our neighbor Bob started his chicken flock shortly after moving to our township five or so years ago. He was very excited to leave the city for life in the country. Bob couldn’t wait to fix up the property’s rundown coop and keep hens of his own.

It wasn’t long before we saw Bob’s flock contentedly foraging on his lawn. Bob eagerly embraced his new lifestyle and his new hobby of poultry keeping. He’d stop by every now and then to tell us about his girls’ antics and to ask advice about feeders, layer rations and supplements.

He enthusiastically joined dozens of online chicken groups. Frequently, he waxed poetic about the exotic breeds he hoped to own one day.

I was therefore surprised to unexpectedly find Bob parked in my driveway when I came home from errands late one morning. I was even more shocked to discover he was very visibly upset … and cradling a towel-wrapped bundle in his arms.

Inside the towel was a young hen, her wattles and comb very bloodied. The blood matted the feathers around her face. She held her eyes tightly shut. This poor girl looked like she’d been on the wrong end of a street brawl.

Read more: Make sure to include these items in your chicken first-aid kit.

It turned out that I wasn’t too far off in my initial evaluation. Bob explained that a member of his online chicken groups had decided to sell off his flock of Swedish Flower Hens. Bob jumped at the chance to own one of his dream breeds. He bought a year-old hen and arranged to have her shipped overnight.

Eager to add her to his existing flock, he waited until it was dark and his birds were asleep, then slipped her into his coop. When he went to release his flock in the morning, he was horrified to find several of his hens’ beaks streaked with blood. The poor little newcomer cowered in a nestbox, battered and bleeding.

I cleaned up the poor hen as best as I could, then placed her in a cardboard carton with plenty of shavings, a small dish of food, and a canning-jar waterer doctored up with electrolytes. Once she finally relaxed and settled down, I sat down with Bob, who was somewhat calmer now that his prize pullet was resting.

As gently as I could, given the poor guy’s emotional state, I went over a few crucial points regarding introducing a new bird to an existing flock.

Before you consider adding a chicken to your flock, especially one that was previously owned, make certain you ask as many questions as possible to determine the health and condition of the hen in question. This is particularly true if you are buying a bird sight unseen from an online source and won’t have the opportunity to examine it in person for yourself.

Having the answers to these questions will give you a better idea of what you’re actually buying. Don’t forget to request photos or a video clip of the bird in question. Walk away if the seller refuses to provide any visuals.

Ask for referrals to ensure your seller is reputable. If the seller lives in another state, check your own state’s National Poultry Improvement Plan (NPIP) requirements to ensure your purchase does not violate any laws.

Even if you get assurances that your bird is the healthiest chicken around, it’s crucial that you keep your new bird separate from your existing flock for at least 30 days. Housing for your newcomer during this isolation period should be at least 30 feet away from your established coop and run to prevent contamination by airborne agents.

A one-month isolation period will give any illnesses your new bird may have brought along time to manifest. Introducing a newcomer any sooner can run the risk of infecting your flock with an imported condition that might jeopardize their health … and lives.

Read more: Here are 4 steps to help you as you integrate new chickens into the flock.

Once the isolation period is over, your new bird is ready to join your flock. But your flock may not be ready for a new member.

Anything unfamiliar can be very disruptive to the existing social order of an established flock. Furthermore, if your birds are territorial or if you have a rooster, the newcomer may be seen as an invader and dealt with accordingly by your flock.

The most successful method of introducing a new chicken is by first getting the birds accustomed to each other visually. Set up a temporary pen close to your flock’s run so the birds can see each other on a regular basis.

After a week or so, move the pen into your flock’s run. This allows the chickens to be closer together, on your flock’s home turf. But it also maintains protection of the newcomer.

After another week, remove the temporary pen so that the new hen can spend the day with your flock. But be sure to return her to her own pen every evening.

Eventually your new girl will be fully integrated. At dusk, she will follow your flock into their coopâ€”now her coops as wellâ€”for the night. This might take anywhere from a day to a couple of weeks

In his excitement to add a Swedish Flower Hen to his flock, Bob forewent most of these preliminaries. Worse, he followed advice he’d seen in one of his online groups: sneak a new bird into your coop at night and, in the morning, the other birds will treat her as if she’d always been there.

Heâ€”and the little henâ€”sadly experienced the consequences of that advice first hand.

Fortunately, the Swedish Flower Hen, whom Bob named Petal, recovered completely. And after Bob followed my advice regarding a slow integration, she became a content member of his flock. So did several other hens he added after her.