How to Build a Cob House

To truly get in touch with the land you're on, build a cob house. 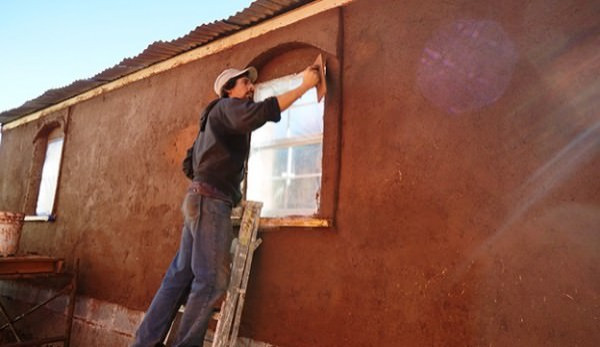 Natural building, as old as ancient cliff dwellings and as universal as paper wasps nests, was the norm until sometime in the past 200 years. Each civilizationãs unique housing designs, whether igloos, wooden lodges or adobe pueblos, sprang from the resources people groups had on hand. This is in stark contrast to our modern-day dwellings, which have become increasingly specialized, modernized and industrialized. Likewise, the connection we have with the process of creating our homes has become thinner, weaker and less valuable.

The book Building Green (Lark Books, 2005), by Clarke Snell and Tim Callahan, begins with the idea that the functions of a house serve the same functions that our bodies provide for our spirits:

If you are considering natural building, cob is about as natural as you can get, and your can source the materials right from your own property.

Cob is considered by many to be the oldest natural-building style because itãs quite literally made of mud. In the 13th century, cob building began in England and increased in later centuries wherever other materials, such as trees and stones, were scarce. In the article ãCob Building, Ancient and Modern,ã from the book The Art of Natural Building (New Society Publishers, 2015), Michael G. Smith explains that in 18th century England and Wales, ãmany cob cottages were built by poor tenant farmers and laborers who often worked cooperatively. A team of a few men, working together one day a week, could complete a house in one season.ã

Much of the traditional wisdom of building with cob died away with the Industrial Revolution. A century later, an interest in preserving historical buildings led to a resurgence of the craft in England. Meanwhile, a parallel cob renaissance took off in the United States. Oregon cob, the name given the system developed by Cob Cottage Company in western Oregon, holds up well in a cold, wet climate, as did the British version. Additionally, Oregon cob developers further honed the techniques to make it more seismically sound, to protect homes from earthquakes and other natural disasters.

Cob is any mixture of soil, consisting of sand or clay, with straw and water mixed in. Itãs applied wet and dries hard. The word ãcobã is an Old English word for loaf. Loaves of cob were traditionally formed and transported to the building site, often along a line of workers passing it hand-to-hand. The craft of making the loaves and either sun- or kiln-baking them is comparable the common brick.

Adobe is very similar to cob, though adobe bricks are kept in their loaf-like forms and stacked as masonry. Some large-scale, multi-story buildings in the Middle East are called ãmonolithic adobe,ã refering to the integration of the loaves and layers of cob (or ãliftsã) that must be smoothed together. A tool called a ãcobberãs thumbã is a wooden device used to fill in joints and create a cohesive bond between lifts.

Who Should Build With Cob?

Cob is incredibly versatile as a building material and can be combined with other forms, such as straw bale, timber and rock. Because itãs sticky, holds parts together and fills in gaps, Smith calls cob ãthe duct tape of natural building.ã

Victorian mansions and the towers of mosques display cobãs finer appeal. The beauty of cob is its versatilityãit is free-form and can be carved into intricate patterns, molded into shelves and benches and artfully frame stained glass.

On the scale of insulation and mass, straw bale is most insulative, followed by straw-clay, then woodchip-clay. Wattle and daub crosses into more mass than insulation, and finally, cob and adobe block are the least insulative and hold the most mass.

Ziggy Liloia of The Year of Mudô natural-building team discovered this fact for himself when he built his first cob home. After attempting to retrofit his floor with extra insulation, he concluded that northeastern Missouri is just too darn cold for a cob house. He compares it to heating a fridge. Gobcobatron, Liloiaãs compact and elegant home with 2-foot-thick walls froze his toes all winter. The massive walls absorbed the ambient temperature on the outside because the majority of the surface area was exposed to the cold, while the temperature of the interior walls couldnãt hold enough heat from their wood-fired stove to battle the outer air.

The lesson learned, and confirmed by other natural building authorities, is that cob is best suited for hot, dry climates. However, its history of use in cool, damp European countries contradicts this. Cob does not melt into a muddy mess when it rains. It is more like terra cotta pottery that absorbs and releases moisture. Snell and Callahan write about this in Building Green:

ãBuilding roofs with good overhangs, lifting cob off the ground, and covering it with protective plaster can shield cob from rain and make it durable.ã

How Do You Build With Cob?

ãUsing very few tools and no formwork, you make some thick, sticky mud and pile it up,ã Snell and Callahan write, though this may be an oversimplified explanation for building with cob. Cob-building is simple, but a thoughtful design is always the starting point.

As with any building project, your observation skills are your best tools. Start by watching, thinking and learning as much as you can about your site at all times of the year and in all weather extremes. Noting sun position, wind direction, shade, water flow and especially soil type is a permaculture beginner step. Some people observe their site for many years before sketching a design or sinking a shovel into the earth.

Cobãs versatility lends itself to natural, flowing design. Imagine a home without straight lines, built in a spiraling, curvy form rather than boxes and rectangles. Built-in shelves, benches, archways, rounded windows and fireplaces are beautiful and functional features often included in cob homes.

After creating your design, you will need to assemble a team. Mud-building is a group effort, springing from cultures who banded together for common good, many hands making light work. Natural-building workshops bring together folks who are interested in gaining hands-on experience, and often will volunteer or even pay to participate. On the other hand, if you try to do it alone, consider that cob is likely the most physically demanding and time consuming natural building system.

Cob-building requires several more steps before you get to play in the mud. Cob itself does not provide the structural integrity of the home. You will need to frame it out. Various methods of framing exist and should be explored thoroughly and thoughtfully. After getting your walls, doorways, plumbing, electrical lines and windows mapped and framed, then cob can fill in the spaces.

The actual consistency of the cob mud will depend on your site and available resources. A good starting point is to use just enough clay and water to hold sand together and add as much straw as you can. A general ratio of 75 percent sand and 25 percent clay is recommended. When wet, tiny particles of clay expand and adhere to sand and straw, binding it together and locking it into place as it dries.

Donãt waste your valuable topsoil in the mix. Humus or organic matter will continue decaying in the walls, which could create cracks and attract insects. Pebbles or gravel will not help and are abrasive to the hands and feet working the mix. Silt particles are not useful either. If you are trying to use the soil of your own land, you may need to amend it by adding sand or clay.

The process of experimenting with your mix to find the perfect ratios can be a long and playful endeavor. Document your variations like a scientist, adding and removing variables such as drying time, relative humidity and percentages of the various ingredients. Spending the time to get this part just right will reduce frustration later. The clay will work best if soaked before mixing, and the mixing can be done with power tools or multiple hands and feet. Ideally, the end result is a mix that resists being tugged apart; the mud should stick to the straw and not crumble.

Once youãve concocted the right mix, calculate the volume you will need for all the walls and order materials accordingly. Think about all the various uses for the sand, straw and clay and whether other parts of the building process will use them. Know where you will store them for several months without getting wet.

Likewise, you can experiment with various techniques for laying the cob. The basic idea is to integrate the loaves into a single mass. Timing is important in smoothing together the cob as you build up the walls. The cob must be wet enough to be worked, yet too much weight added all at once can cause the wall to slump. Drying time will depend on the weather conditions; if the bricks are too dry, they become unworkable.

Often, cob walls are intentionally wider at the base than the top. The tapering strengthens load-bearing walls, such as ones that support the roof. The interior walls can become an artistsã gallery of craftsmanship, where niches, bottle-glass windows and cubby holes add charm. However, these are fairly permanent, and adding shelves later is impractical.

Learn Before You Build

Cobãs history, versatility and accessibility make it a fun and physical choice as a natural building material for beginners. However, as with any construction job, make sure to get some professional advice. Itãs a good idea to have a professional engineer involved and check into building permits before going too far into the project. The network of natural builders is vast, strong and growing.

To find a hands-on natural-building workshop near you, check out workshops offered by the Cob Cottage Companyô and The Year Of Mud. Both of these sites provide links to great resources specific to your region and climate.

Building with natural materials can plug you back into the rhythms of the natural world. While you create your own natural habitat, youãll also build your appreciation for the natural resources you reshape into your shelter.