How to Build a Compost Bin with Straw Bales

Place a temporary compost bin made of straw or hay on top of the garden for an easy-to-transport, no-waste composting system. 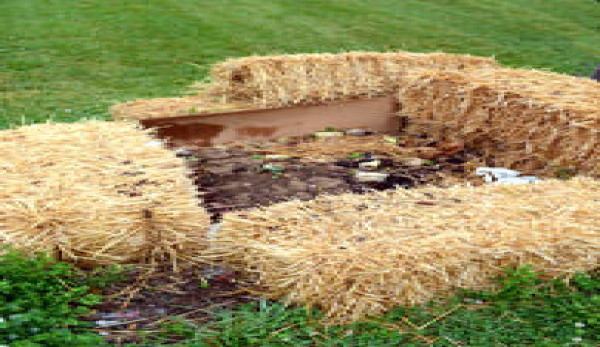 The benefits of incorporating hay or straw into your compost bin are numerous: It can be used to create a large amount of compost quickly, it serves as a carbon (brown) ingredient, and itâ€™s an abundant organic resource on farms thats can be applied both before and after useâ€”think livestock feed-spoilage waste and old bedding. Just as this resource has its place in the compost pile, it also serves well outside your pile as the material for your compost bin walls.

A straw-bale compost bin is easy to build, is quick to expand or downsize, and helps maintain moisture and heat in the compost pile while allowing for air circulation. Because straw is compostable, your straw-bale walls will begin to decompose with the pile. Once the pile has cooked for awhile, you can actually dismantle and mix the bales into the compost for a zero-waste, temporary compost bin. (Keep in mind, the straw-bale walls will sag, lose stability and appear unkempt in the process.)

Select Compost Bin Material
In addition to straw bales, such as pea, wheat and oat straws, you can useÂ hay and alfalfa bales for your compost bin walls. Hay bales might contain weed seeds that can survive low-temperature composting, so take that into consideration when using hay in your compost. P. Allen Smith, professional gardener and host of “P. Allen Smith Gardensâ€ť on public television, also warns against using pine straw: “Pine straw wonâ€™t work because it sheds water and is slow to break down.â€ť

Consider the weight of the bales when making your selectionâ€”they can weigh 50 pounds or more, and hay is often more dense and heavy than straw. Depending on your design, you may need to lift them more than 2 feet high to add a second row to your bin, and youâ€™ll need the strength to move the bales safely.

Locate Compost Bin Site
Before you begin building, site your straw-bale compost bin to take advantage of the sunâ€™s heat. According to the Urban Food Gardenâ€™s “Straw Compost Bins,â€ť you should avoid building on couch grass because the grass will grow into the straw bale, becoming nearly impossible to remove. If appearance isnâ€™t a concern, consider placing your compost bin on a future garden-bed site. Work the decomposing straw into your compost; then work the finished compost into your garden bed to improve soil tilth and fertility. When youâ€™re ready to plant, thereâ€™s no need to cart compost to the garden, and your soil will be primed for planting.

Size Your Compost Bin
According to the Pennsylvania Department of Environmental Protectionâ€™s “How to Make Compostâ€ť fact sheet, your compost pile should measure no less than 4 square feetâ€”a smaller composting area doesnâ€™t typically decompose properly. The bin height should not exceed 6 feet to avoid compaction and lack of oxygen from too much weight; plus, any taller could be unstable if not properly situated and supported. Choose your size according to the guide below. If you have:

Build Your Compost Bin
Follow these steps to build a nine-bale compost bin:

Step 1: Build the base.
Place six straw balesâ€”two bales end to end on opposing sides and one perpendicular to the two-bale walls on each sideâ€”to form a box with an interior of approximately 4 square feet. (If you want easy access to turn your pile frequently, leave one side of the bin open; however, if you opt for slower, no-turn compost, build an enclosed bin.)

Step 2: Add a second layer.
Add three bales along the back side so that each bale overlaps the seams of the base bales, forming a brick-work pattern that enables the outer two bales to wrap around the corners and reach half-way to the front of the bin.

Step 3: Fill with waste.
Layer yard waste and uncooked produce scraps with soil in the bin. Wait four to six months for compost to break down, maintaining an internal temperature of 140 to 160 degrees F at the pileâ€™s center.

Cover the pile with black plastic to increase water retention during dry periods and prevent nutrient depletion from rainwater runoff. Donâ€™t overwater your pileâ€”it can lead to compaction, oxygen depletion, odors and poor decomposition. If your pile starts to smell, turn itâ€”itâ€™s probably too wet and needs oxygen: Turning the pile will help speed the decomposition and manage odors. If you have chickens, allow them to graze your compost for tasty bugsâ€”theyâ€™ll turn your pile and fertilize it in the process.

Step 4: Spread compost.
Cut and remove bailing twine, mixing the semi-composted bales into the compost. Spread it on your garden as composted mulch, or allow it to “cookâ€ť an additional two to three months for finished compost.