How To Build A Raised Bed For Your New Garden

Want to start a garden but unsure about digging up the yard? Build a raised bed following these instructions for a bountiful backyard harvest! 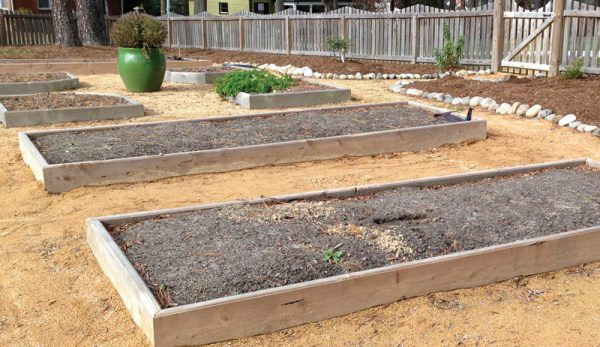 The first thing I learned about home gardening was probably the importance of growing in a raised bed.

As I helped a buddy spread old sawdust and shape up some beds, he taught me the primary reason for gardening this way. In a cold, wet spring, the excess rain would drain out from the raised bed more quickly and spare the vegetables from drowning.

However, raised beds aren‚Äôt the answer for every gardener. In dry climates such as the southwestern U.S., for instance, Native American farmers planted vegetables in beds slightly dug out below the natural soil level. This way, the beds gather more of the rare rainwater and reduce the need for irrigation.

What’s the difference between a Permabed and a raised bed? Here’s the answer.

In climates that aren‚Äôt as rainy as northwestern Europe and the Pacific Northwest‚Äîsuch as the plains, Midwest and eastern states‚Äîraised beds are beneficial during cool, rainy months and during summer downpours.

But during summer dry spells, that quick drainage demands a bit more attention to irrigation and mulching to keep soil moisture levels steady.

But let‚Äôs be honest. Part of the reason we have raised beds is because they can add structure and beauty to the garden. Having a neat edge gives us a sense of the garden being under control ‚Ä¶ even as the weeds are getting away from us.

However, it isn‚Äôt absolutely necessary to define a raised bed with lumber. Simply tossing soil from the pathways onto the beds raises them up enough to make a difference. The first raised beds I made for myself were that style.

But because they were about 2 feet wide and 6 feet long, they did resemble burial plots in a cemetery. So, since I acquired basic carpentry skills, I‚Äôve built raised beds with a more permanent and less funereal look.

You have choices of wood for building raised beds. You could scavenge pine lumber from a construction site or a house demolition. That would be the cheapest way to go.

But if the wood isn‚Äôt rot-resistant, termites and fungi will slowly dismantle your beds. So in about five years‚Äîsooner in high rainfall, later in a dry climate‚Äîyou‚Äôll have to start over and rebuild the beds.

You could also build them with wood that is naturally rot-resistant: eastern or western red cedar, redwood, cypress or black locust. The heartwood of these trees could last 20 years or more.

But if the lumber is cut from the sapwood of the tree, it won‚Äôt last much longer than salvaged pine boards. Only the darker, denser heartwood of these trees is truly rot-resistant.

So, yes, that lovely smell of heartwood cedar is the ‚Äúpoop‚Äù from the sapwood of cedar.

Unfortunately, planks of these rot-resistant heartwoods aren‚Äôt available everywhere. You might need to search lumberyards or high-end lumber suppliers. Even if you can find these planks, they can be pricey.

A more common type that costs less and lasts longer than naturally rot-resistant lumber is pressure-treated wood. Gardeners once rightly shied away from this wood because it was infused with toxic chemicals such as arsenic and chromium.

However, that hasn‚Äôt been the case for almost 20 years.

The Environmental Protection Agency pressed lumberyards to switch to a mixture of copper. That’s the same material most water pipes are safely made from and the same product used in kitchen countertop cleaners such as Formula 409.

I believe that is plenty safe for using in garden structures.

You can extend your growing season with a raised bed high tunnel.

The standard width of a raised bed is 4 feet. Any wider and the average gardener can‚Äôt reach the center of the bed while standing in the path.

While 4 feet is standard, 3 feet is fine for gardeners without as much reach.

Most often, the bed length is determined by the length of planks a gardener can buy or safely handle. The smallest bed I recommend is a square made from four 2-by-4s, each 4 feet long.

But the size I recommend most often is a bed made of 2-by-8s that is 4 feet wide and 8 feet long. That way, each bed can be made from three 8-foot-long 2-by-8s.

With one 8-footer cut in half, you get the two 4-footers you need for each end of the bed. I like this size because the proportions look right. The planks even fit nicely in a small pickup truck.

You can grow a lot of vegetables in 32 square feet. And the depth lets you add lots of topsoil or compost and mulch while keeping a neat edge.

Basic carpentry tools will get the job done.

Now that your bed has been raised, plant it up.

Schools, restaurants and churches everywhere are starting their own vegetable gardens. Hostels, too‚Äîwell, at least one anyway.

Hostels are like hotels but cheaper because they have bunk beds and shared rooms. They are common in Europe but rare in the U.S. outside of the bigger cities.

In an older neighborhood of Charleston, S.C., the manager at the cleverly named NotSo Hostel hostel wanted my help siting a vegetable garden on its mostly shady property. All the spots we initially looked at were under big trees or too close to tall buildings.

Because sunlight is food for plants, putting a vegetable garden in any of these shady spots meant the plants might live, but they wouldn‚Äôt thrive. It looked unlikely the hostel‚Äôs land could sustain a vegetable garden.

The only sunny spot was the gravel parking lot. I proposed sacrificing one of the 11 angled spaces for a proper vegetable garden.

After her initial shock, the manager came around to the idea. She even thought that the necessary rhomboid shape of the bed would suit the unconventional character of the hostel.

On that visit, I didn‚Äôt have enough time to make the garden, so the manager and her staff used scrap wood planks to build the bed and filled it 10-inches deep with rich topsoil.

Vegetable roots only travel down about 6 inches, so they couldn‚Äôt reach any petroleum products that might have leaked into the gravel parking lot.

The hostel staff grew lots of tomatoes, herbs, greens and other vegetables there for several years. But in that time, the pine planks had begun to rot away and needed replacing.

To get the hostel‚Äôs raised bed back into shape, I brought in some treated 2-by-10s to wrap around the decomposing planks. This new bed will easily last three or four decades.

I then topped those new planks with treated 2-by-6s that made a flat area where gardeners could sit while tending the garden. To give the bed an attractive look evoking the 19th century hostel buildings, I mitered all the corners (picture-frame corners are mitered, for example) and used a router to smooth over the edges.

So what if the bed isn‚Äôt square?! It‚Äôs deep, durable, sunny and ready to grow. Plus, it‚Äôs a model for parking lots everywhere.