How to Build a Trellis

Several years ago, I built a trellis for a clematis in our front garden. We quickly established that that I had built it too small. 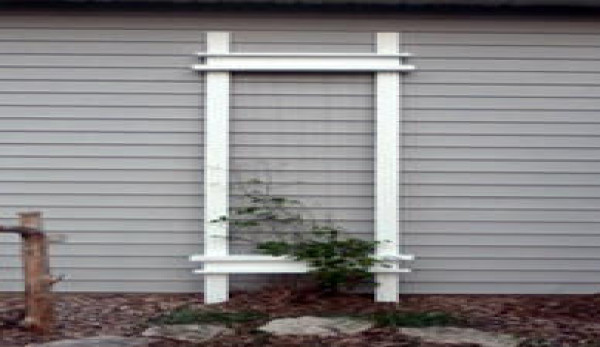 Several years ago, I built a trellis for a clematis in our front garden. We quickly established that that I had built it too small. As the mature plant sent runners well past and to either side of the old trellis, it was clearly time to build a bigger trellis.

My wife found a simple trellis design in a gardening magazine and brought it to my attention. “You cut, and I’ll paint,” was her admonition, so I did. The two 8-foot 2×4 uprights of the trellis were easy to erectâ€”no cuts to the wood were needed. Two of the 30-inch-long 2×4 crosspieces at the top and bottom of the trellis were cut and notched to fit over the uprights, while the third 30-inch-long piece was a simple spacer board laid between the notched pieces.

Three coats of paint later, the pieces were assembled. We found the notching added significant stability to the entire trellis, while the spacer board in between added mostly style so we opted to remove it.

Until this point, we’d used about every kind of material for trellised plants to adhere to. These trellising plans called for copper wire, but we settled for stainless-steel wire. Standard nails tacked into place on the backside of the tall, broad, open section of the trellis created scaffolding for the wire. It was quick work.

I wanted the uprights free of dirt, so I sliced off a couple of 18-inch sections of rebar, heated ends on each with a torch and bent them in tight “L” shapes. I then attached them upside down to the ends of the trellis uprights using conduit fasteners.

A few minutes later, the rebar feet were pushed into the ground with the top end of the trellis leaning against the side of the garage. An early spring had released new growth, and vine tendrils were searching for something to climb. Now, only a few weeks later, the vines are within striking distance of the top of the trellis. It may be time to start building a new trellis for next year!