How To Capture A Bee Swarm

If your bees are moving out to bigger digs, guide the swarm back to a roomier hive. 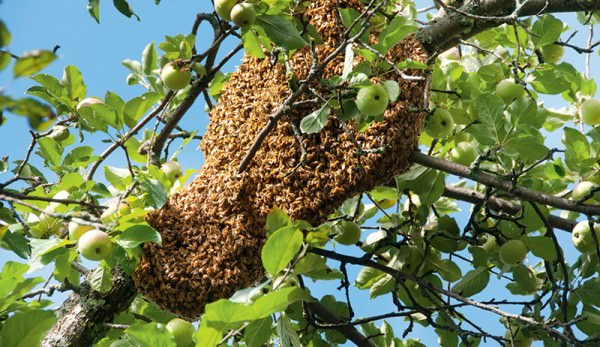 Techniques and technology may come and go, but some things never change. When bees swarm, beekeepers can capture them, but speed and safety is essential.

Swarming is a natural event that usually takes place in the late spring or early summer. During a swarm, the queen and about half the colony‚Äôs population take flight in search of a new home. The remaining bees raise a new queen.

Bees swarm for a couple of reasons, but one main reason is that the bees sense that the hive is becoming overcrowded. Swarms aren‚Äôt ideal for beekeepers, as the loss of 50 percent of a hive‚Äôs population equates to a major loss of honey potential, not to mention the extra time needed to replace the swarmed bees, so it‚Äôs important for beekeepers to expand their hives as needed to head off the swarming instinct. That said, just about every beekeeper has experienced a swarm, so if it happens to you, don‚Äôt blame yourself. Instead, consider catching it.

Capturing swarmed bees may sound impossible (how will you find them?), but it‚Äôs actually not as difficult as it sounds. When the swarm first occurs, the bees generally go only a short distance before landing on something and regrouping into a cluster. This cluster will remain for a few hours and sometimes up to a few days until the scout bees locate a new and desirable place to move permanently. It‚Äôs during this brief time while the bees are clustered that capture is possible.

To begin with, you‚Äôll have to be fortunate enough to spot and recognize bees that are swarming. What you see will depend on how early you catch the bees in the act. During the first stages of the swarm, a large number of bees will be circling in a large area; there will be a lot of noise and plenty of organized chaos. The swarm will slowly condense and eventually land on a temporary resting place. If you come in late to a swarm, you may only see the final cluster of resting bees, usually on a tree branch or other elevated location.

Step 2: Prepare For The Catch

Spread out the light-colored sheet or blanket on the ground near the cluster, and then analyze where the swarm is and how it is behaving. Are there still a lot of bees flying around, or have they pretty much settled into a cluster? Are they on an object like a branch that you can easily shake, or are they on something more substantial, such as a fence post, where you‚Äôll need to remove them with a brush? If they‚Äôre in a tree, can you safely reach the branch? Do you need to prune or cut away any branches?

Once you‚Äôve analyzed the situation, gently spray the bees with a few squirts of sugar syrup. This will help the bees clump together as you try to move them. If the cluster has settled on a flexible branch, simply get the open cardboard box as close to the cluster as possible and directly under it. You can also remove the branch with your pruning shears or saw if needed. Give the branch a vigorous shake/snap if necessary.

With luck, the majority of the bees will fall straight into the box. If the cluster is on a stationary object, you‚Äôll have to do your best with your bee brush to gently encourage the cluster into the box. In either case, no matter how well you do, there will always be a fair number of stragglers, and you‚Äôll quickly find yourself surrounded by flying bees. Try not to be bothered by this, and stay focused.

Immediately place your box full of bees on the nearby white sheet, leave the top slightly ajar (for an opening), then step back and watch what happens. With luck, the queen will be inside with the main cluster. If so, most of the stray bees find their way to the box over the next several minutes. You may see some of the bees on the box releasing the homing pheromone. The white sheet helps them from getting lost. If the queen somehow did not get in the box, you‚Äôll likely see the bees attempting to return to the original cluster location.

Re-home the swarm into an empty hive, in essentially the same way you would normally install a package of bees.

A more passive method for catching a swarm is to use a swarm trap or lure to entice a swarm to move into your equipment. There are various swarm baits that mimic the specific bee pheromones that will attract the scout bees from a swarm. You can purchase these from bee-supply companies or find a recipe to make your own. With luck and patience, you may find swarms moving into your bait hives during swarming season, providing you with free bees for very little effort.

The bees in the swarm will likely be in a fairly nonaggressive mood, as they aren‚Äôt really in a protect-the-hive-and-honey mindset. That said, you‚Äôll still want to wear your bee suit while capturing the swarm, because even in the best scenario, there will still be plenty of loose bees circling you and you never know what will happen. The suit and veil should also give you added confidence and a better ability to concentrate.

There will be many instances where the cluster is either unreachable or unsafe to attempt to capture. It‚Äôs never worth trying to capture a swarm that is on or near electrical poles or beyond the safe reach of your ladder. Only attempt to catch a swarm if it is safe to do so, and never climb or reach too high; it‚Äôs not worth it.

Be extra cautious if the swarm did not originate from one of your own hives. When a swarm is not your own, you have no way of knowing the aggressiveness of the bees.

This article was written by Daniel Johnson, along with his sister Samantha Johnson.

This article originally appeared in the March/April issue of¬ÝHobby Farms.