How To Control Flea Beetles In The Garden

Flea beetles are one of the most annoying garden pests, but with a little effort, managing their numbers is possible. 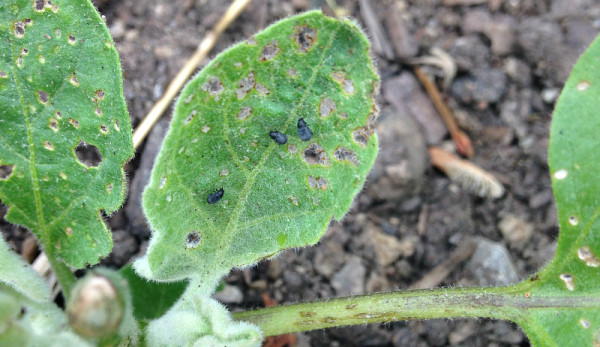 Flea beetles are obnoxious little pests of eggplants, radishes and other garden plants. They may be small, but they can cause big problems. To make matters worse, controlling flea beetles isn’t always easy.

What Are Flea Beetles?

These itty, bitty members of the beetle family measure a mere 1/10 inch long. They’re typically shiny black or brown as adults, and they can be found hopping around plants like a flea. There are many different species of this pest, but they all look very much alike and cause similar damage patterns on plants.

Flea beetles are quick, so spotting the insects themselves can be tricky. It’s often easier to look for their distinctive damage to get a proper ID on this pest. The tiny holes their feeding leaves behind make the plant look like it’s been riddled with miniature buckshot. While eggplants and radishes are favorites, flea beetles also feed on the foliage of tomatoes, potatoes, corn, turnips and some cole crops.

Mature plants can sustain a good bit of feeding damage from flea beetles without any issues, but young seedlings can be stunted and may even die when flea beetle feeding levels are high. Because the plants are most susceptible while they’re young, protecting the seedlings until they reach maturity is key to keeping this pest in check.

Because flea beetles overwinter as adults in garden debris, keeping the veggie patch clean is important. When the adult beetles awake in the spring, they’re hungry. Plant an early spring trap crop to keep them off desirable vegetable plants. Plant a row of radishes or mustard greens on the outer periphery of the garden very early in the season to lure the adult beetles away from newly planted eggplants and tomatoes later in the season. The adult beetles will also lay eggs in this trap area, instead of around desirable plants.

As larvae, flea beetles live underground. These tiny larvae live in the top layer of soil and feed on the roots of host plants. Because the adults are so fast-moving, controlling flea beetles is often more successful when these pests are in their larvae stage. Beneficial nematodes (Heterorhabditis bacteriophora) added to the soil in early summer helps control future generations of this pest. These beneficial nematodes are living organisms that target larvae of flea beetles. They’re generally applied by mixing the nematodes with water (they come in granular form) and watering the soil, leading them to burrow down and attack the young flea beetles.

Row covers can also be an effective way of controlling flea beetles, but care has to be taken to ensure that you aren’t trapping newly emerged adult beetles underneath the fabric. The fabric must be removed when the plants come into flower if the crop is something that needs to be pollinated.

There are also several organic insecticides labeled for use against flea beetles, including spinosad-based products, pyrethrins and neem. Yellow sticky traps placed around and in between plants also work to trap the adult beetles.

Flea beetles are one of the most annoying garden pests, but with a little effort, managing their numbers is possible.

Horticulturist Jessica Walliser is an award-winning radio host on KDKA Radio‚Äôs ‚ÄúThe Organic Gardeners‚ÄĚ in Pittsburgh. She‚Äôs the author of five gardening books, including the Amazon-bestseller Good Bug Bad Bug, winner of the 2014 AHS Book Award Attracting Beneficial Bugs to Your Garden: A Natural Approach to Pest Control, and her newest title Container Gardening Complete: Creative Projects for Growing Vegetables and Flowers in Small Spaces. Jessica also writes two weekly gardening columns for the Pittsburgh Tribune-Review and is co-owner of the website SavvyGardening.com.