How to Control Flies on the Farm

A combination of farm-management techniques and fly-control products can help reduce fly populations on your farm. 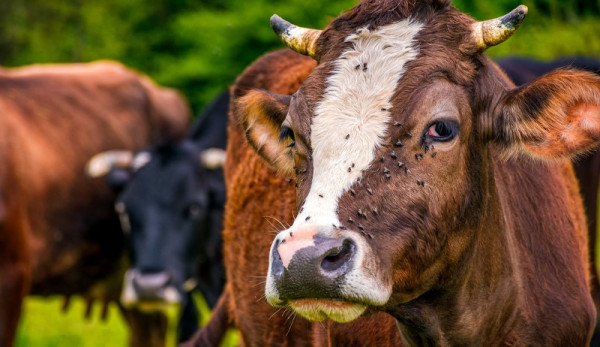 When you think of perennials, you probably envision flowers rather than flies, yet both appear with the onset of outdoor warmth and moisture. If you raise farm animals on your property and consider flies a pesky nuisance in the natural order of things, prepare yourself for the onslaught. Left to their own grubby biological imperative, fly populations expand exponentially until every creature on the farm is rubbing its eyes and stamping its feet.

While an array of fly species exists, harassing man and beast alike, two are most problematic to small-farm owners: the common housefly and the stable fly. Houseflies are nonbiting insects that carry diseases and parasites; stable flies are bloodsucking tormentors. Fly control is similar to weight management in that keeping the numbers down from the outset is far better than having to reduce them after theyâ€™re established. Because both species reproduce in warm, damp environments, eliminating those types of favorable conditions is the first step toward keeping their numbers in check.

Allowing hordes of flies to infest your property will cost you money in decreased output from dairy animals, reduced weight on young feeder stock, considerable expenditures for spray repellents, and expensive vet bills from eye and wound infections. The continual foot stamping of your hooved animals results in cracks and chips that often require farrier attention.

Swarming, biting flies make barn chores more unpleasant, grooming animals an exercise in spraying and swatting, and summer shorts out of the question. Itâ€™s also no joy ride when horses are harassed by biting flies, causing their behavior to deteriorate the longer theyâ€™re exposed to the nuisance. Spray repellent, fly masks and leg wraps help reduce contact but are not a solution.

In the barn, fly-dirt left behind on virtually every surface is ugly, unsanitary and difficult to remove. Without regular cleaning, your windows will sport a brown haze. Perhaps worse from a property-value standpoint, an overabundance of flies on a farm located near a neighborhood of nonfarmers often causes disputes that end up at county board meetings or encourages irritated neighbors to become extremely interested in zoning regulations. This could affect you if you have enough land to subdivide.

Obviously, manure piles are prime breeding grounds, but you should also clear areas of all animal droppingsâ€”livestock or otherwiseâ€”remove any debris in the corners of feed troughs, and discard damp hay beneath mangers, wet bedding and other decaying organic matter. Exposing this detritus to the sun and wind by thinly spreading it on your fields is a practical method to reduce the fly population while simultaneously improving pasture soil.

Your manure pile should always be placed close enough to your barn for access, yet far enough away to keep flies from swarming the premises. Regular removal of the pile should be part of your farm-management routine.

In addition to keeping your barn as clean and dry as possible, you can buy a number of products to get a handle on fly populations in your buildings and around your farm.

The most time-honored product is fly paper hung in strategic spots; however, several drawbacks might steer you toward other fly-control options. Fly paper hanging above your head with thousands of victims stuck to it is unsightly and eventually has to be removedâ€”an unpleasant task.

Trapsâ€”plastic containers with bait inside to lure flies to their doomâ€”are the slightly evolved version of fly paper. While effective, full traps can be ugly and smelly.

A more modern approach is to install portable fly-spray mist devices above your stalls or wherever your animals congregate, such as in run-in shelters or small sheds. These delivery systems work by shooting a fine mist of insecticide into the air every 15 minutes. The housing with the battery-run timer plus 30-day replacement canisters of insecticide are relatively inexpensive and sold in farm-supply stores. These products have been tested and proven safe for use near livestock and farm pets.

Releasing flying insects on your farm to get rid of flies might seem counterintuitive, but itâ€™s a natural, environmentally friendly means to eliminate the types of flies that cause the most harm around your barn. Fly predators, aka parasitoids, are smaller than their foes and resemble ants with wings. Their sole purpose is to stop the reproductive cycles of house and stable flies. Various suppliers sell fly predators, but because several species are available, itâ€™s important to buy those that are effective in your region. Your supplierâ€™s customer-support representatives can help you determine what type and how many you need. Some suppliers, including Spalding Laboratories, offer an online calculator to help determine your fly-control needs, as well.

Releasing fly predators should be part of an ongoing program that you combine with manure removal and premise spraying. Fly predators do not kill adult flies, so you must eliminate them with insecticides. Spray insecticides well away from the breeding areas where youâ€™ve released the fly predators so as not to diminish their population in the process.

A variety of aerosol sprays can be used to treat your barn. Some products are designed to stick to surfaces for an extended period of time; others are for more immediate, temporary knock-down action. The problem with residual sprays is theyâ€™re actually more toxic to fly predators than they are to house or stable flies. And, as with most farm chemicals, the “badâ€ť flies build up a resistance to the product. Read the labels of the products you buy to ensure they are not counterproductive to your goal.

A feed-through chemical known as an insect growth regulator disrupts the pupal stage of the fly life cycle. The active ingredient, cyromazine, safely passes through an animalâ€™s digestive system and is excreted in the manure, where it damages the nervous systems of fly larvae. Itâ€™s most often sold in block form, but a word of caution for horses prone to founder or animals that routinely overeat: Chemical blocks are typically molasses-based and not appropriate for every animal. Monitor how the block is being consumed and switch to a mineralized daily supplement if your animals are eating it like candy.

Consider fly management on your farm as a standard chore that lessens in frequency if carried out regularly. No one option eliminates all flies, but a sustained effort using all of the tools at your disposal will significantly reduce them.

This article originally appeared in the March/April 2013 issue of Hobby Farms.

Louann Chaudier and her husband housed horses, goats, wallabies, cats and dogs on Restless Spirit Farm in southern Wisconsin until recently, when they sold the property. They now live on three wooded acres and raise Nigerian Dwarf goats.