How to Control Hornworms

If the leaves on your tomato plants are looking rather sparse, the work of a noshing tomato or tobacco hornworm is likely to blame. 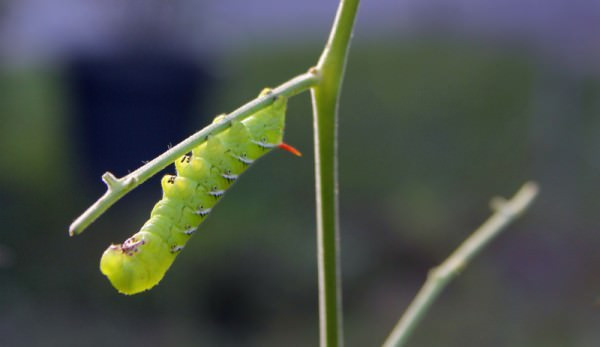 The month of January may seem a little early to start worrying about garden pests, but learning to identify and combat problem insects in the offseason will help prepare you for a successful spring and summer growing season. Today we are going to briefly look at a pair of common large caterpillars regularly found in home gardens: the tomato and tobacco hornworms (Order: Lepidoptera, Family: Sphingidae, Genus: Manduca).

Have you ever walked out into the garden only find that your tomato plant has been partially defoliated? This may be the work a hungry hornworm. These two big caterpillars are easily recognized for their large green bodies that reach nearly 4 inches long when fully grown and feature a large curved horn on their dorsal segment. Theyâ€™re commonly confused, as the only major visual difference between the two is that the tomato hornworm has eight whitish chevron- or v-shaped markings on both sides and the tobacco hornworm has seven white stripes.

The first thing everyone wonders: Is the protruding horn poisonous or does it sting? No, the horn is not poisonous or even sharp. Its function isnâ€™t known, but it might act as a visual deterrent for predators (or gardeners). The dangerous aspect of the hornworm is the massive body size and corresponding large appetite for plants in the nightshade (Solanaceae) family, especially tobacco and tomato crops. Theyâ€™re so well-known for their appetite that their scientific genus Manduca means “devouringâ€ť in Latin. Both hornworms primarily target the leaves, but will also munch on the tomato fruit themselves. 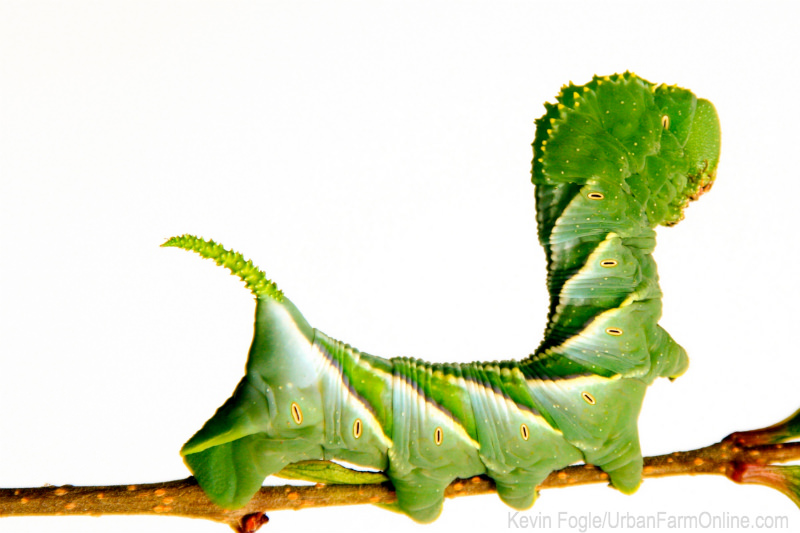 For organic gardeners, the best way to control these pests is by plucking them off plants and drowning them in a bucket of soapy water. However, the trick to removing hornworms is finding them. For such huge caterpillars, they can be very difficult to spot, even if youâ€™re certain theyâ€™re present. Look for the hornwormâ€™s large black dropping (known as frass in entomology speak). Fresh frass means you are close to the caterpillar. Common hiding places include the interior stalk and the undersides of leaves and branches.

If you happen to find a hornworm with a mound of white ovoid cocoons on its back, leave it alone even if itâ€™s consuming your tomato leaves. The cocoons are from a parasitic wasp that lays its eggs under the caterpillar’s skin. When the eggs hatch, they feed on the live caterpillar and spin a series of silken cocoons on the back of the hornworm. The feeding larva will eventually weaken and kill the caterpillar. By leaving one infested caterpillar in your garden, you are helping promote a healthy population of parasitic wasps, which will naturally help keep the hornworms in check.

Additional controls include rototilling or cultivating the soil by hand in the fall to help destroy a large percentage of the overwintering hornworm pupae and decrease their population for next year.