How to Control Raspberry Cane Borers

This pest can wreak havoc on your berry patch if left unattended, but fortunately, control is easy and you can save your berries. 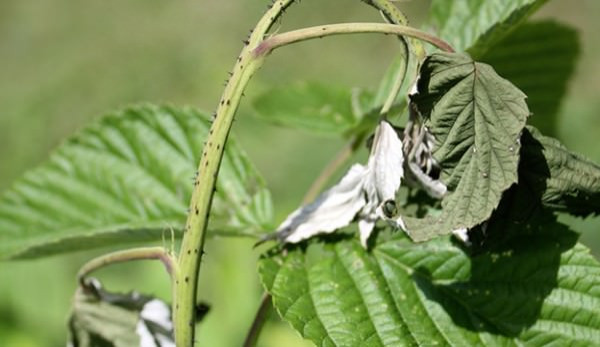 As I was trimming back my raspberry canes last week, I was reminded of an issue I’ve faced in my raspberry patch for the past few years: raspberry cane borers. I initially spotted the distinctive damage of this insect in the summer of 2013, and at first, I was a bit panicked by the wilted stem tips I noticed here and there in my berry patch. However, I’ve since learned not to get too flustered by this pest.

Raspberry cane borers attack blackberry and raspberry plants. The larvae of a 1/2-inch-long, slender, long-horned beetle, the borers initially cause stem tips to wilt during the summer and early autumn.

Their damage is distinctive and appears about 6 inches below the cane’s tip. Look for two rings of punctures that circle the cane and are positioned about a half-inch to an inch apart. These rings form when the adult female beetle begins the egg-laying process in June. After creating the two rings, she lays a single egg in the area between them. The egg hatches in late summer, and the resulting larva tunnels through the cane, girdling the stem tip and causing it to wilt and eventually die. Infested stems will not produce fruit, and as the season progresses, the larva burrows farther down the cane.

The borers over-winter inside the canes, and then travel all the way down to the base of the cane the following spring, causing the entire stem to die before any fruit can mature.

I’ve discovered that controlling raspberry stem borer is best achieved by observing my raspberry patch carefully throughout the summer for the distinctive pair of circular rings below wilted cane tips. When I find one of these egg-laying sites, I prune the infested cane down a few inches below the damage and then toss this damaged stem tip (with the borer still inside) into the trash or the fire pit. If the infestation becomes severeāwhich it seldom doesāyour best bet is to prune all the canes clear back to the ground every fall and burn or discard them. Doing so will get rid of all the borers, but it will also eliminate an early-season berry crop the following year. Eliminating any wild brambles near your raspberry patch will also help cut down on borers, as these plants may also harbor populations of the pest.