How To Deal With Drift And Overspray

You need to be prepared when chemicals sprayed from airplanes onto neighboring farms affect your crops and property. Here's how to stay ready. 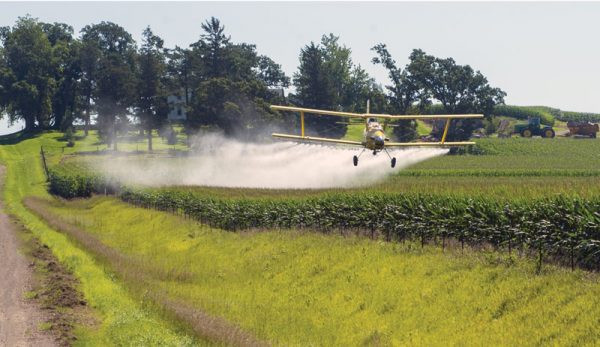 During the past decade, the issues of drift and overspray have intensified. The past few years have seen record numbers for acreage and growers affected. What should a grower do?

First and foremost, you need to evaluate your risk for drift or overspray. Are you downwind from operations that apply pesticides? How much of a buffer zone exists between you and such operations, if any? What types of crops do they grow and chemicals do they use? How might this affect your operation?

Note that your risk level can change quite suddenly. When we first purchased our farm, it was four to five minutes of driving before we met a field of row crops. Cows, woodlands and pastures encircled us for a solid mile or so in all directions. This spring, now just half a mile away, large amounts of pasture were put into row crop production. About 15 minutes from us, 100 or so acres of woodlands were bulldozed, burned and turned into row crops. Even large tracts of land can be converted to row crops, and it can happen quite quickly.

A farm that starts in a protected, isolated space might end up eventually and suddenly encircled by industrial agriculture operations, so just because you are safe today doesn’t mean you will be tomorrow.

If your neighbors donâ€™t or wonâ€™t observe and put in buffers, then you should. Buffers should include plants of many types and heights, creating a thick barrier to catch as much contamination as possible. Locate buildings and growing spaces and take action to minimize exposure and risk.

On a related note, some pesticides degrade plastic. So if you use high tunnels or greenhouses as a barriers or buffers, believing the plants are protected inside the closed structure, you might end up with other problems because plastic and other components fail much sooner than they would otherwise.

While many growers know they are at risk of getting hit, they arenâ€™t adequately prepared when it happens. During spraying season, have a video camera ready. Video and other evidence is crucial to protecting yourself and contributing to victory if legal proceedings become necessary. Take weekly pictures of your growing spaces so that if damage occurs, youâ€™ll have before-and-after evidence. (You should take pictures anyway for marketing and social media purposes.)

Know whom you need to contact if you get hit by drift and overspray. It varies by state. Evidence and samples are time-sensitive; if you get hit, report it and begin collecting evidence immediately. Evidence includes weather reports, eyewitnesses, photos and samples. Also note that evidence isnâ€™t just your plants. Pesticides can land on vehicles, structures and all sorts of other places, so take pictures and get samples of as many spots as possible. Note that bees and animals can be impacted, so include them as well. If you work elsewhere than your farm, you can set up a camera that records during the day, because overspray may happen while you are away.

Some growers stagger their planting to provide some protection/insurance against the unpredictable nature of neighborsâ€™ spraying. By not having everything out at the same time, their overall risk is reduced. Some also have backup plans to purchase replacement plants/starts to get back to growing as quickly as possible after getting hit. If you are at risk, you need to have such plans in place just in case things go wrong.

Getting hit by drift and overspray isnâ€™t easy, but you can minimize your risk and the damage it can do. You can also be prepared to get back on track if it happens.