How To Garden In Acidic Soil

If your garden soil has low pH, use this chance to grow some less common edible plants. 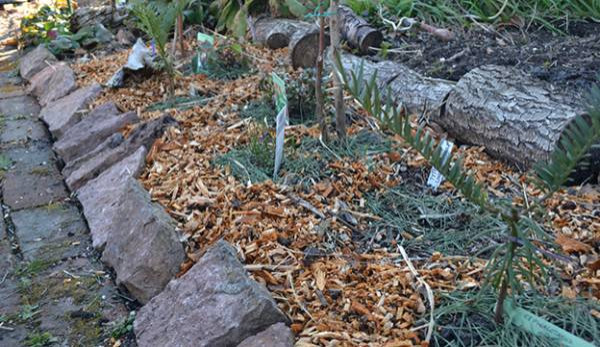 Certain plants are adapted thrive in soils that have an acidic pHâ€”that is, a pH below 7â€”and cultivating them means paying attention to soil chemistry. Often, these plants are called â€śericaceous,â€ť because many of them are, or resemble, members of the widespread Ericaceae family. The prototypical representative of this botanical family is heather (Erica spp.), but it also includes a diversity of other well-known and commercially or horticulturally valuable plants:

More broadly, acid-loving plants are called â€ścalcifuges.â€ť The name, meaning â€śto flee from chalk,â€ť references their intolerance of alkaline or lime-heavy soils, which are full of carbonite.

Acidic soils result from a variety of environmental circumstances. Theyâ€™re often found in areas of high precipitation, for example, because rainwater is slightly acidic and leaching can acidify soil. Areas with an abundance of organic matter, such as heaths, bogs or forests, can also be acidic because the carbon dioxide resulting from decomposition reacts with water to create carbonic acid. Further, acidic soils can be found near certain mineral deposits or under certain plants, like conifers, known to acidify the soil beneath them.

In chemistry terms, acidic soils are characterized by an excess of hydronium and aluminium ions. The chemical makeup of these soils interacts with the nutrient uptake ofâ€”as well as forms of nutrients available toâ€”the plants that grow in them.

Cultivating a sustainable garden of low-pH-loving plants is a matter or understanding these environmental processes on a basic level and recreating them with yearly soil inputs. In horticultural practice, this has typically been accomplished with the use of packaged peat or histosols, which contain partially decayed vegetation and sphagnum moss. A brick of the stuff is typically used to plant landscape favorites, like blueberries and rhododendrons, with top-dressings following in the years after.

Peat, however, is mined unsustainably from delicate biomes that are among the worldâ€™s most important carbon sinks. Sustainable alternatives to peat include:

These carbon-heavy additives also result in a soil that is lower in bioavailable nitrogen because the organisms that decompose carbon use nitrogen in order to break it down. Accordingly, plants that prefer acidic soils also often prefer nitrogen-poor soils, so adding layers of carbon-heavy material year after year will help maintain the soil.

In terms of selecting plants for an acidic garden, there are many options, depending on your climate. As mentioned, plants in the Ericaceae family usually thrive in these kinds of soils, as do most conifers and plants that typically grow in heaths or on forest floors. Looking around in the local biome can give some clues as to which local plants require an acidic soil.

I built a little acidic â€śraised bog gardenâ€ť last year, and focused exclusively on edibles. An edible low-pH garden for USDA zones 4 through 8 can include:

After planting, a garden with acidic soil requires a little attention to soil detail in order to maintain healthy growth. Many of the plants mentioned above are what are called â€śdwarf shrubs,â€ť which are very slow- and low-growing plants that will have a hard time out-competing more aggressive vegetative growth. Keeping the soil nitrogen level low and the acidity high can deter the growth of competitor plants that will crowd or shade out dwarf shrubs.

A basic soil pH and soil nitrogen test kitâ€”either paper strips or a probeâ€”is all that is needed to keep an eye on soil chemistry. These kinds tests are worthwhile in almost every kind of gardenâ€”not just acidic ones. Understanding and maintaining different kinds of soil chemistry in different areas of the garden is one of those skills that can take the health and cohesion of any landscape to the next level.