How To Garden In Drought

Adapt your farm to hotter, dryer conditions with these tips for water-wise gardening. 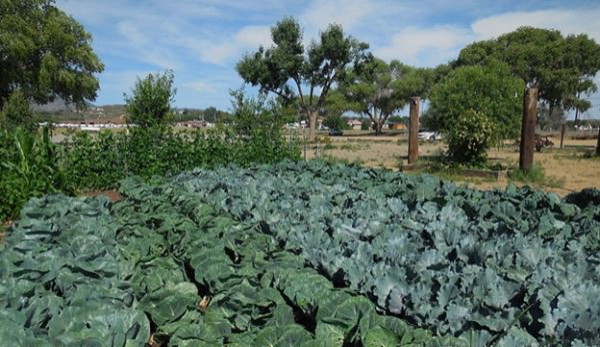 Every day, the news shows examples of our changing climate. Typically cool and wet areas are getting hotter and drier. In New Hampshire, where I live, Iâ€™ve noticed that the winters are colder, the springs are drier and the summers are hotter. The garden needs more water, and the cool-weather spring crops arenâ€™t producing like normal.

Although I canâ€™t change the weather, I can change what I am doing and adapt. To help me come up with a game plan, I reached out to people who know something about gardening in dry conditions. My first contact was with seed company Botanical Interests to find out about seeds and plants. I also jumped on a plane to visit Mortimer Family Farms in Dewey, Ariz., and the people at the Arizona-Sonora Desert Museum in Tucson, Ariz., to see how both Native people farmed in the past and how modern farmers are doing it now. What follows is what I learned.

1. Get Creative With Water 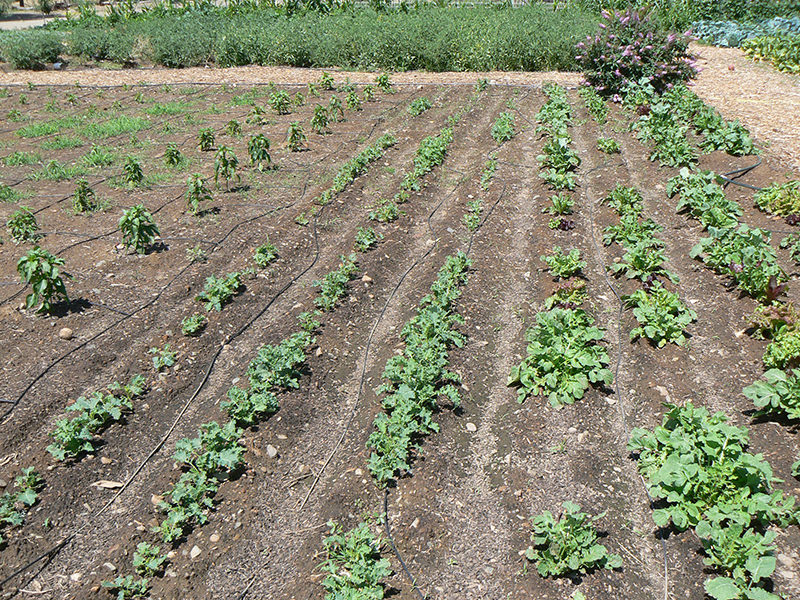 “Water is the key to plant production,â€ť says Andrea Phillips, manager at Mortimer Family Farms. “It is how we manage that water that makes all of the difference.â€ť

Despite being located on a large aquifer, Mortimer Family Farms makes it a priority to conserve water. Not all fields get watered every day and not at the same time. They key to preventing evaporation is irrigating during cooler parts of the day, when the sun isnâ€™t as intense. The farm also utilizes holding ponds, which collect and hold any rainwater, for watering fields.

Native people also understood the importance of water and respected it, according to Jesus Garcia, education director at the Arizona-Sonoran Desert Museum. Many people think that just because people lived in dry, arid conditions that they didnâ€™t need water for crop production, but nothing is further from the truth. What made these desert dwellers different was that they learned to live within the confines the environment.

So how does this translate into usable information that I can use back in New Hampshire? This gave me a much deeper respect for water and the need to conserve it. I donâ€™t have property large enough to have holding ponds, but I can use the next best thing: a cistern or rain barrel. I built a rain barrel from a recycled 55-gallon plastic pickle barrel to catch rainwater and snow runoff that runs off my roof to use to water my garden.

Dry conditions make you look for alternative sources of water. Here in New Hampshire we get very high humidity, but humidity doesnâ€™t always mean rain. At the time of this writing the humidity is sitting at 70 percent. That means I have a dehumidifier running constantly, which takes water from the air and puts into a container. Many people dump this water down the drain, but I use it in my garden or to refill my rain barrel so it can be used later. 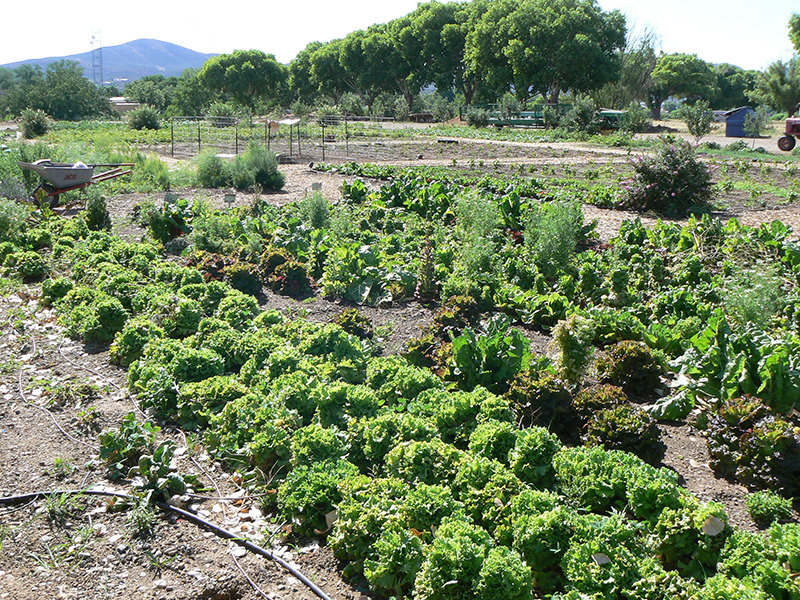 Here in New Hampshire, many people, myself included, like to plant in raised beds or modified raised beds. This technique works well in our area, as it allows the soil to warm up a little earlier than normal in the springâ€”a few days and a few degrees can make a big difference. However, in drier weather, raised beds also make the soil dry out quicker, thus requiring more water. Once again I turned to the people at Mortimer Family Farms to see what they do.

Walking the fields, I could see that they do things differently than I do. They donâ€™t use raised beds: Instead, running along the edges of the fields and between each crop row are shallow trenches. Phillips told me that these trenches are there to facilitate watering and to catch any rain runoff. During watering, it is the trenches that are watered and not the plant directly. Because the trenches are lower they are closer to the plant roots, and when the trenches are filled, the water goes directly to the roots.

I saw something very similar at the Arizona-Sonora Desert Museum. Native people that lived near rivers dug canals and trenches to divert the water to their gardens when they could, but more than likely, they lined stones along the rows, which acted like dams, to catch and hold the rain runoff. This technique of using trenches is something I plan on trying next planting season.

April Shelhon, a horticulturalist at Botanical Interests, told me the very first thing the gardener needs to do is to enable the soil to retain as much moisture as possible by increasing the amount of organic material. She also told me to stay away from raised beds and to water deep but less often, as this will slightly stress the plants and in turn strengthen them. Another technique that Mortimer Family Farm uses is limiting space between plants. This helps shade the soil, which prevents excessive loss of moisture from evaporation. It also helps to keep down weeds. Native people across this country used a similar technique when they planted corn, beans and squash in the same mounds. 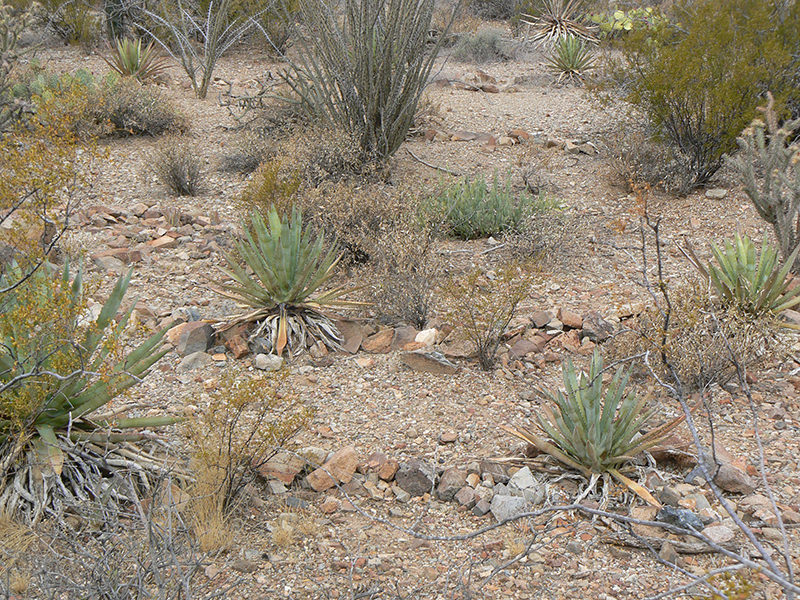 While the desert regions of Arizona are not New Hampshire or Ohio, and most of us are not facing the same conditions as in the Southwest, there are lessons to learn. Iâ€™ve always pushed the idea to plant the crops that perform well in your area, and that still holds true. With that being said, the changing environmental conditions may have us looking at different varieties.

According to Garcia, the Native people of the Sonora Desert region planted corn, beans and squash (aka the Three Sisters), along with wild peppers. All of these plants do well in the heat, with some varieties performing better than others. Everyone has their garden favorites, but open your mind and your palate to varieties more suited to your climate and changing weather patterns. When buying seeds, look at the plant descriptions and choose varieties that are heat tolerant. Shelhon told me most squashes, pumpkins, melons and beans do very well in the heat, though they still need irrigated.

There are so many things that we have no control over, and the best we can do is to adapt to the changing conditions. I learned a great deal from my visit to Arizona and from speaking with people at Mortimer Family Farm, Arizona-Sonora Museum and Botanical Interests. I will be putting some of the lessons into effect next growing season. No matter how much you may think you know, there is always someone out there who knows more, so donâ€™t be afraid to ask for help. Iâ€™m glad I did.

Dana Benner has been writing about all aspects of the outdoors, including farming, for 30 years with his work appearing in both regional and national publications. His farming pieces often reflect the lessons taught by his Native ancestors and all those who came before us.