How To Get Rid Of Corn Earworms

This pest can make a meal out of your summer sweet corn, so take these preventative steps so you get the final bite. 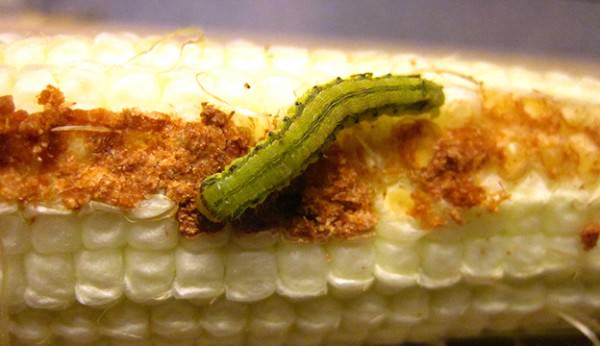 If you’re lucky enough to grow your own sweet corn, you may occasionally find yourself running into corn earworms. This dreaded pest of several crops has a major “ick factor” for sure, and managing it without chemicals can be a challenge. But like all other pests, the first step in combating corn earworms is understanding their lifecycle.

The corn earworm (Heliothis zea), is the larva of a dark-brown or olive-green, night-flying moth. When fully grown, earworm caterpillars are over 1 inch long. These larvae have a creamy yellow or black stripe down their side, and they’re most often found curled into a C-shape and feeding just at the base of the silks on an ear of corn. The same species also feeds on tomatoes, where they’re called tomato fruit worms. On tomatoes, their damage appears as perfectly round holes drilled through the ripe fruits.

Corn earworms are so problematic in the corn patch because not only do the maturing larvae feed on the corn itself, but when the plant is still immature, the newly hatched caterpillars also feed on the leaves and tassels of the plant. We tend to notice them most when we crack open the husk of an ear of corn and discover them hidden inside.

The best way to control corn earworms without resorting to synthetic chemical pesticides is to close the top of the developing ear as soon as the silk begins to develop. You can use a clothespin, a chip clip, or a piece of clear packing tape to hold the top of the husks together. The female moth will lay her eggs on the silks as usual, but the young caterpillars will not be able to gain access the developing silks. You can also apply five drops of corn oil laced with the biological insecticide Bacillus thuringiensis (Bt) to the tip of each ear when the silk begins to brown. Use 3 tablespoons Bt per quart oil. It might seem like a pain to apply the Bt and oil combo, but an oil applicator can make it a little easier.

There’s one final way to send corn earworms packing: Encourage the multitude of parasitic wasp species and tachinid flies that use the corn earworm caterpillars as hosts for their developing young. Invite these parasitoids into the garden by planting lots of flowering herbs and annuals throughout the corn patch, including dill, fennel, sunflowers, cosmos, cilantro, Ammi, and lots of others. Interplant your corn crop with these flowers. You can also purchase Trichogramma wasp eggs from an insectery. They can be released into the corn patch, where they’ll to on to parasitize corn earworm eggs even before they hatch.