How To Get Rid Of Feral Chickens

Wild and free-range chickens are not the same—learn the difference and how to combat a feral chicken problem where you live. 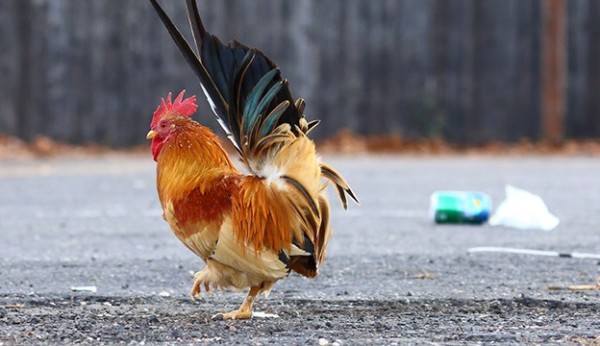 In the California towns of Yuba City and Fair Oaks, wild chickens rule the roost. They crow from street corners, scratch and peck near coffee houses and grocery stores, and they sometimes even cross the road. Townspeople are used to the feral chickens that draw in tourists. The Yuba City chickens have their own Facebook page, and the wild chickens of Fair Oaks inspired the Sacramento County town’s annual Chicken Festival.

Feral chickens aren’t welcome everywhere, but in some places they’re protected. Below, we’ll discuss what they really are, where they come from and how you can you get rid of them.


What Are Feral Chickens?

The word “feral” refers to a creature that is not domesticated, has reverted to wild or exists in a natural state. In most cities, wild-chicken populations hatched from farm escapees. In New Orleans, for example, Hurricane Katrina let loose and set domestic chickens free. Those chickens survived and reproduced. Now, stray chickens are a common sight there.

In the Hawaiian Islands, feral chickens are likely descendants of wild red jungle fowl originating in Southeast Asia thousands of years ago and brought into Hawaii by colonists. The red jungle fowl have interbred with domestic chickens, which may have escaped from breeders’ illegal cock fighting rings. As happened in New Orleans, hurricanes that destroyed pens may also have played a part in the burgeoning feral chicken populations on the islands.

Wild chickens such as flocks that reside near Hollywood, California freeways, may be the result of irresponsible rehoming. There, or elsewhere, people grow tired of their chickens, and let them go. The domestic chickens then reproduce, and soon there’s a growing flock of feral chickens. Animal protection and activist groups may come in to relocate flocks but any that are left behind continue breeding. So numbers of wild chickens increase, and their range widens.
In Fair Oaks and Yuba City , the wild chickens likely hatched from descendants of long-ago farm escapees from the area’s rich agricultural history. People in these cities have taken the wild chickens under wing, but in other places, feral chickens aren’t so welcome.

When Are Feral Chickens A Problem?

Feral chickens are a problem wherever they become a nuisance—in short, many places. Communities of New York, Florida, Oklahoma, Arizona, California, Georgia and Texas have found themselves plagued with feral chickens. Some of the problems and concerns include:

Where there is little natural predation, such as in Bermuda, wild chickens encroach on farmland, damage food crops and cause concern for the spread of disease among other wild birds.

The Difference Between Feral and Free-Range

The difference your neighbor’s free-range chickens and feral chickens is that your neighbor’s chickens are controlled. Keepers are required to follow local laws governing how to keep chickens. Free-ranging may consist of just a few hours of foraging each day, even in urban yards. Then keepers lure them with treats back to the safety of a coop. Just as dog owners cannot let their pets roam and disturb neighbors, chicken owners must act responsibly.

To an extent, domestic chickens’ DNA also differs from that of feral chickens and their wild ancestors. Scientists have found that Kauai, Hawaii’s flourishing wild chicken flocks have retained domestic traits that serve them, such as faster growth rates. But gene variants linked to broodiness trace back to red jungle fowl. Domestic poultry have been bred to leave their eggs in the nest for easy collecting, while red jungle fowl would sit on eggs to protect their young. The wild chickens weigh less, too, which makes them agile—a protection in the wild.

Where To Find Help For Dealing With Wild Chickens

If you’re concerned about feral chickens and want to get rid of them, researching the laws in your area should be your first step. On Kauai, for instance, feral chickens with their red jungle fowl ancestry enjoy protection in natural preserves, so they can’t legally be captured or killed in those places. However, protection doesn’t extend to private property and developed areas where, according to a State of Hawaii website, they’re considered “free-flying domestic chickens.”

Residents often capture and kill feral chickens for the dinner table—the Division of Forestry and Wildlife will even loan out traps. If feral chickens are a problem in your area, check with your state, city and county offices for available assistance.

Check with your local animal control services for help, too. In New Orleans, animal control routinely captures wild chickens when residents complain. They can also offer advice or provide other information.

Online forums for chicken keepers can also be a good resource. People discuss trapping the wild chickens using oatmeal or other treats. Some forum talkers laud feral chickens’ ability to survive harsh conditions without human help, and speculate their resilient genes might be helpful if bred with domestic fowl. Keepers in online discussions hatch plans to gather the eggs of feral chickens and place them under a broody domestic hen—thereby domesticating the wild hatchlings they’ve snatched.

To catch a feral chicken yourself, an online search for “how-to trap wild chickens” nets abundant discussions, trap building guides and lots of chicken-chasing videos. Some people use large nets, corner them or lure them into domestic coops.

Because feral chickens are agile, they can be difficult to catch. Here are a few tips to trap them:

Once trapped, you can take the feral chicken to animal control. Relocating wild chickens, even far away, just makes them a problem for someone else.
You might also look for activist groups in your area that will work to re-home wild chickens. Some groups believe feral chickens are on the increase due to the rise of backyard chicken keeping and irresponsible keepers.

Again, be sure to check with your city, county, and state offices for information about the laws governing your particular area. Don’t inadvertently break laws or you’ll find yourself with egg on your face—and a fine that impacts your wallet.