How To Get Started With Rainwater Collection

Save money and give your plants the best with a rainwater collection system. Not sure where to start? Here are some tips for starting out. 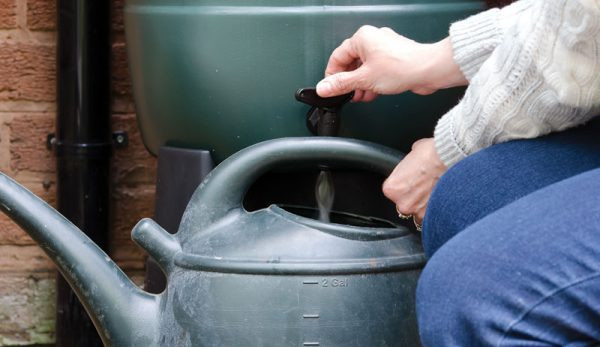 Throwing a rain barrel in here or there used to be a nice-to-have for many gardeners. But as we experience more unpredictable weather patterns (including heavy flooding and more periods of drought) rainwater collection systems are rapidly moving to the need-to-have category. В

It also mitigates topsoil and nutrient loss from your own land.В

Mary Ann Capehart serves as instructional specialist for Water Wise, a program within the University of Arizona Cooperative Extension service. According to Capehart, rainwater is particularly prized for its ability to help flush salts out of the soil.

вҖңGroundwaterвҖ”especially in the WestвҖ”tends to have high salinity,вҖқ she says. Because its naturally high mineral content can make nutrient uptake more difficult for plants, even an occasional watering with rainwater can make a big difference.В

вҖңPlants respond a lot better to rainwater,вҖқ says Jonathan Meier, owner of Rain Brothers, a company in Columbus, Ohio, that specialize in sales and service of everything related to cisterns. вҖңAnd a small-scale rainwater collection system will pay for itself within a season typicallyвҖ”especially if someone is on municipal water.вҖқВ

Read more: Check out this video on building a DIY rain barrel and drip irrigation system!

Meier began selling rain catchment equipment in 2007, and he says 2020 was his best year so far. вҖңPeople were stuck at home and thinking more about backyard conservation or backyard gardens,вҖқ he says.В

Sarah Sojka, vice president of the American Rainwater Catchment Systems Association Foundation board and an associate professor of environmental studies and physics at Randolph College, has noticed an uptick in interest in rainwater collection, too. вҖңWeвҖҷve seen increases in people coming to the [ARCSA] website,вҖқ she says. В

вҖңIt is actually really hard to track how many rainwater harvesting systems there are out there, particularly because they range so dramatically in size from a 100-gallon barrel to 1-million-gallon, underground storage system, or a 1- or 2-million-gallon pond.вҖқВ

If you are in the western U.S., you might already rely on a rain catchment system, but you may need to switch to even larger tank in the coming years. вҖңNormally, we would have a giant monsoon, and you would get as much [rainwater] as you could that one time of year and then save it for the really dry spells,вҖқ Capehart says.

Whether you have a modest rain barrel and want to upgrade or youвҖҷre starting from scratch, you can follow a simple formula to find out what will work best for your needs.

вҖңItвҖҷs a balance between your roof size вҖ” because youвҖҷre not going to be able to capture more than what hits that roof in a given period of time вҖ” and how much water you actually use,вҖқ Capehart says.В

вҖңThe engineering formula for stormwater calculations is 0.6 gallons per square foot of roof,вҖқ Meier says. In other words: If, for instance, your roof area is 1,000 square feet, you would multiply that by 0.6 gallons. If you get an inch of rain, you could collect 600 gallons of rainwater from a roof that size.В

Read more: Need a lot of rainwater? Trade the barrels for IBCs!

Next, determine the amount of rainwater youвҖҷre likely to use. вҖңIf I am watering this much area, and I only have a 55-gallon drum, how effective is that going to be?вҖқ Sojka asks.В

If you already have an established garden, you can assess your water usage with a hose meter. вҖңTheyвҖҷre not expensive, and then you can see how much youвҖҷre watering,вҖқ Capehart says. вҖңWater by hand [with the metered hose], see how much water your plants need, and then you can think, вҖҳIf I was doing this every week or even more during the hot periods, what would that look like?вҖҷвҖқВ

While individual rain barrels hold about 55 gallons each, larger, aboveground tanks can accommodate 500 gallons or more. вҖңWhen you think about how much you might want [in order] to water a tree in a drought, for instance, it would be something like 1,000 gallons,вҖқ Capehart says.В

If you get frequent rains, you might not need a behemoth storage tank. But if rain is scarce, itвҖҷs better to capture as much as you can while you have the chance.В

Before you spend a dime on barrels, tanks or cisterns, check in with your county extension agency or water resource board to make sure youвҖҷre legally allowed to harvest rainwater where you live.

LetвҖҷs say youвҖҷve secured the all-clear and you think youвҖҷve got the numbers and sizes of your catchment tanks all figured out. ThatвҖҷs a good start, but itвҖҷs just the start. вҖңThe top mistake I see people making is selecting the wrong downspout to harvest from,вҖқ Meier says. вҖңJust because you have a downspout on the house doesnвҖҷt mean that you have a lot of water coming off of it.вҖқВ

He recommends locating the largest area of your roof thatвҖҷs being drained and harvesting from that particular spout. Also, be sure the pipes that go from the roof gutter to your rain barrel are large enough to capture even very heavy flows.В

You should also take care to divert your barrelвҖҷs overflow well away from your homeвҖҷs foundation. вҖңWe have to think about what happens with failure,вҖқ Sojka says. вҖңWhat happens if the little spigot at the bottom of your rainwater container starts leaking? Where is that leak going to go?вҖқ

To get good use from your collection system, you may want to incorporate a small pump or elevate your barrels in order to increase your potential water pressure.

вҖңWe recommend a 2-foot elevation on the barrel,вҖқ Meier says. вҖңThat will give a little bit of water pressure, but itвҖҷll also make that water higher, so that it can flow better to the spots youвҖҷre trying to water.вҖқВ

Still, donвҖҷt expect to use just any standard drip irrigation hose with this setup. вҖңMost drip irrigation needs at least 20 psi, and youвҖҷre not going to get that from a lot of smaller rain tanks,вҖқ Capehart says. вҖңBut there are things that you can use that are very low psi like certain irrigating tapes.вҖқ

Incorporating a drip system is a much more efficient use of water. вҖңYou will extend the duration that you can use your rain barrel, and, because [the drip system] waters slowly, the roots of the plants have a longer time to absorb moisture,вҖқ Meier says.В

If you do choose to use a specialty drip hose or irrigating tape, watch for sediment build-up. вҖңDrip hoses can clog pretty easily, if you are not careful about water quality,вҖқ Sojka says.В

Your rainwater quality partly depends on the degree to which you maintain your catchment system. вҖңRain is pretty clean вҖ” especially if you do some prefiltration before it hits the tank,вҖқ Capehart says. At minimum, that means keeping roof gutters clean and free of leaves, sticks and other debris.В

If possible, you should also keep your tank in the shade. This will help to reduce or eliminate algae growth in your rainwater storage containers. (And, in the case of plastic catchment systems, the less exposure to plastic-degrading UV rays, the better.)В

Rainwater collection systems should also be mosquito-tight. вҖңMake sure that you have sealed the openings with netting to prevent mosquito breeding,вҖқ Sojka says. вҖңAll of these are things that people need to think about, and they are not particularly hard. But it is a little more than just cutting off a gutter and dumping it into a barrel.вҖқВ

Once you have your system dialed in, rain harvesting can be downright fun. вҖңA really cool byproduct of rain harvesting is how you stay in closer contact with the seasons, the rainfall and the cycles of rain,вҖқ Capehart admits. вҖңThat does make it very exciting when it rains. And it is really high-quality water.вҖқ В

Susan Brackney is a freelance writer and author of the Insatiable GardenerвҖҷs Guide (Five Hearts Press, 2004) and Plan Bee: Everything You Ever Wanted to Know About the Hardest-Working Creatures on the Planet (Perigee Books, 2009).