How to Grow Celeriac

Though difficult to grow and unsightly in appearance, celeriac tastes delicious and pairs nicely with potatoes. 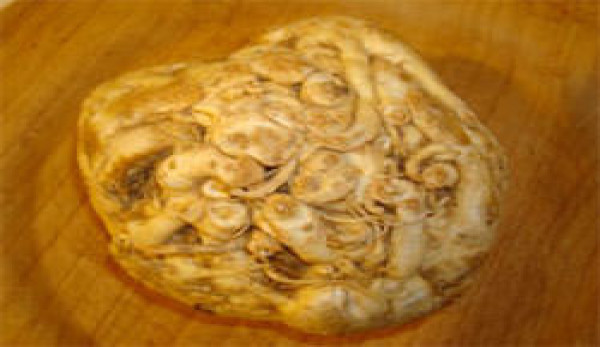 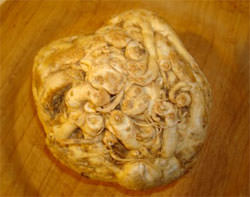 Celeriac may be ugly, but it sure is good!

While most other difficult and labor-intensive vegetable crops, such as Belgian endive and Italian red chicory are attractive vegetables, this weekâ€™s subject is easily one of the ugliest vegetables around. Celeriac, Apium graveolens rapaceum, is ugly, mostly unknown and has a well-deserved reputation for being difficult. But those who appreciate a horticultural challenge and can produce this vegetable, which is about the equivalent of a bowling ball, will find it tastes very good.

The reason celeriac and its close cousin, celery, are difficult to grow is that weather fluctuations can cause the plants to go to flower before they have undergone adolescence. Celeriac is a biennial, which means that when things go normally, the plant will produce a flower in the summer of its second year. But if a few cold days appear after a period of very warm days, the plants are sometimes fooled into thinking that it is already winter, and their metabolism shifts. Then, when the warm weather returns, the plant that thought it was just winter now thinks it is in its second summer and will start producing a flowering stalk.

When the celeriacâ€™s flower-stalk production starts, the edible quality of the vegetable quickly declines. What are desired, on celery and celeriac, are mature adolescents that have not yet experienced the adult desire to produce a flower; that is, plants that went through the summer without any flower-triggering events.

Celeriac is a plant from the swamps and appreciates a wet spot in the garden; arid soil can also trigger premature flowering. Surrounding growing plants in soil with high organic content and thick mulch helps keep the moisture content high in the growing environment. I like to bury some manure or compost below the surface of the bed in the fall in preparation for planting celery or celeriac in the late spring. There is absolutely no benefit to planting celeriac early; I find that growing seedlings inside, and strategically planting them outdoors at a later time, is the best plan for these temperamental plants.

When celeriac is planted in April or May, the root knob starts to expand in August and will keep growing until there is a really hard frost. A bit of frost seems to make the root mass a little sweeter, so the harvest usually occupies that position between the first small frost and the first big frost.

Iâ€™ll bet most readers have never eaten celeriac. If you can get your hands on some, try it raw or cooked; itâ€™s tasty either way. Itâ€™s sort of like a potato that tastes like celery, and those two vegetables are often cooked together. Just last night, I had celeriac and potatoes mashed together, which created an interesting flavor that was like a pleasantly exotic version of a baked-potato dish.