How To Grow Great Parsnips

Grow this sweet root crop and leave it in the ground to harvest all throughout the winter. 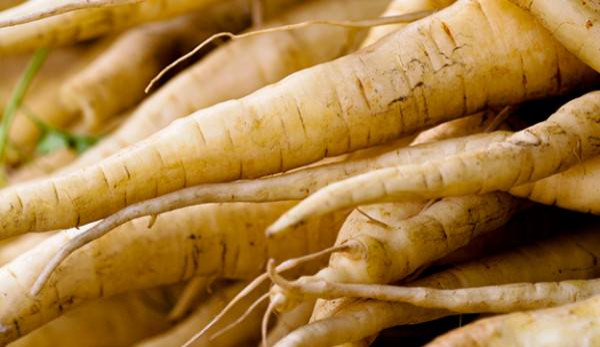 For the homesteader and market gardener alike, storage crops are a vital part of wintertime survival. Finding another storage crop as tasty as parsnips, however, is not an easy task. These long, sweet, tapered roots are an exciting addition to any winter meal, but because they take about three weeks to germinate and an entire season to fully mature, growing them comes with some challenges. Let’s break down what it takes to grow great parsnips, and next year, when it gets cold and the greenness of summer retreats, you can haul these fresh treats from dirt all winter long.

Spread 2 to 3 inches of mature compost on the area where you wish to grow parsnipsâ€”mature being the operative word. The parsnips will be in the soil for upwards of 120 days, so the growing plants will need plenty of nutrition: Compost thatâ€™s too immature could stunt or kill the young seedlings.

Prepare the beds as you might for carrotsâ€”slightly raised beds work wellâ€”broadforking if you can, then weeding like crazy. Because of their long germination period, they need a weed-free bed. Water the bed several times in the late fall or early springâ€”or bothâ€”then rake out the weeds, paying special attention to not to go more than a few inches below the surface, which will stir up new weed seed. A harrow is perhaps the best tool for this job, though a flame weeder or blowtorch can be effective, too. Cultivate often, then harrow one last time before planting in the mid- to late spring to avoid seed rot. In the South, you can plant in the fall for a spring harvest.

Most parsnip varieties require 120 daysâ€”or one full growing seasonâ€”to reach maturity. However, there are exceptions, like the Javelin, which only requires 110 days and is a great overwintering variety southern climates, intended for fall planting and a spring harvest. Other reliable varieties include Harris Model, Guernsey, Gladiator, Albion, Lancer and Andoverâ€”all of which have their own nuances, so read variety descriptions provided in your seed catalog carefully. Trial a few different varieties to see what works best in your soil and for your taste. 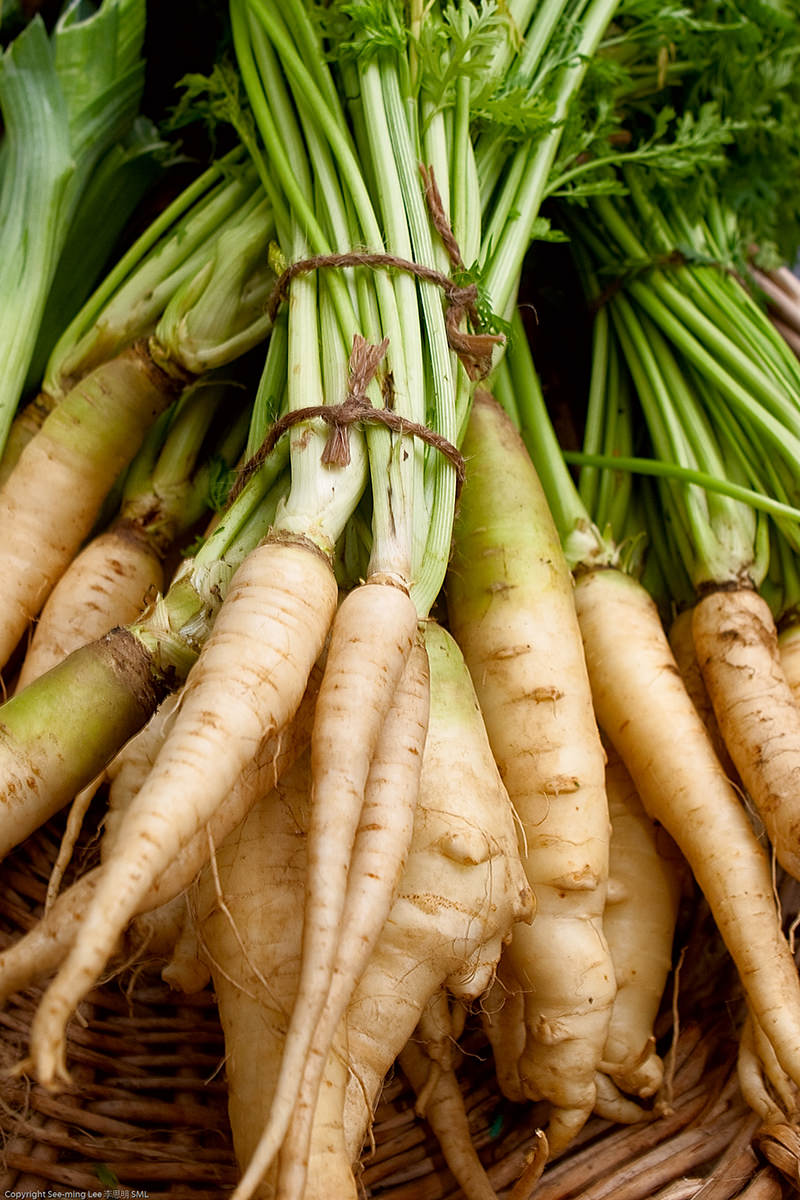 Parsnips can either be directly seeded into the soil or started in soil blocks. However, starting root crops like this in soil blocks is tricky and will require you plant them as soon as they begin to germinate to prevent the taproot from becoming malformed; direct seeding is the preferred method.

As soon as the ground is ready to be worked in the spring, sow fresh parsnip seed in a 2-inch band about 1 inch apart (20 seeds per foot) in 1/2 inch deep in rows 18 to 24 inches apart. I emphasize the word fresh, as the seed does not remain viable for more than a year. The seeds will germinate at fairly low soil temperatures, but somewhere between 55 and 70 degrees F is ideal. Once the plants have reached 6 inches or so tall, thin them to 3 to 6 inches apart.

Parsnips are one of those rare delicacies that have very few pest and disease issues, provided they are grown in healthy soil. What issues they do have, they tend to share with carrots: scab, rust, canker and carrot rust flies. Again, healthy, well-drained soil and good crop rotation are your best tools for avoiding these diseases. To prevent rust flies, cover the parsnips with row cover, especially if you already have an issue with them in your carrots.

Parsnips do OK in drier weather once they’ve made it past the seedling stage because their taproots will seek out moisture deep on the soil. Itâ€™s a good idea to keep the seed beds moist for best germination and to water in extremely dry spells.

While they are germinating, and for the first month or so as the seedlings emerge, it is good to keep the ground cultivated to help retain moisture and discourage weed pressure. Benedict Vanheems of GrowVeg.com recommends planting radishes in the row with the parsnips as markers, so you can run a hoe between between the rows to eliminate sprouting weeds without hurting the parsnips. “The radishes are removed for eating at pretty much the same moment all the parsnips are finally through,” Vanheems writes. Once the plants have reached a substantial heightâ€”a few inches or soâ€”consider mulching them for the rest of the season to retain moisture and to refrain from having to cultivate after every rain.

After your first frost, mow or cut the dying leaves, and wait until your first hard frost, when the roots become good and sweet, to begin harvesting. The beautiful thing about parsnips is that they store best right in the ground. This allows you to harvest them as needed throughout the year, and the best part is they only get sweeter with time. Cover with mulch in regions where the ground doesnâ€™t freeze solid for the winter, or dig up the roots and store as you would carrots in a dry, cool area, such as a root cellar. 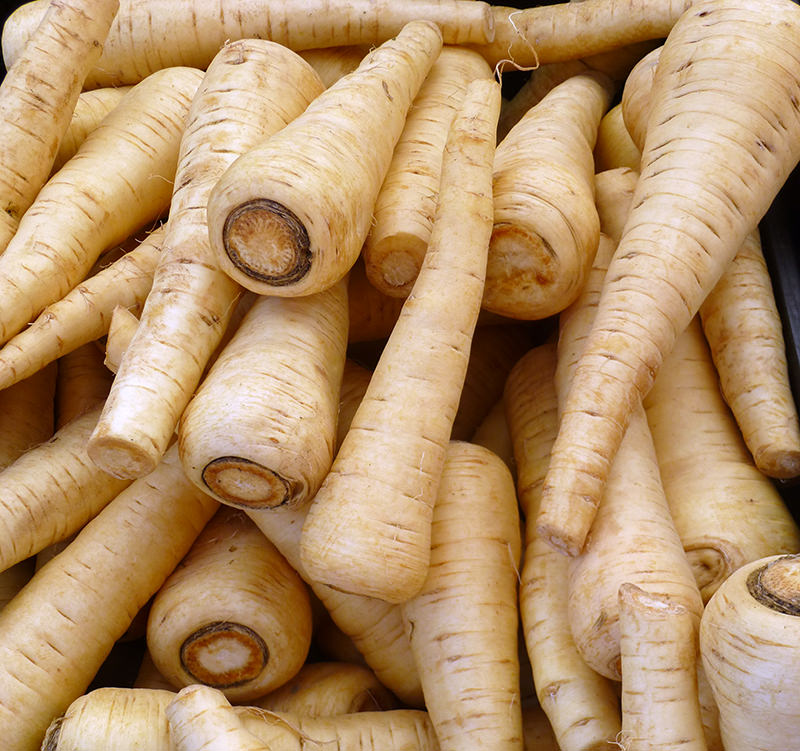 Dig the remaining parsnips before spring, as they will lose flavor and begin to regrow. The garden is a muddy place in the winter, so consider covering the area you plan to harvest with opaque white plastic or something that will keep the ground cool, but also dry, even if in small sections. Mulching helps, too, as it will wick up some of the moisture.

Because parsnips are biennial plants, to save seed, you must allow the roots to regrow in the spring, then go to flower. Once the seed heads have mostly dried, cut them off into a paper bag and allow them to dry further. The seeds are small, so screening works better than winnowing. Store the seeds in a cool place or reuse immediately. Do not store for more than a season if possible. As Suzanne Ashworth points out in her must-have book Seed to Seed (Chelsea Green, 2002), “Parsnip seeds are extremely short lived, remaining viable for only one year, even when stored well.”

Although there will definitely be savvy market customers who will seek out and recognize parsnips, you can always count on chefs to buy them up: Parsnips make great purĂ©es to make pies and soups all winter long. If you don’t have a great restaurant scene in your area, consider sampling roasted parsnips at your farmers market booth or handing out recipe cards. People like to try new things, but you have to make it easy for them.

A Word Of Caution

The leaves of the parsnip plant have been known to cause rashes on certain people. Some individuals seem to be more affected than others, but wear gloves when thinning or weeding in the parsnips to avoid this rash.