How To Grow Quality Hay

Your pastures can offer one of the most valuable crops grown on your land: hay. 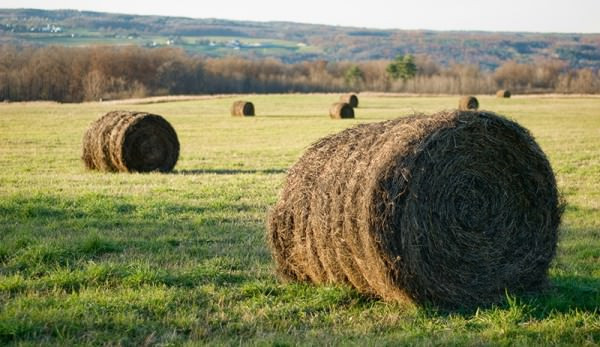 For many farmers, growing your own hay to feed your livestock is one satisfying step closer to a self-sufficient farm. If youâ€™re lucky enough to have several large, open fields on your farm, growing your own hay can be a very viable project. But as with any crop, growing hay has its share of complexities and challenges that must be considered before you get started. Here are some tips to help you grow quality hay.

Growing quality hay requires a combination of weed-free fields and good weather. One of the keys to growing quality hay is harvesting it at the appropriate time, before the seeds of grass hay mature and before legume plants bloom. Once the hay begins to mature, the amount of nutrients can diminish quickly, leading to lower-quality hay that is less nutritious.
Hay cannot get wet once itâ€™s been cut, as this further reduces the nutrient content and can cause the hay to mold once itâ€™s been baled. Growing quality hay can be a careful balancing act between cutting at the time of peak nutritional value while avoiding rainstorms and cutting only during stretches of dry weather.

There are many different types of hay that you can grow, and which you choose will vary depending on where you live. Some of the most common include:

To grow quality hay, youâ€™ll need to sample your soil to determine if any fertilizers or soil amendments should be applied. As mentioned above, ample nitrogen is important for grass hay, while for legumes, phosphorus and potassium are key soil nutrients. To ensure that the soil pH level is appropriate for growing hay, limestone may need to be added several months in advance of planting. Having an expert test your soil and recommend fertilizer amounts can help ensure that your soil is well-prepared for growing hay.

The amount of hay your fields can produce will depend in great part on the number of important nutrients available in the soil, so supplying fertilizers every few years can help you to greatly improve yield. Rotating the crops you grow in your fields can also be helpful, especially with alfalfa, which doesnâ€™t perform as well when grown in the same fields for too many years. Alfalfa does better growing in fields that have previously been used for crops in different plant families, such as corn.

Moisture content and pests are two of the main challenges of growing quality hay.

Hay must be dried in the field after cutting to avoid mold growth. For small square bales, a moisture content of around 20 percent or less is fine, but for large square and round bales, the moisture content will need to be lowerâ€”as little as 15 percent. Hay moisture meters can be purchased to give you an accurate measurement.

Insect pests, such as alfalfa weevils, can also be serious problems. For large infestations of alfalfa weevils, which can destroy an entire crop of alfalfa, spraying with insecticides may be necessary, although another solution is to cut the hay earlier than usual, which kills the weevils while preserving the hay from further damage. Consult an expert to determine the best approach.

Itâ€™s also important to be on the lookout for blister beetles. Although they donâ€™t usually cause much damage to crops, blister beetles contain a bodily fluid that causes blisters, and horses that eat hay containing the beetles will develop internal blisters that can cause death. Blister beetles are usually found in bunches, and should you discover them in portions of your fields, it might be wise to avoid cutting those sections rather than risk baling the beetles in your hay.

When harvesting quality hay, there are a couple of factors to consider:

Depending on the weather and the length of your growing season, it can be possible to cut hay early in the year, let it regrow, and then cut it once or even twice more before fall arrives. These second and third cuttings can produce higher-quality hay that is prized among farmers.

When should you expect to cut your hay for the first time each year? Naturally, this will vary depending on your location and whether youâ€™ve experienced an early or late spring, but the typical time for the first cutting of alfalfa can range from as early as February or March in western states, such as California, to as late as June in northern states, like Wisconsin and Montana.

Shorter growing seasons also mean that you canâ€™t cut as late into the year as in areas with long seasons of warm weather. In many states, cutting season ends in September, but in a few lucky states the cutting season can extend into November. Alfalfa in particular can be tricky to cut at the right time of year.

Hay can be baled in a variety of shapes and sizes, depending on available equipment and personal preference. Small square bales and large round bales are the most common; large square bales that weigh similar to round bales also exist.
Small square bales require more handling than larger bales, but offer the benefit of being more manageable. Weighing between 40 to 60 pounds, they can easily be moved around by a single person, whereas machinery is required for moving large square and round bales.

In some respects, the quality of the hay you produce can be measured by its appearance and smell. Does it have rich color, or is it dull and gray? Does it smell fresh? Is it dusty? Does the hay have a high amount of leaf material (which has higher nutritional value), or have the leaves mostly shattered during cutting and baling?

But while a visual examination can tell you a lot about your hay, an official chemical test can tell you about the nutritional value of your hay. Several nutritional factors can be measured, including the crude protein content of the hay, which can help determine how much hay to feed to your animals and also gives you an idea of your hayâ€™s monetary value.
The National Forage Testing Association (NFTA) certifies labs to test hay, and having a NFTA-certified lab analyze your hay is the best way to get an accurate measurement of its nutritional values. The Penn State Extension has more information.

If youâ€™re able to produce more hay than your animals need, good for youâ€”youâ€™ll have some left over to sell! However, choosing how much to charge for your hay can be tricky and will vary depending on where you live.

The first step is to add up the cost of producing your hay, taking into account all expenses involved such as the cost of seeding, fertilizers, hired help, and running the equipment. Adding up all expenses and dividing by the number of bales produced can give you the cost per bale, the perfect starting point for setting your price. Research what other haymakers in your region are charging per bale. If you find that offering a competitive price means you canâ€™t make a profit, you might be better off keeping your hay for your own use. On the other hand, if you have produced top-quality hay, you might be able to charge a higher price than your competitors and still find buyers.

Growing quality hay requires a lot of patience and effort, but these tips should help get you started.