How To Grow Pumpkins

Growing pumpkins and squash is simple. Use these tips to get your pumpkin patch started. 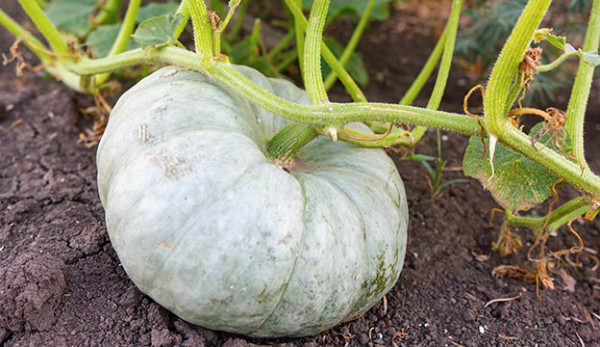 Any pumpkin-growing foray should start with the same thing: space‚Äîand plenty of it. Choose a location for growing pumpkins with a minimum of six to eight hours of full sun and a lot of room; vines can grow to more than 20 feet long.

Pumpkins prefer well-drained soils high in organic matter with a pH of 6 to 6.5. (Testing your soil in the fall allows you to adjust the pH accordingly before spring planting time arrives.) For all but the northernmost zones, pumpkins can be planted from seed after the danger of frost has passed and the soil temperature has reached 60 degrees F. Northern growers can¬Ýstart pumpkin seeds indoors in peat pots three to four weeks before transplanting them outdoors, again, after the danger of frost has passed.

‚ÄúWe‚Äôve been experimenting a little with this,‚Äù Voll says. ‚ÄúTypically, we‚Äôve plowed and worked the ground into a fine seed bed. We still do a lot of that, but I‚Äôve started doing more strip tilling. I have a machine that uses a sub-soil tooth, and then with a few disks and a rolling basket, I get a great seed bed in one pass. It saves time and is reducing the erosion and helping the soil. I will typically do this in a rye field or an old hay field so that the organic matter on top then helps with erosion and keeps the weeds down. We‚Äôve also planted some on plastic. We use trickle irrigation under the plastic and have gotten great results.‚Äù

The pumpkin flowers are pollinated by insects, including many species of bees, flies and beetles (including the dreaded cucumber beetle), so to maximize pollination, plant plenty of flowering plants in and around the garden. The more flowers you have around, the more pollinators will be present in the garden. Hand pollination is possible, too; although, it‚Äôs only necessary if problems with pollination have occurred in the past or you need to control pollination for seed production.

Once the pumpkin seeds have germinated, mulch between the plants very well.

‚ÄúWe use a good bed of straw,‚Äù notes Gettle. ‚ÄúOnce the vines get growing, it‚Äôs hard to weed around them. And the straw keeps the fruits clean and off the ground.‚Äù

‚ÄúRow cover is probably the No. 1 way to control squash bugs organically,‚Äù he says.

The row cover should stay in place while the pumpkin plants are young and vulnerable; it serves as a physical barrier between the plant and the pest. The cover is then lifted when the plants come into flower to allow for pollination. By that time, the pumpkin plants are mature enough to fend off any subsequent attacks, and the fruit are more likely to reach maturity. It helps deter cucumber beetle damage, as well.

With many types of squash and pumpkins, powdery mildew is likely to be an issue, especially during rainy summers. This dusty, white mildew appears on the leaves and is prevented, first and foremost, by choosing resistant varieties; secondly, by spacing plants properly to provide adequate air circulation and allow plants to dry quickly; and thirdly, with regular applications of potassium bicarbonate-based fungicides or compost tea. Although powdery mildew seldom kills plants (it‚Äôs primarily an aesthetic issue), when combined with pest issues or other plant stressors, it can result in plant death or decreased production.

‚ÄúThe weather has always been our biggest challenge,‚Äù says Voll. ‚ÄúRainy, wet seasons make it tough with diseases like powdery mildew and also at harvesting time. But hot and dry makes it harder for watering and keeping the size up on the pumpkins.‚Äù

As the growing season progresses, the pumpkin fruits will begin to set and mature. You‚Äôll know they‚Äôre ripe when the rind hardens and the vine begins to die. When the fruit is fully ripe, the skin should be tough to puncture with a fingernail, and the mature skin color should be fully developed. When harvesting pumpkins of all types, leave the stem on as long as possible. If it breaks off, the fruit will start to rot at the stem base, and the storage capacity is greatly diminished.

All types of winter squash, including pumpkins, are best stored on cardboard sheets in a cool place like a basement or a root cellar. Depending on the variety, expect a shelf life of anywhere between two months and one year.

Horticulturist Jessica Walliser is an award-winning radio host on KDKA Radio‚Äôs ‚ÄúThe Organic Gardeners‚Äù in Pittsburgh. She‚Äôs the author of five gardening books, including the Amazon-bestseller Good Bug Bad Bug, winner of the 2014 AHS Book Award Attracting Beneficial Bugs to Your Garden: A Natural Approach to Pest Control, and her newest title Container Gardening Complete: Creative Projects for Growing Vegetables and Flowers in Small Spaces. Jessica also writes two weekly gardening columns for the Pittsburgh Tribune-Review and is co-owner of the website SavvyGardening.com.