How To Grow Your Own Hops

Give a hyper-local flair to your home-brewed beer by growing your own hops. 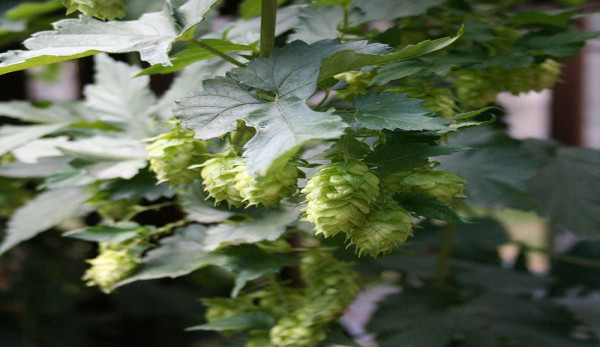 Growing your own hops can be a rewarding and economical addition to a home brewery or craft brewery, as well as a visually stunning addition to a garden. They just have some particular demands that you‚Äôd better be prepared to meet. But more about that later. First, let’s meet the plant.

Botanically, hops (Humulus lupulus) is an herbaceous perennial with a quick growing bine. (That‚Äôs not a typo, a bine is distinct from a vine in that it doesn‚Äôt have suckers or tendrils to help it climb.) The bine shoots up every spring from an overwintering underground rhizome, and in the fall, they‚Äôre harvested and the cone-like “flowers‚Äù (actually bracts) are dried to serve as the delightfully varied ingredient that has become the heart of much of today‚Äôs craft brewing.

Modern and traditional herbal remedies also make use of hops. Hop pillows, for example, are stuffed with dried hop cones and intended to exploit the soporific effect of hop oils. The hop is a botanical relative of both chamomile and cannabis.

Now if you brew, want to make other use of the complex hop chemistry or just want to add a stunning visual to your garden, it‚Äôs time to talk about those particular demands I hinted at.

The No. 1 thing that a hop plant needs‚Äîand that you really had better be able to give it‚Äîis a support to climb. It‚Äôs been said that telephone poles were built for hops, and that‚Äôs not far from the truth. It‚Äôs not unheard of for mature hops to reach heights of 20 feet or more, and a hop denied the climbing space it needs will find something‚Äîanything‚Äîto latch onto or else tangle itself into a confused and unhealthy mass. Fences, gutters, electrical or telephone wires, other plants: All are fair game as hops supports.

While hops can be persuaded to grow horizontally, their natural behavior is to reach up so it‚Äôll require more intervention to train them laterally, particularly whenever a horizontal-growing bine runs into a post or other excuse to turn and go up. Dwarf varieties top out at about 12 feet and ornamental varieties grow even smaller than that, though my experience is that dwarf brewing-hop stock is hard for the small-scale grower to find.

The best way to give a hop bine the climbing space it craves is to do what commercial growers do: Hang a twining structure down from above. Hop plantations have complex trellises built of wire strung between tall poles, and from this, twine is hung down for the hops to climb. I‚Äôve seen hops growing up twine hung from the eaves of a multi-story home, barn or brewery. Come harvesting time, just cut the twine at the top and let the hop bine flop down onto the ground. Now harvesting is easy! If you use this approach, select a sturdy garden twine that can handle the weight and will provide a good gripping surface. You‚Äôll probably want to anchor the twine at the bottom, as well, and help the sprouting bine find it and get started for the first 6 to 12 inches.

The hops harvest takes place in the fall, when the cones are starting to dry out and are full of yellowish, aroma-laden powder. In the damp coastal Pacific Northwest, where I live, this was like playing a game of chicken with the coming wet season and the onset of mold and mildew. For two years in a row, I left for a professional conference in early October with my hops almost ready to harvest and came back a week later to find them spotted with mold. A drier climate, such as that of eastern Washington or Oregon, is perfect.

Once the bines are cut down, pull the cones off and let them dry. I have good success using our food dehydrator on the “fan only‚Äù setting. Once dry, hops will keep for perhaps 6 months fresh and a year or so if frozen. Pack them into zipper-topped bags and squeeze every bit of air out that you can‚Äîoxygen breaks down the aroma and bittering compounds‚Äîand toss them in your freezer. Another option is “wet hopping‚Äù or adding undried hops to a brew immediately after harvest. This gives a fresher, more herbal and floral aroma to the beer, in addition to a real once-a-year gravitas to that batch!

Where To Site Your Hops

When siting a hop garden, keep in mind that they are sticky, prickly beasts. It goes with the climbing plant territory, of course, but some people can also have an adverse rash-like reaction to the oils secreted, so wear gloves when harvesting. Beyond giving them the height and support they need, plant yours somewhere your guests can admire the foliage but don‚Äôt have to get up close and personal with it.

Like most fast-growing plants, hops are heavy feeders, so make sure they get plenty of nutrients. Generally hops prefer a fertilizer with a nitrogen content about half that of potassium and phosphorus, though some growers will start off with a high-nitrogen formula during the spring growth period and then switch when cones start to appear. However, hops are pretty tolerant of soil pH: Anything between 5.5 and 8.0 will do fine.

Hops are also prone to a range of fungal diseases, so ensure the soil is well drained to prevent wet feet and that the plants are well spaced and well ventilated. From experience, I can say this makes a big difference: Don‚Äôt try to plant too many bines too close together or they‚Äôll block the airflow that keeps the leaves dry and healthy. Many growers will trim the bottom foot or so of leaves once the plants are established to help airflow and reduce rain splash. Hops will spread invasively if the soil conditions are good. It is important to control the spread of your plants or they‚Äôll end up crowding themselves out and being more subject to disease.

Hops are invariably grown from rhizome cuttings. Typically these are planted while dormant, in the early spring. Many homebrew-supply stores will take pre-orders starting early in the new year, and online retailers like FreshHops.com will typically start accepting orders as the planting season approaches. Occasionally nurseries will stock hop rhizomes as a seasonal exotic, but confirm you are buying a brewing hop (if that’s what you plan to do with them) and not an ornamental.

For the backyard grower, I recommend shopping for versatile, disease-resistant varieties. With their propensity for mildews and rots, disease resistance can do a lot to cut down on the grief of a lost harvest. For the brewer, even a single hop plant can produce a lot of hop cones, so my advice is to not plant an exotic, specialty hop or a super-high bittering variety you‚Äôll only use in tiny quantities, but rather choose a type with moderate bitterness that can find a role in several recipes. New varieties are being created all the time, so see what your seller offers and check the agronomic and brewing properties of each. In general, the newer U.S.-bred varieties are vigorous and healthy, and the classic “Four Cs‚Äù‚ÄîCascade, Centennial, Chinook (a favorite of mine) and Crystal (another favorite, great for dry-hopped cider)‚Äîwill serve you well in a lot of brewing.

Hops aren‚Äôt a crop for every grower. If denied the space‚Äîparticularly the vertical space‚Äîthey need, the results can be messy and frustrating. But if you‚Äôve got the room and you want to do something dramatic, to add an “I grew this‚Äù aspect to your “I brewed this,‚Äù then give them a try.

About the Author:¬ÝNick Strauss is an all-grain homebrewer with more than 13 years of experience. He and his wife own a small homestead in the Pacific Northwest and blog about homebrewing, homesteading, cooking and more at¬ÝNorthwest Edible Life.¬Ý

Nick Strauss writes about homesteading, poultry keeping, homebrewing, and coexisting with a corporate day job from just north of Seattle, where he and his wife, Erica, share an industrious and verdant 1/3 acre with two kids, ducks, chickens, and a lot of veggies. He is a contributor to other homesteading and brewing publications and occasionally guest posts on Erica's successful homesteading blog, Northwest Edible Life.